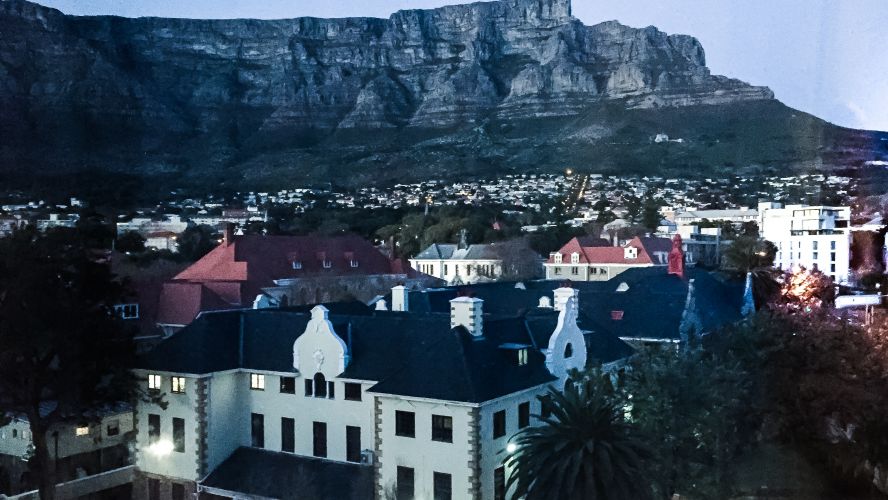 The heart of our trip to South Africa was the visit to Cape Town.  It is the oldest city in South Africa and the continent with waterfront and a coast that would take us to the Cape of Good Hope.  We are going to go on a small safari up the mountains, then a tour of the wine country.  It is going to be a remarkable experience!

View of Mountains around Cape Town

The trip is a little over an hour by plane. With the exchange rate being so favorable, we treated ourselves to first-class seats on British Airways (BA). BA was priced higher than South African Airways or the regional airline called Mango. Our experience in Johannesburg made us gun-shy about taking the local alternative.

BA flies directly to Cape Town from London and other cities in the U. K. There is a large English population base in Durbin. Durbin is very English, while Cape Town is more Afrikaaner.

While we successfully avoided transportation mishaps similar to our experience in Johannesburg, we encountered, however, another "event" at the domestic airport.

We had to get our boarding passes via the BA kiosk before dropping off our bags at the BA counter. A gentleman approached us to escort us to the BA kiosk. We asked him if he was with BA, and he said, yes, although I did notice that he wasn't in a BA uniform (That should have been a big hint!)

At the kiosk, he took our reservation confirmations and punched the information requested. He seemed to have a problem with the machine, so he spoke in Zulu to a BA representative (in uniform), who was standing by the kiosk, for clarification. He was able to secure our boarding passes, and he took us and our luggage cart to the Business Class check-in line. Before getting there, he asked us for payment for services rendered. My husband obliged with a few bucks, maybe 100 Rand.

Another gentleman approached us, demanding money. When we objected, he started arguing with the other person with us.  At this point, we just left and headed to the BA counter.  In this whole melee, we figured out that there are many "expediters" who offer assistance or just prey on tourists.

Our itinerary would take us to a small private game reserve about three hours outside of Cape Town called Aquila. Our friend, Tom, had stayed there several months ago and said it was a beautiful place and worth a trip.

My husband arranged transfer service from the airport to Aquila then from Aquila to Cape Town.

We had no problem spotting Johann, who had our name on a signboard. Johann was a native Afrikaaner who had lived in Cape Town all his life. He owned the transportation and tourist business, and he promised to impress us by taking the scenic route to Aquila.

We were quite surprised at how mountainous and lush the countryside was. We drove on winding roads going up 3500-4500 feet. It was a beautiful sunny day, but quite cold. We took a lot of pictures, but he made sure to warn us to keep the car doors locked. I guess you have to be cautious everywhere in South Africa, even in the mountains.

Aquila was rustic. It had several buildings in the complex that included a restaurant, a lounge, a mid-rise hotel building, and several cottages. The lobby was small, with spa facilities connected to it. The rooms overlooked the reserve, and you could see animals roaming the grounds.

Aquila is a 300-acre park that is about 15 years old, relatively young as far as reserves go. For all its rustic feel, the accommodations were very comfortable, and the service was friendly.

Most private game reserves are animal rescue and sanctuaries. Many of the animals in the shelter are never be released into the wild because the animals get used to being fed and would not survive. We would have enjoyed Aquila more if it was "in-season." It was freezing, and you could not enjoy the outdoor facilities. We went on a safari, which started very early in the morning. We sat in an open truck, and despite having several blankets, it was still freezing.

We realized that the reserve was quite small. You can count the number of animals per species on the one hand. There were precisely TWO elephants and a handful of lions.

We looked forward to every meal at Aquila. The meals were western fare but, where farm to table fresh. Most everyone would want to experience the local menu, but you would be hard-pressed to find a restaurant that served ethnic African food, at least in Cape Town.

We ended up leaving a day early. We would have loved to have enjoyed gazing at the southern hemisphere skies, but the weather was cloudy and, again, quite cold. We didn't have much to do after the safari, so we called Johann to pick us up a day early to take us to Cape Town. 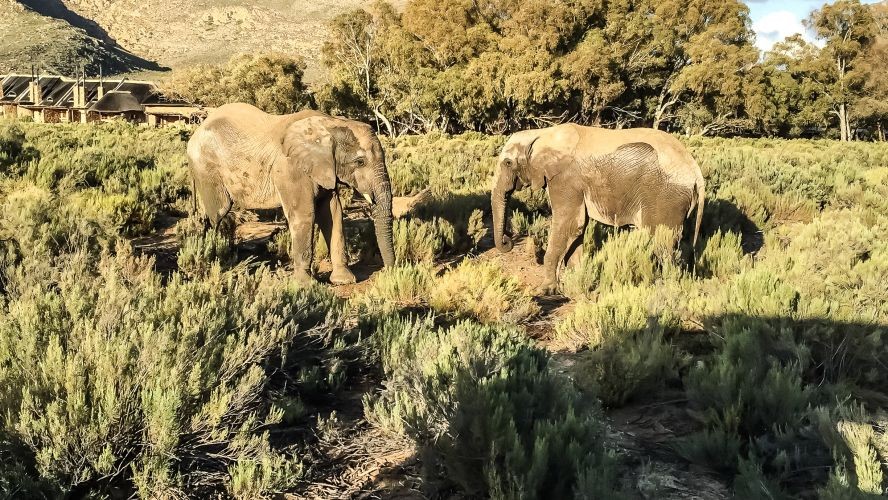 The Gem That is Cape Town

Cape Town is marvelous. Table Mountain is majestic. This iconic landmark, with its flat top, is about 3500 square feet high with a flat top that is two miles wide. There is cable car service to the top, but was being serviced at that time.

Cape Town is like a bowl surrounded by several mountain peaks. Table Mountain is at the north end of the spine that forms the Cape Peninsula that terminates 100 miles to the south of the Cape of Good Hope and Cape Point. Cape Town is a city between sweeping mountains and deep blue coastal waters.

Johann took us to the Marriott Protea Victoria hotel, which was close to the harbor. It appeared to be a completely renovated brick warehouse. The rooms were modern lofts with a nice kitchenette and a great espresso machine!

We discovered, however, that it was a long walk to the harbor. It entailed walking through a highway underpass to get to the main road. We did not feel safe walking the few blocks under the highway. It was dark and shadowy and clearly, risky.

We wanted to eat out that night but decided to eat in. The street outside our window looked dark and desolate. We were paranoid at this point decided to move to another hotel the next day.

I chose a Marriott Protea African Pride hotel, which was more upscale. It was a cab ride to the harbor, but we did not mind. The hotel was beautiful and comfortable with excellent service!

We settled to enjoy the Albert and Victoria Waterfront, the primary destination in Cape Town. It has a lot of hotels and restaurants and some very unique retail shops. I found the jewelry of semi-precious and polished stones to be inexpensive and walked away with a few purchases! You can watch the sunset over the ocean from the harbor

My husband and daughter visited the Aquarium, which was on harbor grounds. I took the Hop on Hop Off bus to see some of the coastal towns to see where people lived.

The beaches were beautiful, but I sensed they were not swimming beaches. The wind was too strong, and the South Atlantic waters too rough. It is because of the strong winds that neither the Atlantic nor the Indian Oceans here warms up enough. Shipwrecks are not uncommon. 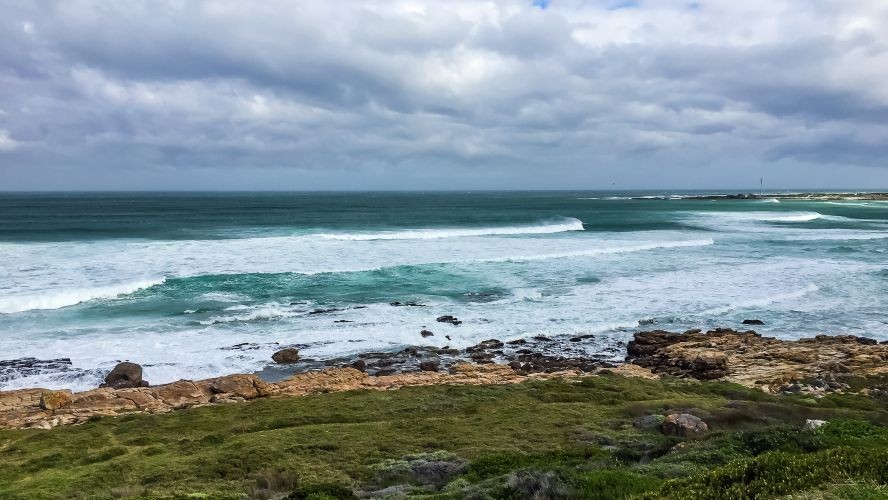 Located on the shore of Table Bay, Cape Town was first developed by the Dutch East India Company as a supply station for Dutch ships sailing to East Africa, India, and the Far East.

Until the gold rush, which developed in Johannesburg in the mid to late 1800s, Cape Town was the largest city in South Africa.

Jan van Riebeeck established the outpost in 1652. The settlement grew slowly due to the labor shortage, prompting authorities to import slaves from Indonesia and Madagascar. Many of these people became ancestors of the first "colored" communities in South Africa.

Great Britain took control of the Dutch colonies in 1795 but returned to the Dutch in 1803. Between the Dutch and Great Britain, the Cape changed hands several times, but Britain gained it in 1814.

The discovery of diamonds in Griqualand West in 1867 and gold in Witwatersrand in 1886 prompted a flood of immigrants to South Africa.

Conflicts between the Boer Republics and the British colonial government resulted in two separate Boer Wars, which Britain won.

In 1910, Britain established the Union of South Africa, which unified the Cape Colony, with Cape Town being the legislative capital. It later became the Republic of South Africa.

In 1948, the National Party won on a platform of "apartheid," and we all know the history that followed with Nelson Mandela that ended apartheid.

Wine Country and the Cape of Good Hope

On the second day of our stay, my husband booked a Tours by Locals guided tour to show us the wine country and the Cape of Good Hope. Johann had given us a meandering journey of the wine country on the way back from Aquila, so we were looking forward to sampling South African wine.

Franschhoek, which is Dutch for a french corner, is one of the oldest communities in South Africa dating back from the mid to late 1600s. Settled by 176 Huguenots, it was named "Le Coin de France" or the corner of France, later translated into Dutch.

The French were invited by the then governor, Simon Van Der Stel, who had established a community the prior year. The Dutch were very interested in improving grape production and their wines to ward off scurvy for sailors traveling the Dutch East India route. French settlers brought their agricultural and wine expertise. 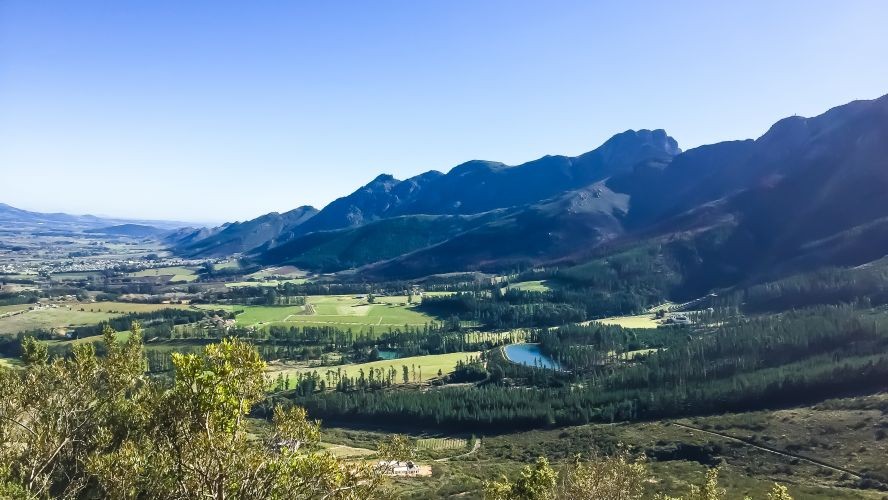 There is a common misconception that the Cape of Good Hope is the southernmost tip of Africa. The Cape of Agulhas is the tip, about 90 miles east-southeast, is.

You will experience the strong winds on the funicular to the top. But what a view! 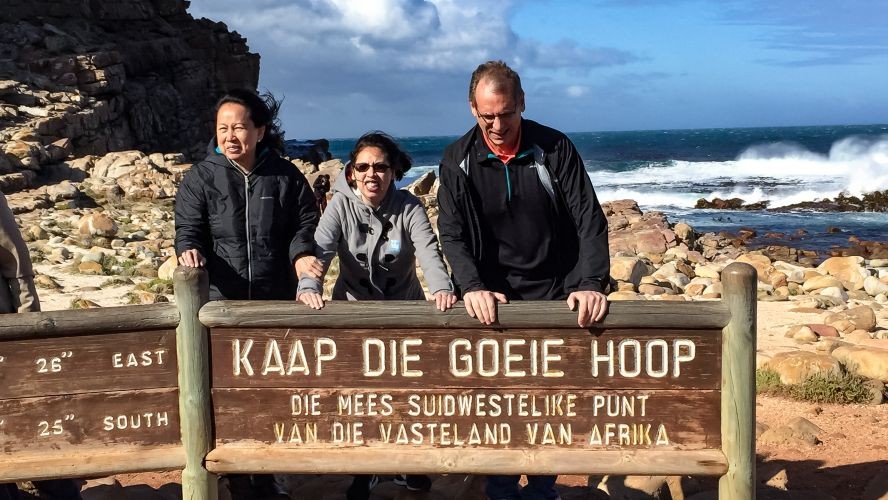 Our last stop was Boulder Beach to see the South African Penguins. The weather turned cold and rainy as we reached the beach.

The penguins were roaming freely around on the beach. There were no fences or cages. See the South African penguins! 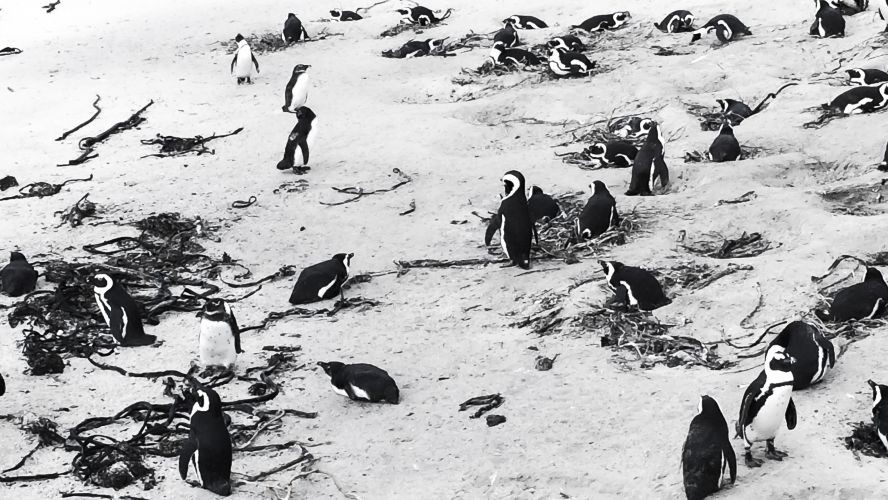 Four Friends and a King in Bhutan
Soweto, A Sprawling Urban Memorial of Complex Hist... 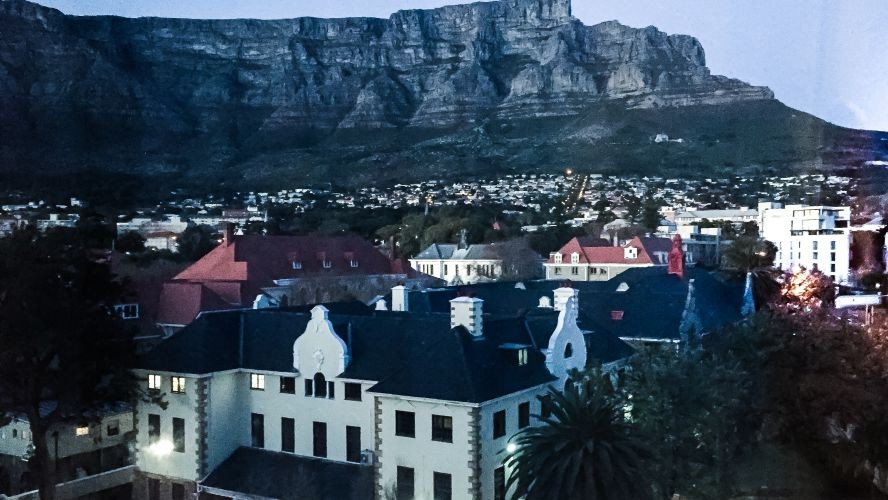 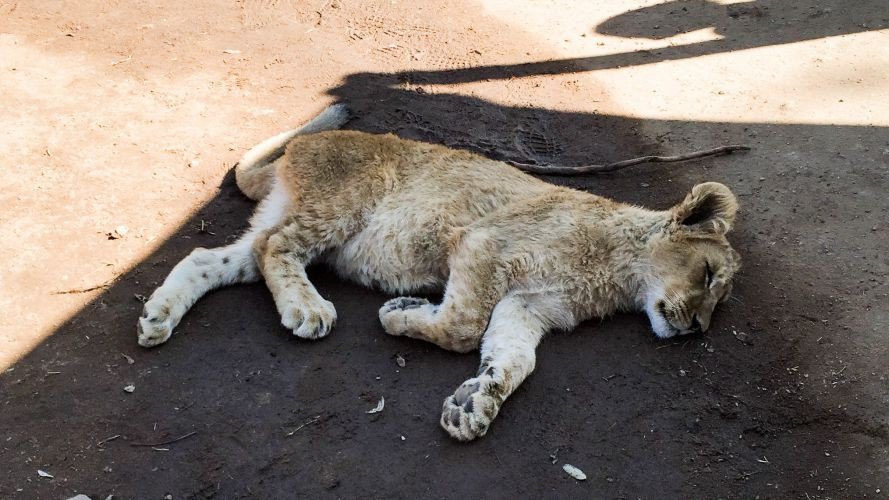 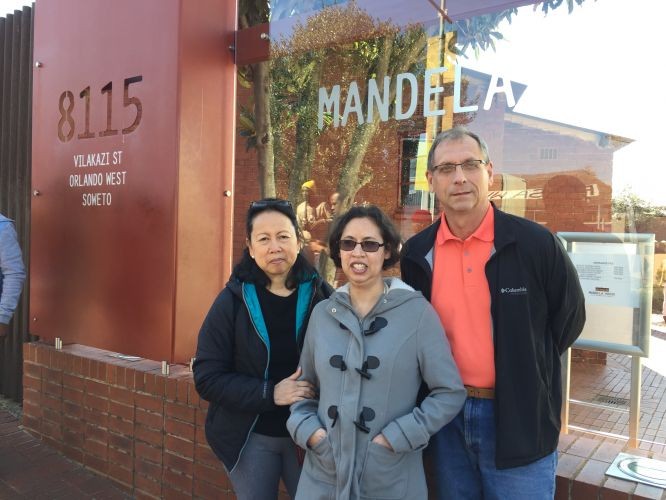