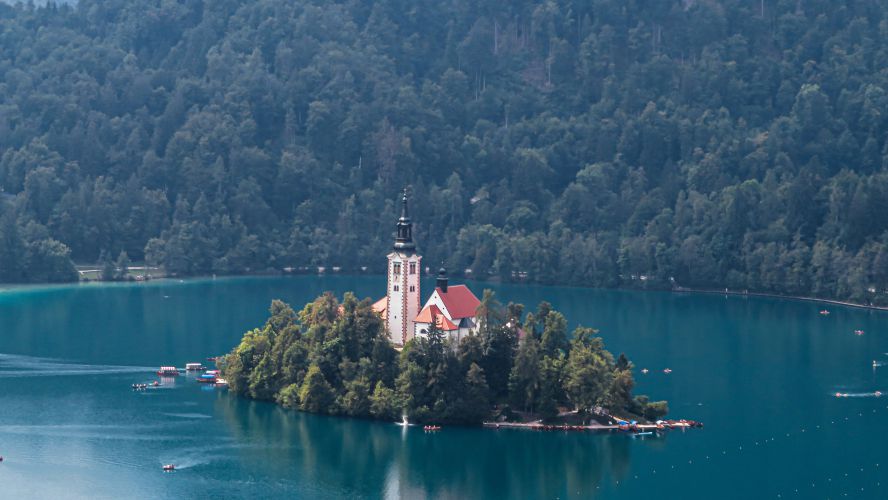 Lake Bled and Church of Annunciation
Most people will not know where Ljubljana is and that it is in the country of Slovenia. In our trip, we have been able to find relatively unknown cities that you never knew existed. These are little destination gems that deserve to be on your bucket list. Ljubljana in Slovenia is one of them.
Slovenia is an obscure little country that sometimes gets mixed up with Slovakia (of former Czechoslovakia). These are two different countries, of course. We've been to Slovakia, but Slovenia is much more scenic. Slovenia is mountainous, and it sits at the end (or beginning) of the European Alps. It has beautiful, clean, clear lakes and streams with glacial waters coming from the surrounding mountains. The country is very green, with half the land covered by forests.
Believe it or not, it is a country with 90,000 beekeepers-strong. That's in a state of only two million people. With the rich forest, they are "swarming" with bees. Pardon the pun. No worries, the Carniolan bees are of the non-threatening variety.

Finally, if you didn't know, Melania Trump is from Ljubljana. Here, half the people like her, and half don't. Nothing has changed! 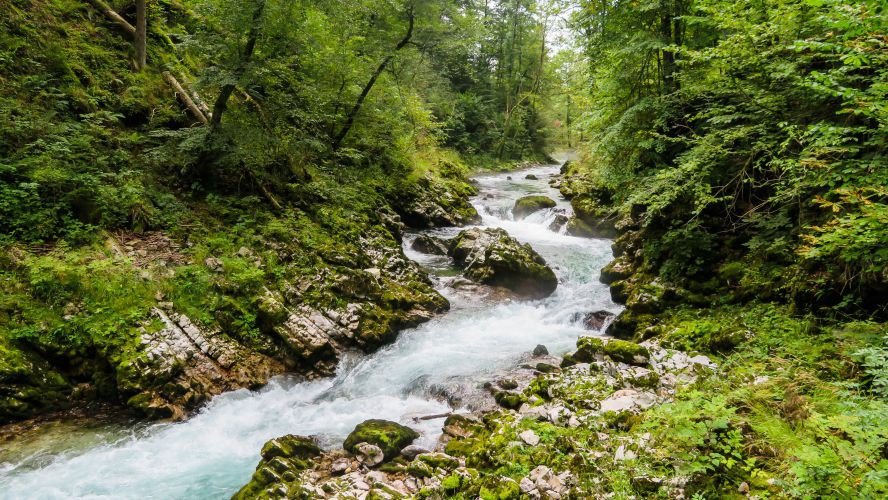 When we expressed our amazement at Slovenia, the most common response was, "What?" We asked the same question of ourselves in planning the trip. We were going to be in Venice with family, and we knew we were going to be overwhelmed with tourists. We wanted to continue to Florence after Venice. Still, We decided that we did not want to join the masses of tourists that throng the Italian Trifecta of tourist destinations (Venice-Florence-Rome) in the middle of a hot summer.

We were pleased to discover that Ljubljana, Slovenia was close to Venice within easy driving distance.
Here's your introduction to Ljubljana:

Slovenia is a small little country wedged in the hollow in between northeastern Italy and Croatia. Austria and Hungary hover to its north, and the south is Slovenia's tiny shoreline on the Adriatic Sea and western part of Croatia and its coastline.

Croatia is the latest beach destination for Europeans, and also a popular cruise stop. Croatia has more than a 3000 miles coastline, including 1200 islands and islets strewn on its southeastern coast on the Adriatic (also called Dalmatian Coast).
Slovenia squeezes a mere 27-mile coastline too, but the country is mostly forest and mountains. Slovenia sits where the Alps ends (or begins). Half of Slovenia's landmass is forest.
Ljubljana, the capital, is smack in the center of the country at the foothills. If your schedule permits, you can take a train from Venice to Trieste and a bus or car service from Ljubljana. We opted for a private car pick up from Venice to Ljubljana and back for the three of us. The car service was reasonably priced, given the time savings and the luggage we carried for our 20-day trip. 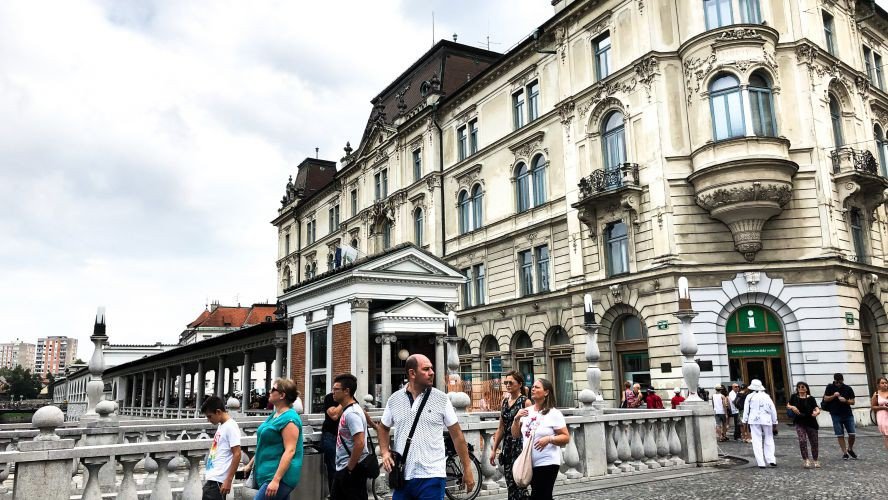 Who are the Slovenes?

Slovenes are considered South Slavs, which describe most of the peoples of the countries on the Adriatic coast from Slovenia to Bulgaria. South Slavs comprise 80% of the population, with 20 percent of Austrians, Italians, and Hungarians. It has a unique culture positioned between Slavic, Latin (Roman), and Germanic cultures. The language is Slovene, but Italian and Hungarian are co-official languages. Because of its proximity to Italy, there will be a mixture of Latin and Slavic influences in language and culture.

History in a Nutshell

In general, Slovenia's history aligns itself with the neighboring powers, notably the Habsburg Dynasty of Austria and Hungary. Like many parts of Europe, Celtics were early dwellers in Slovenia, followed by the Roman Empire. First Slavic settlements appeared in around the 6th century, followed by Magyars (Hungary) in the 10th century. The Magyars passed on its rule to the Habsburg Dynasty starting in the late 13th century until 1918. It became a single kingdom of Slovenes under the Habsburg in 1848.

After the dismantling of the Habsburg Empire following WWI, Slovenia declared independence, joining with Croatia and Serbia to become the Kingdom of Croatia, Serbia, and Slovenia (later renamed the Kingdom of Yugoslavia). During WWII, Italy, Hungary, and Germany divided Slovenia. After Germany's defeat, it became part of the Socialist Federal Republic of Yugoslavia, a federation of six republics, namely Bosnia, Herzegovina, Croatia, Macedonia, Montenegro, Serbia, and Slovenia.

Slovenia was the first to declare its independence after the fall of the Berlin Wall in 1989. The democratic election was in 1990, then completed an independence transition in 1991. It is the only country of the former Yugoslavia that became part of the European Union in June 2004. It adopted the euro two years later in 2007. Slovenia is considered the most prosperous and stable of the former Yugoslavia republics, with a strong manufacturing base going back several decades.

You won't find the grand, historical monuments and buildings as you would find in other Eastern European capitals of Prague or Budapest. Ljubljana suffered a massive earthquake in 1895, which destroyed most of the city.

Ljubljana is in the middle of the country. Ljubljanica River, the city's namesake, runs through the town. The river served as Slovenia's main trading route going back to Roman times. Today, the river and its bridges are one of Ljubljana's key tourist attractions in Old Town.

Under Habsburg rule, in 1484, a town hall was built, with the city adopting its coat of arms with the characteristic dragon based on the myth of the Argonauts. They sailed the Ljubljanica River and defeated a dragon before settling in their home in Greece. You will see the dragon on one bridge crossing the Ljubljanica.

Ljubljana became autonomous in 1848, becoming the official capital of all Slovenes. On Easter Sunday, April 14, 1895, Ljubljana experienced a strong earthquake, with little loss of life, that destroyed a number of the buildings. It was the last destructive earthquake experienced in Slovenia, registering 6.8 on the Richter Scale. Reconstruction of the city began soon after with the invaluable contribution of the mayor of the town, Ian Hrbam, and architect and urban planner, Max Fabiani. Both designed and planned the city to what it is today.
After independence in 1991, an extensive building program took place in the town center and other sections. In the last decade, renewal of Old Town Square and the Embankments took place, making them pedestrian-only attractions 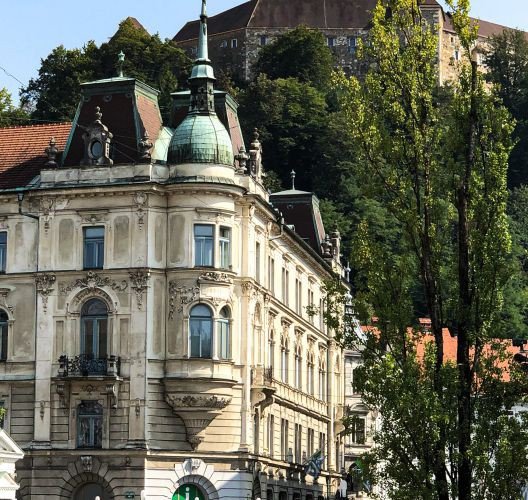 Best Sights In Ljubljana and Outskirts

You will be spending much of your time in the attractive Old Town Square (Preseren Square), where architect Joze Plecnik left his mark. You will be looking up or taking a funicular to see the Ljubljana Castle.

Converted to event space, you will not find historical elements. But you will enjoy lovely views of Ljubljana and surroundings!

The Triple Bridge is a unique and iconic sight of downtown Ljubljana. The bridge and many buildings in historical districts are triumphs of Joze Plecnik. They are Venetian-like bridges across the Ljubljanica River. The middle deck is the original bridge built in 1842 named after Archduke Franz Karl of Austria.

A bridge existed in the same location since 1280 but was rebuilt several times in the past. The bridge took both pedestrian and vehicular traffic. To maintain the bridge's beauty and practicality, Joze Plecnik designed angular bridges on each side of the central bridge in 1929. The expanded pedestrian-only bridge opened in 1932 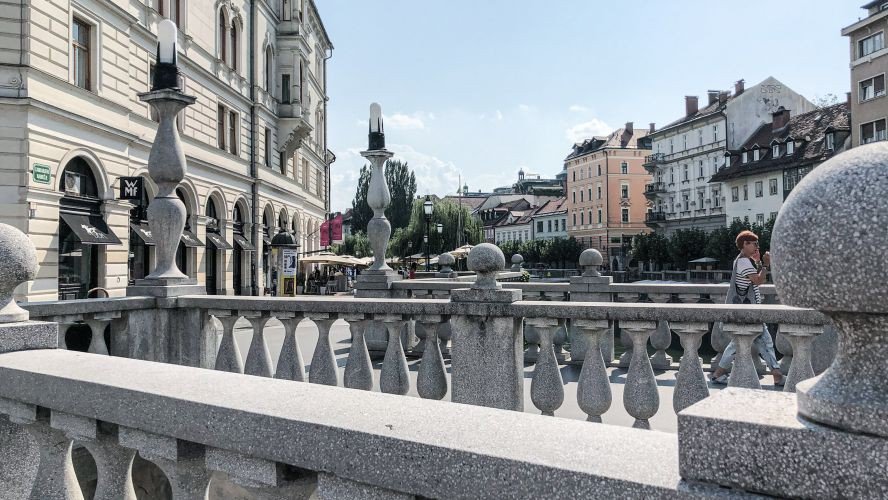 Old Town Square is the focal point in Ljubljana. It is a very picturesque area where you will see the recognizable attractions of the pink Franciscan Church, the Preseren Monument, and the Triple Bridge.

The square started as a road junction in front of the city gates in the 1200s.  The same intersection turned into a square in the middle of the 19th century. It features the statue of France Perseren (1800-1849), one of Slovenia's well-loved romantic poets. 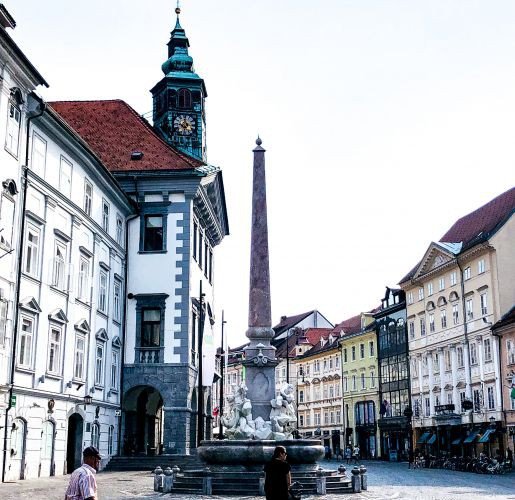 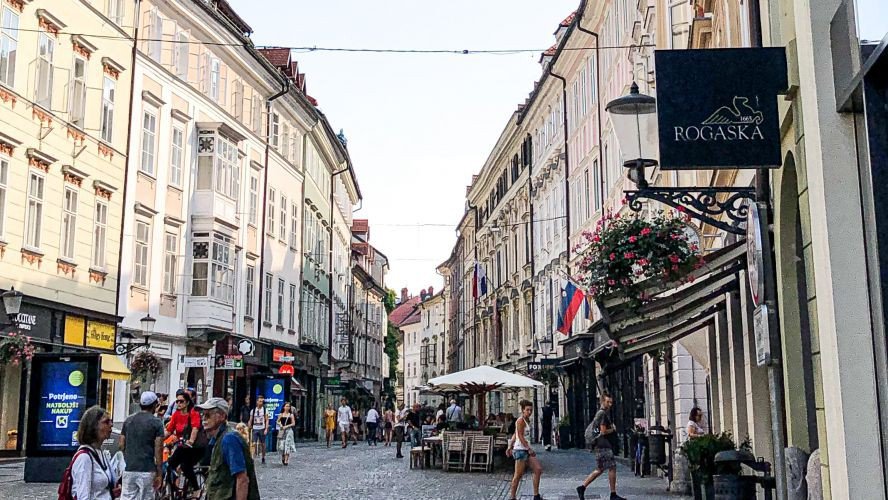 Franciscan Church of the Annunciation

The church is hard to miss with its pink Baroque facade. It is the parish church of Ljubljana. Its color is symbolic of the Franciscan monastic order.  A 1648-1660 construction, the church featured frescoes, which were, unfortunately, damaged by the earthquake of 1895. New murals replaced the previous one in 1936. 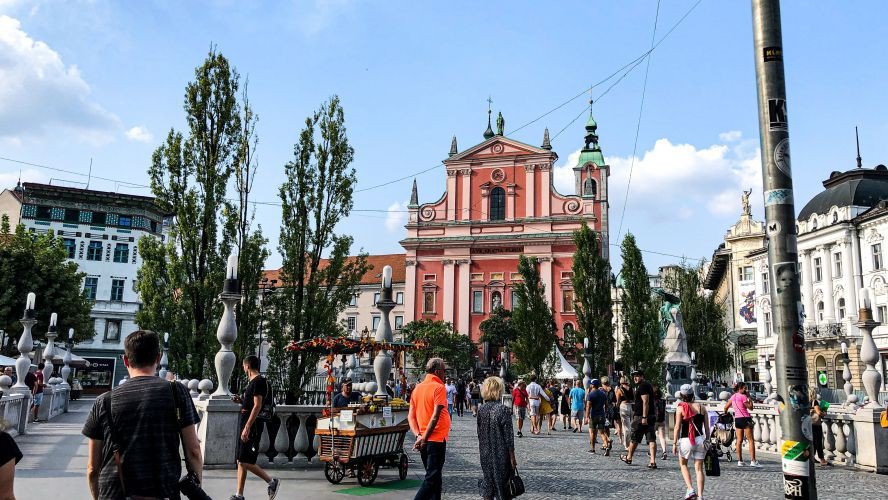 Standing on Castle Hill for about 900 years above the city is Ljubljana Castle. The first castle was a wooden one built around the 11th century. It became and remained a military installation (arsenal, prison) through the early 19th century. The Municipality of Ljubljana purchased the castle in 1905, turning it to a form of public housing.

Later in the 1930s, Joze Plecnik took the remains of the castle and re-designed it.  In the 1990s, it became event space and restaurants. A funicular was built in 2006 to serve the facility. 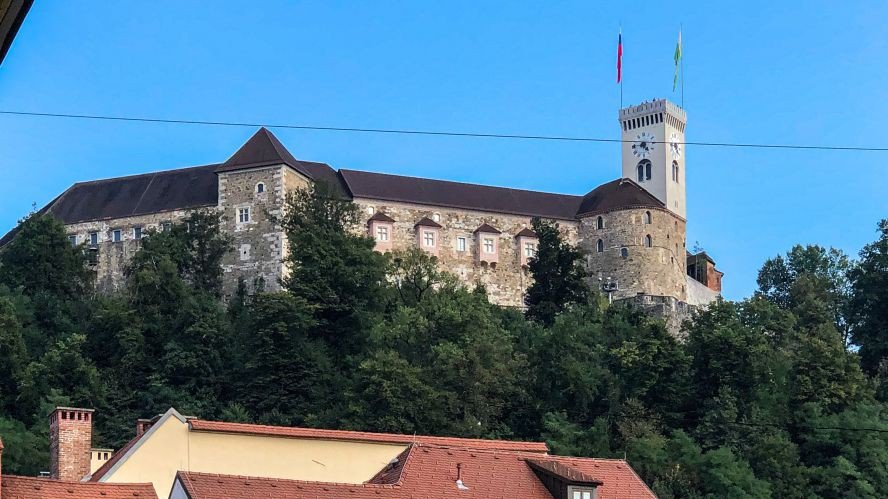 St. Nicholas Cathedral is the Cathedral of Ljubljana. It is an 18th-century Baroque church with a dome and twin towers. The site of the Cathedral goes back to 1262 as a site of a Romanic church. The churches burnt down twice and finally rebuilt as a Baroque church in the 1700s. The domes became a feature in 1842. 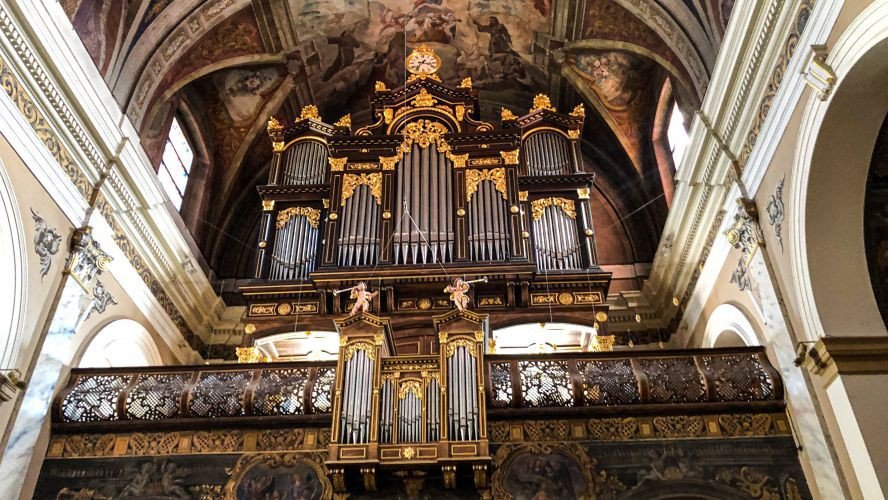 Inside the Ljubljana Cathedral

Lake Bled is one of the most beautiful lakes and sights you will ever see. Imagine cobalt blue waters with a tear-drop islet in the middle of the lake. You will also see a medieval castle, Bled Castle, perched on top of a high natural cliff. You can ride the traditional pletna boats to the island to see a museum, and the Baroque Church of the Assumption and make a wish at the wishing well in the 15th-century belfry tower.

Today, Lake Bled is a holiday resort with private accommodations, campsites, and restaurants. Thermal waters used for patients going back to the 19th century still exist in the Toplice Hotel's current site. 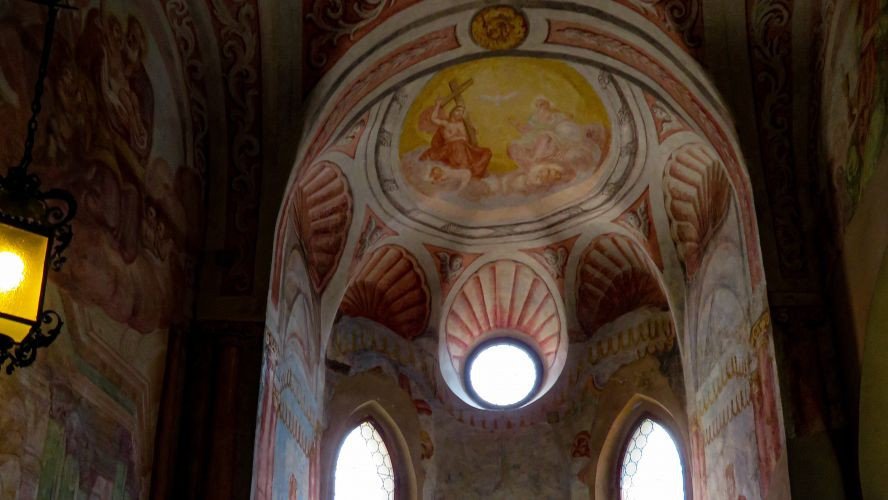 Church of the Assumption on Lake Bled Island 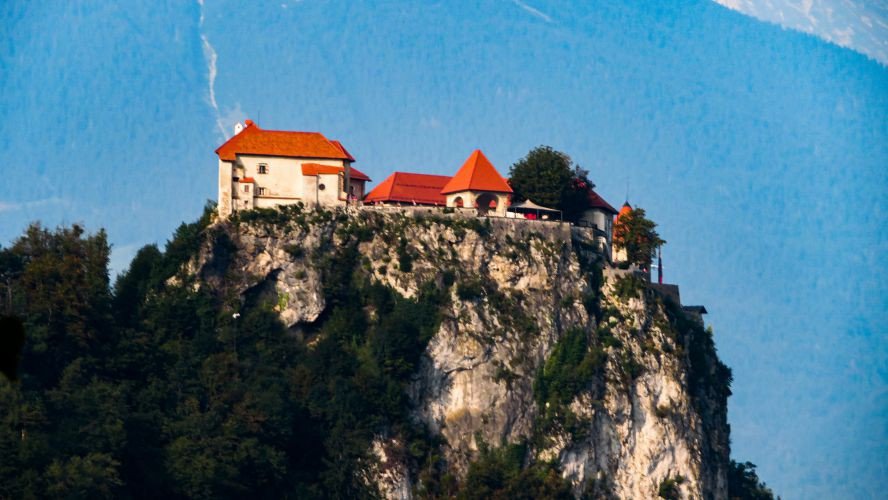 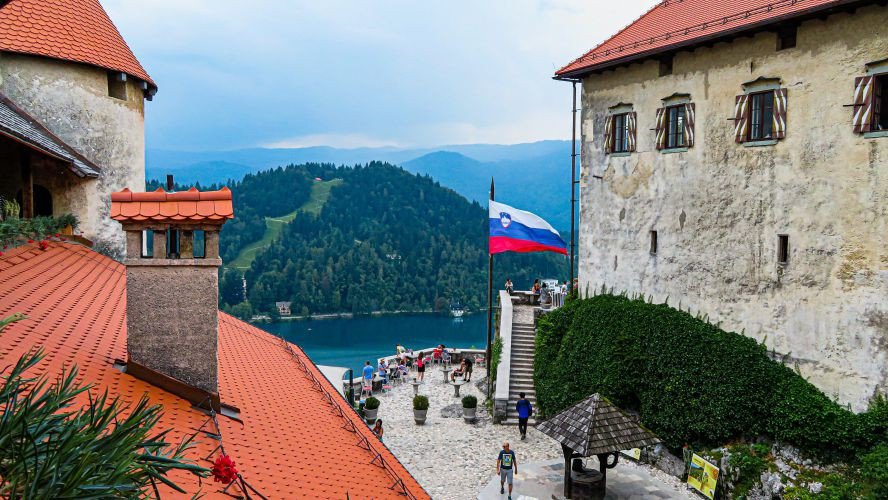 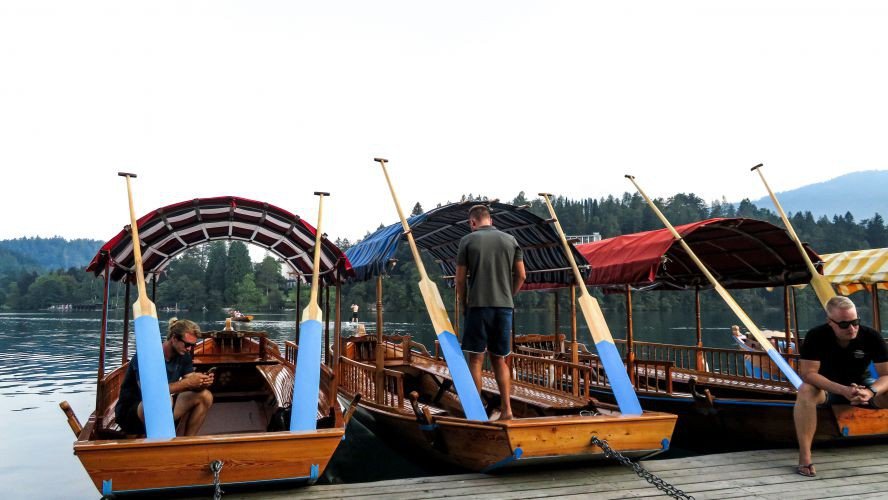 About an hour outside of Ljubljana is the town of Postojna, where you will see the most profound and most significant cave system in all of Europe.  An early tourist attraction going back to the 1800s, the Skocjan and Postojna Caves are now World Heritage Sites.

The Postojna Cave is a horizontal cave that made it possible to build an underground train system.  On the original 1872 tracks were two carriages, carrying four passengers pulled by tour guides around the cave.

Today, the battery-operated underground trains take tourists two miles into the deep cavern on a circular track.
In the cave, you can view the endangered Proteus anguinus or a salamander known as the human fish because of its pinkish color. 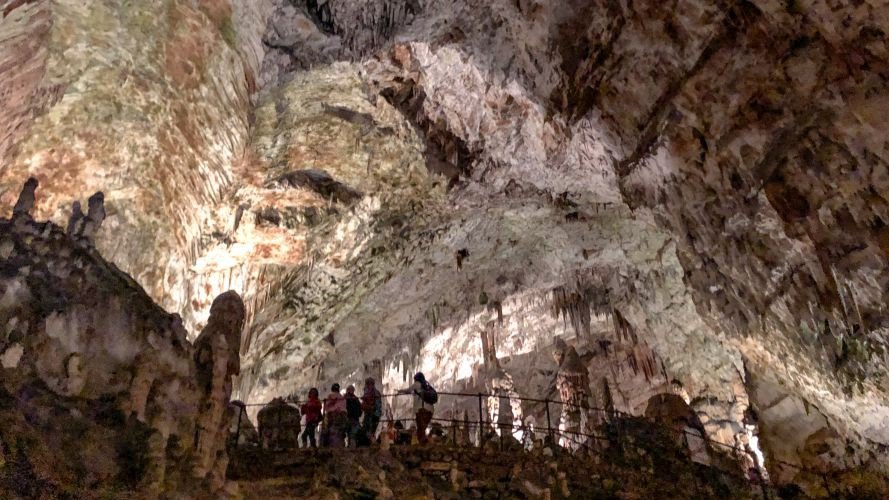 Postojna Cave is Largest Underground Passage and Cave in Europe

The Predjama Castle is a fascinating cave castle perched on the side of a 400-foot precipice. Lord of the castle was Erasmus of Lueg, who, in the 15th century, had a reputation of being a robber baron (stole from the Habsburg). He was e caught after a long siege after being betrayed by one of his subjects.

The current castle is the 1570 Renaissance version after being rebuilt twice due to fire and earthquake. It has remained in this form up to the present day.  After WWII, it became the property of the Yugoslavia Communist party, nationalized and turned into a museum. 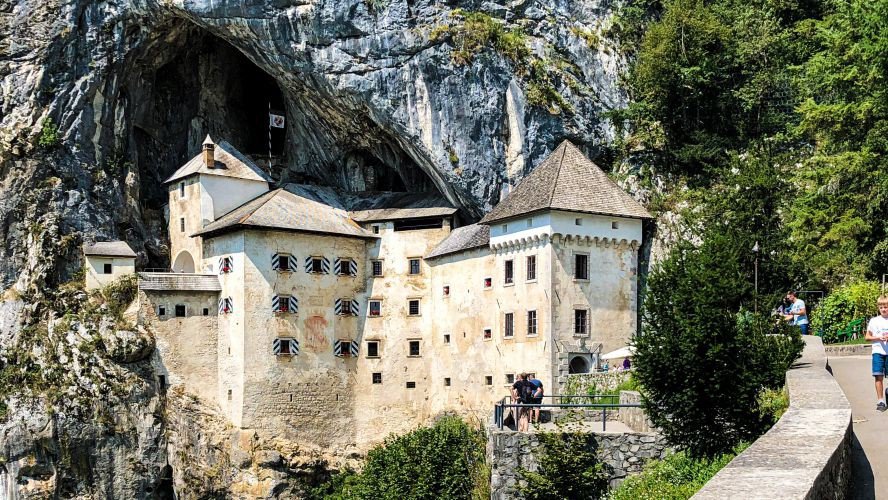 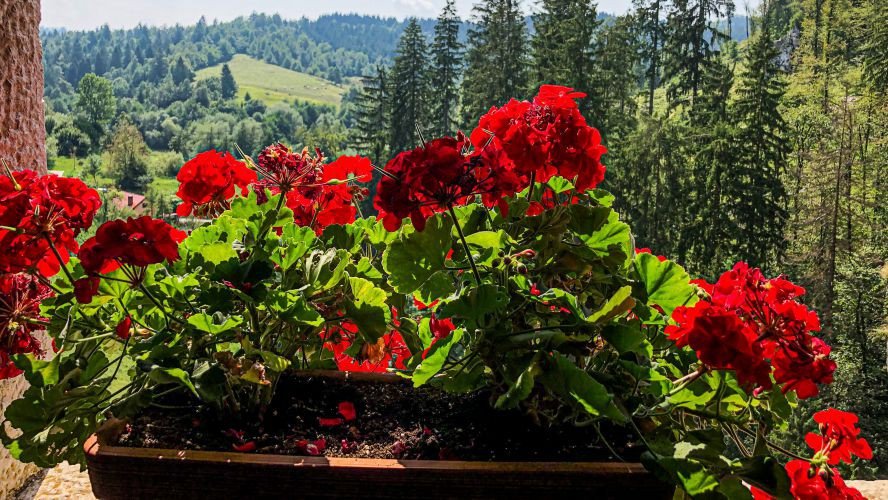