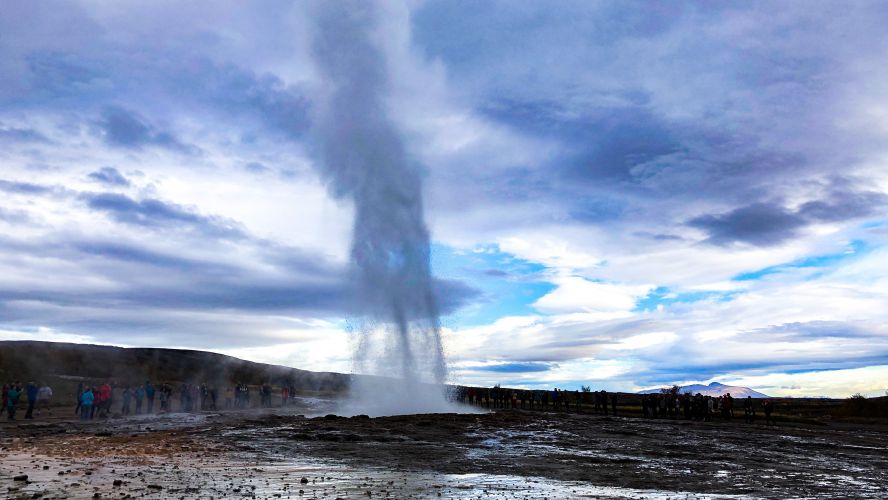 Of the 55 countries I have visited, Iceland is in the top tier of countries that is a must-see. Iceland is geography and geology, with volcanoes, glaciers, geysers, and waterfalls and the most rugged of landscapes that are incomparable and unforgettable. If you had been traveling in Europe for a while, Iceland would be a change of scenery. No lavish mansions and museums are brimming with chefs oeuvres. It's an Arctic Circle island that's second to none. 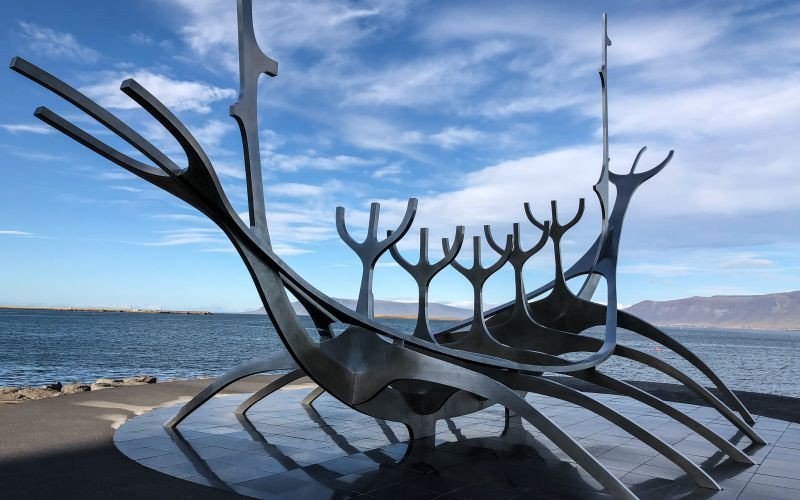 If you want to know how far up it is? Iceland is east of Greenland, and immediately south of the Arctic Circle. It's west of Norway, separated by the Norwegian Sea. The Atlantic Ocean borders its south and west, where Scotland is about 800 flying miles.

It's a young country that was uninhabited at a time the rest of Western Europe was emerging. This western-most European country is sparsely populated. Most live in Reykjavik on its southwest coast. Most of the land is uncultivable, covered by glaciers, cooled lava, and some 200 volcanoes! 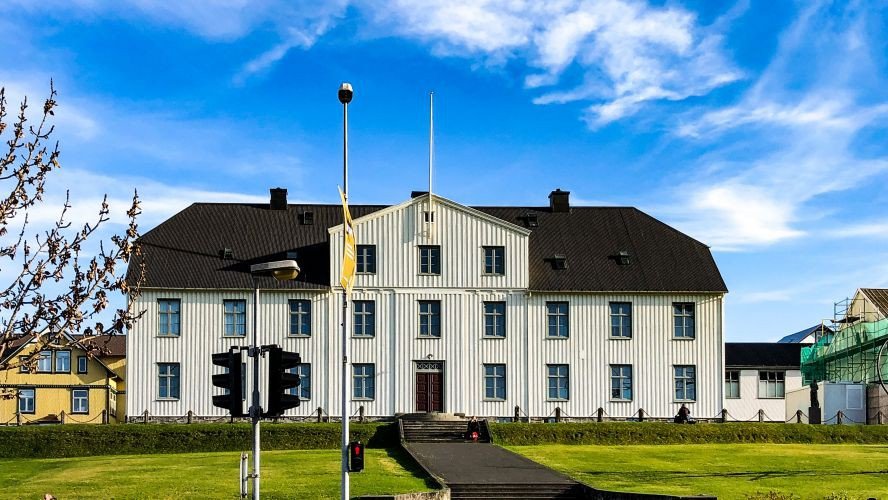 Site of the Reagan and Gorbachev Summit

Iceland is a young and small country. The first settlements appeared in the 9th century AD during the Vikings Age of Exploration. The first documented permanent settler was Ingolfur Arnarson in 871 in Reykjavik or the Bay of Smokes. At the time of Iceland's settlement, the Fall of the Roman Empire had come and gone, and the rest of Western Europe emerged. In these early Icelandic settlements were the oldest documented parliamentary system circa 931 AD. The system was by word of mouth by leaders of a region who would travel to other areas to spread the news or make decisions.

It stayed under Norwegian rule until the 14th century, after which it fell under Denmark. It gained sovereignty as the Kingdom of Iceland after WWI but remained a subject of Denmark until after WWII. It gained independence in 1944. The U.K peacefully invaded Iceland in 1940 to avoid it being taken over by Germany. The U.S then took over the neutral country in 1941.

At the turn of the 20th century, Iceland had a population of 6,000 people. Its population today is about 128,000; Two-thirds live in Reykjavik. The rest of the island is uninhabitable.

Ten-percent of the land is cultivatable, with another 20 percent used for grazing sheep. There are very few trees, but there is an active reforestation program going on. There is a joke in Iceland that asks you, "what do you do when you find yourself lost in Iceland?" The answer, "stand up!" 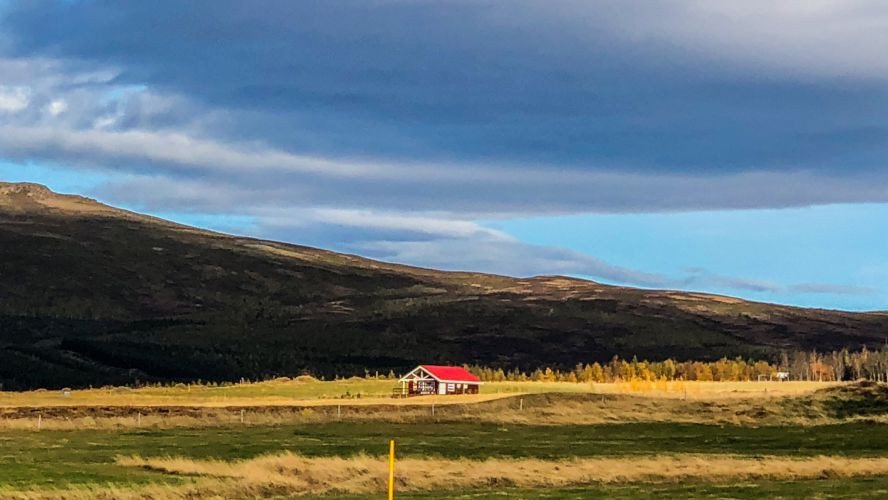 Iceland is geologically active with over 200 volcanoes, 30 of which are active. It is one of the most active volcano regions on the planet, sitting atop the Mid-Atlantic Ridge between the North American Plate and the Eurasian Plate. There is a deep rift valley almost in the middle of the ridge running its full length. Eruptions and lava flow reach the seafloor forming crusted material and islands along the seam. Since 1500, one-third of the Earth's lave comes from the volcanoes in Iceland.

Helka is its best-known volcano, which erupted four times in the 20th century, including smaller eruptions in this century. Underground explosions have created islands like Surtsey, which added an area of one square mile and 950 feet mountain.

About 11% of the land is covered by glaciers, which is a reminder of its proximity to the Arctic Circle. Iceland has almost 300 named glaciers of all types. The largest one is Vatnajokull (Vatna Glacier), with an area of 3000 square miles, the most extensive on the European continent.

It has many geysers. The word geyser came from the Icelandic name, "Geysir." I've never seen a country where you will find many geysers, boreholes, or volcano vents.

It has around 600 hot springs, 20+ high-temperature steam fields spouting 300 degrees steam. Iceland takes this geothermal energy to heat everything from homes to swimming pools. Glacier rivers and waterfalls add hydroelectric power. Both provide up to 90% of Iceland's power needs. 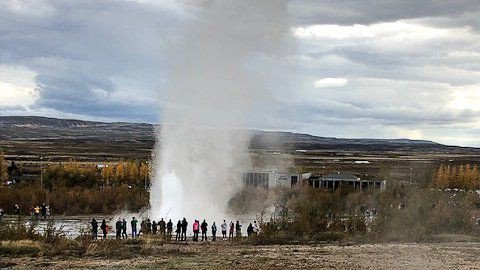 We were on the last leg of our year in Europe before returning to Atlanta. For that last month, we were visiting family in London, and we were meeting in-laws in Edinburgh, Scotland.

By early September, airfares on Icelandair were entering the offseason so that we could purchase some reasonable airfares. Forget checking any other airlines. Icelandair will be the cheapest. Icelandair flies from many secondary cities (including the U.S) to Europe with a stopover in Reykjavik for up to four days at no extra fee.

Unfortunately, airfare will be the cheapest thing on this trip. As soon as you get off the plane, you will need that credit card, so keep it close by.

Transportation will be extraordinarily expensive. Keflavik Airport is an hour outside of the city, and there are no cheap transportation options. Taxis or car rental cost the (Icelandic Krona) equivalent of several hundred euros per use or per day. We opted for the bus service, which meant a shuttle to the airport bus terminal, the bus to the downtown terminal, and a walk or another bus to your hotel/destination. The bus trip takes about three hours.

At the time, we paid the equivalent of over $100 per person. On the return trip, we took a roughly $300 taxi ride to the airport since we had an early flight, and we did not want to take a chance of a late or canceled public bus.

Lodging is also expensive, especially for three of us. We stayed at a one-bedroom apartment with a sofa-bed downtown, next to the city hall. It was comfortable, clean, with a grocery store within walking distance. The apartment cost close to $400 per day.

The food was excellent in Reykjavik. I'm not so sure what a traditional Icelandic dish is, except that you will find fish or lamb dishes served on skillets mixed with all sorts of vegetables. You will find a variety of restaurants downtown, including a ramen noodle house with less than ten seats. There is a couple of hot dog places downtown, including a kiosk named Pylsuhusdio, for cheap meals. My daughter and I thought the hot dogs were excellent, which we took with no garnishes. My husband did not like his hot dog, which was fried and that the "fixings" were not edible.

In one restaurant, we saw a puffin dish on the menu, which we could not imagine trying. We did not see any puffins on our tours, and we were told they disappear in August. 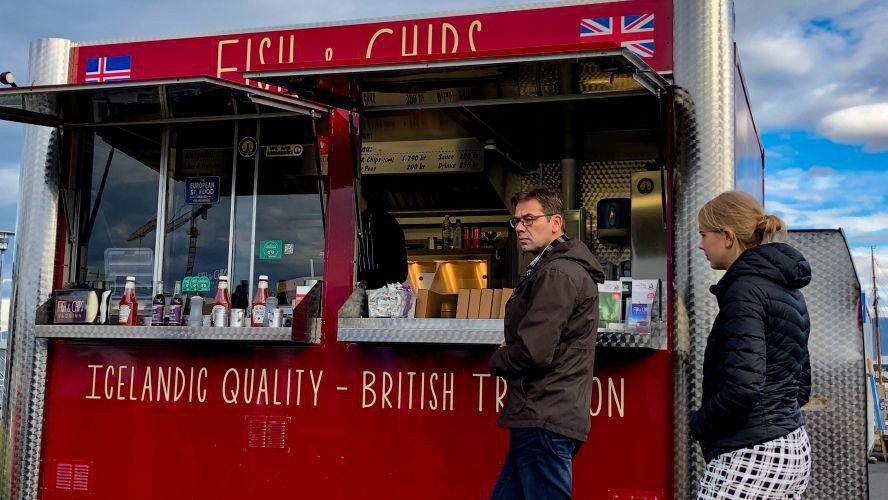 The Best Fish and Chips

Tourism is a top revenue generator for Iceland, second only to geothermal and hydroelectric power. The best tour for first-time visitors is the Golden Circle and the South Coast Tours, which are both day trips from Reykjavik. We did not have time for the South Coast tour, which is a more extended tour. The Golden Circle tour, from Reykjavik and back, was perfect for us. You will see our fabulous pictures on that tour!

Alas, the northern lights were not in the cards for us this trip. It was not the right season, so the probability of seeing it was low. My husband did not want to spend a sleepless night aimlessly chasing nothing. Instead, we did a whale watching tour, which I do not recommend. The views were beautiful but it was freezing. The probability of seeing a whale (nor puffins) was the same as seeing the northern lights. We did a Hop On Hop Off tour of Reykjavik, which allowed us to see more of the harbor and several museums.  Blue Lagoon spa tour is also popular, but we did not take the tour. It is a convenient tour because it is closer to the airport. Visitors can take a quick side trip to Blue Lagoon on the way to or from the airport. 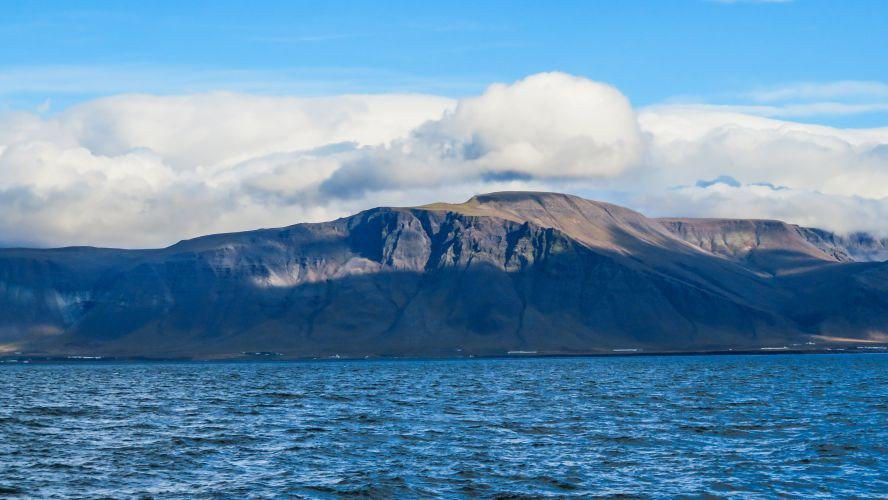 Reykjavik Downtown is quite small, so you will have no problem walking around, shopping for tees, or volcanic salt. Wool sweaters are popular, but Icelandic fleece is different. The sheep is a direct descendant of sheep brought to Iceland by early Vikings in the 9th and 10th centuries, so no other breed can be imported into the country. The fleece has an inner and other coat, which makes it very warm, perhaps too warm for any weather in the U.S.

The most iconic monument downtown is the Hallgrimskirkja, which you can see everywhere you go. It is named after an Icelandic poet, Hallgrimur. 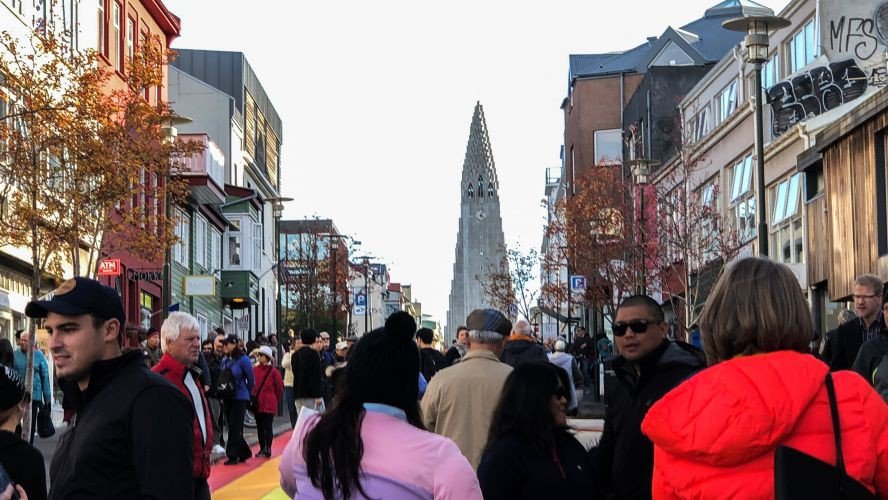 It is Named After an Icelandic Poet with the Same Name. Architect was Gudjon Samuelsson.

The Old Harbor is a favorite destination downtown, especially when taking boat cruises, like whale watching. There are shops, restaurants, and museums (Maritime Museum). The best thing we found there were fish and chips kiosks. The fish was very fresh and very tasty. 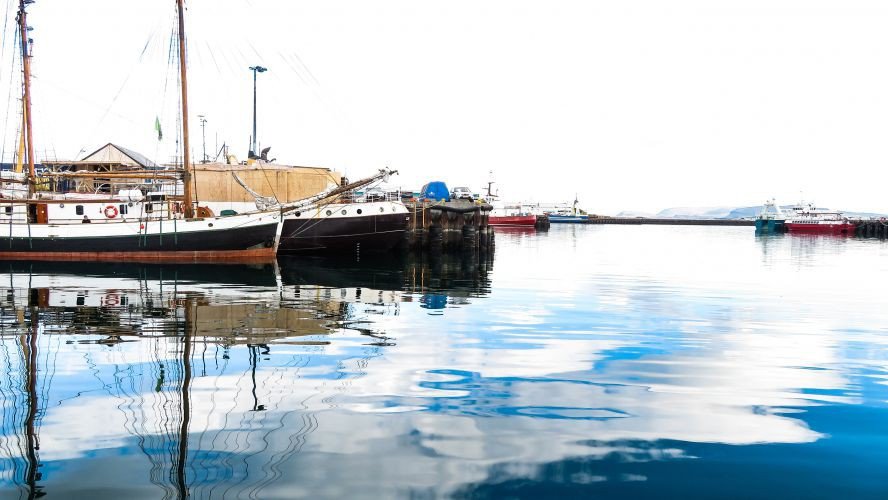 The Old Harbor for Whale Watching Boats, Galleries and Shops and the Best Fish and Chips

The Pond will be a favorite spot downtown next to City Hall. It is a recognizable meeting point for tours or transportation. The Pond is famous for watching the swans, enjoying the view and walking the park. The lake freezes in the winter so, ice-skating anyone? 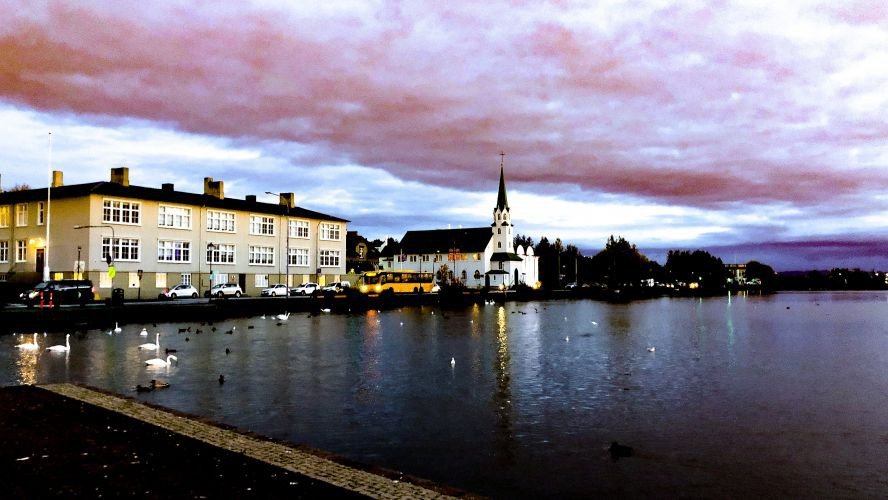 In the Middle of Reykjavik to Feed the Birds, Enjoy the Views, and Winter Skating

The Solfarid Sculture (see above) is a must-see sculpture as you walk along the harbor. The Sun Voyager is a sculpture by Jon Gunnar Arnason, an ode to the sun and Iceland's Viking past. You will like two other buildings, one shown above and one below: the Harpa and Hofdi House. The Harpa is Iceland's Opera House, located on the harbor. The Hofdi House is a 1909 building that was the 1986 historic meeting between Ronald Reagan and Mikhail Gorbachov that ended the Soviet Union. 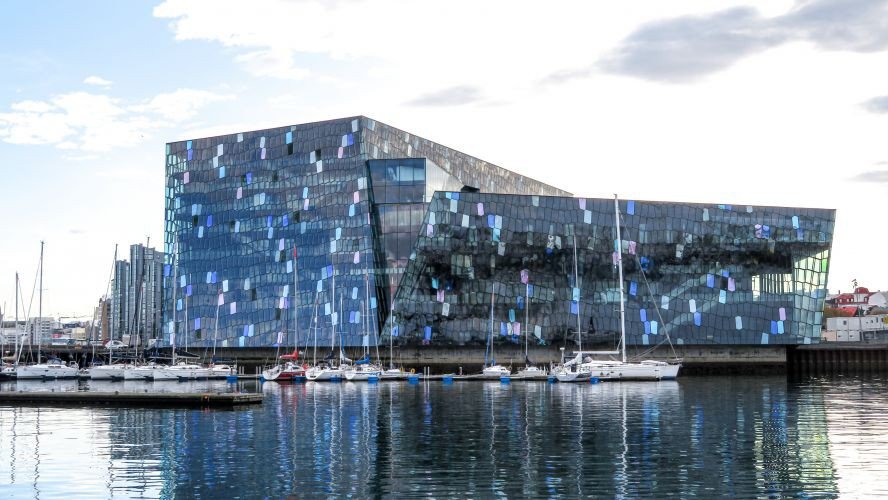 Harpa Looks Out Over the ReykjaviK Harbor

A phenomenal sight is the Gullfoss Waterfalls. You can take a stair that follows the waterfall from one end to the other. It's Iceland's most famous waterfall. It is on the Hvitia River which is fed by the Langjokull Glacier 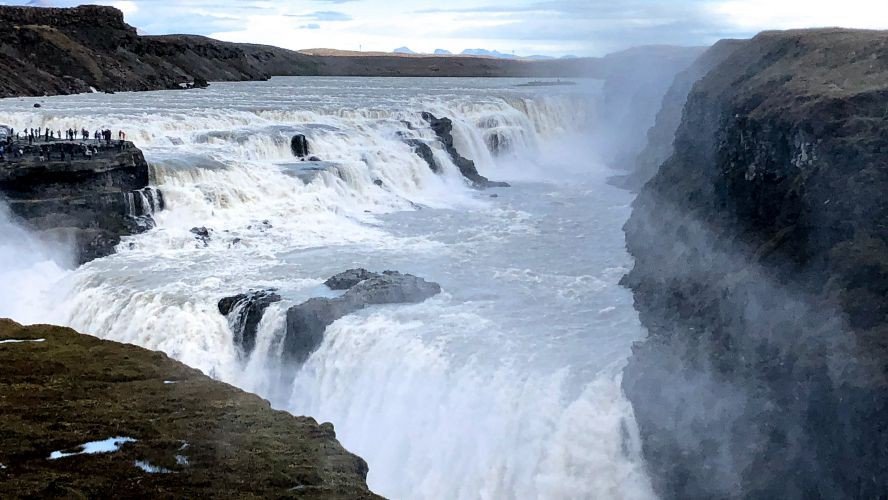 Waterfall on the Hvita River or White River 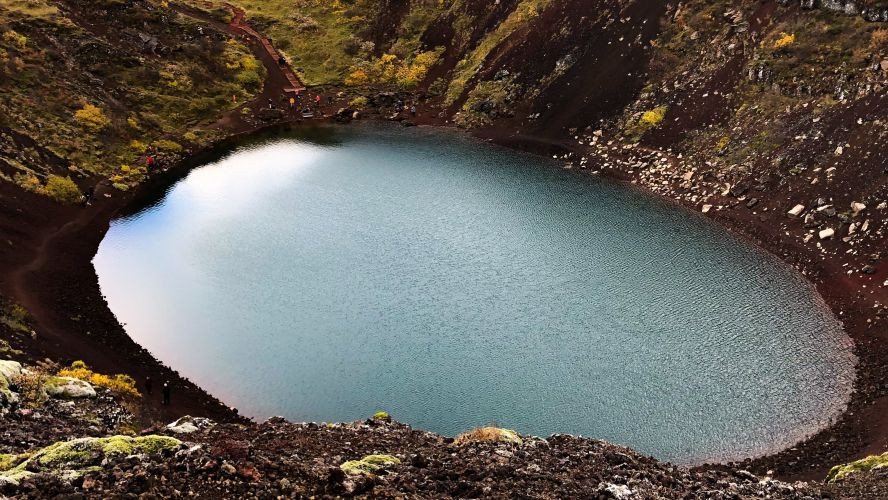 Thingvellir National Park is surrounded by Iceland's largest natural lake, Thingvellir. There are so many sights and views to experience. You will see volcanic lakes, waterfalls, and rivers, walk Rift Valley on the Mid-Atlantic Ridge. 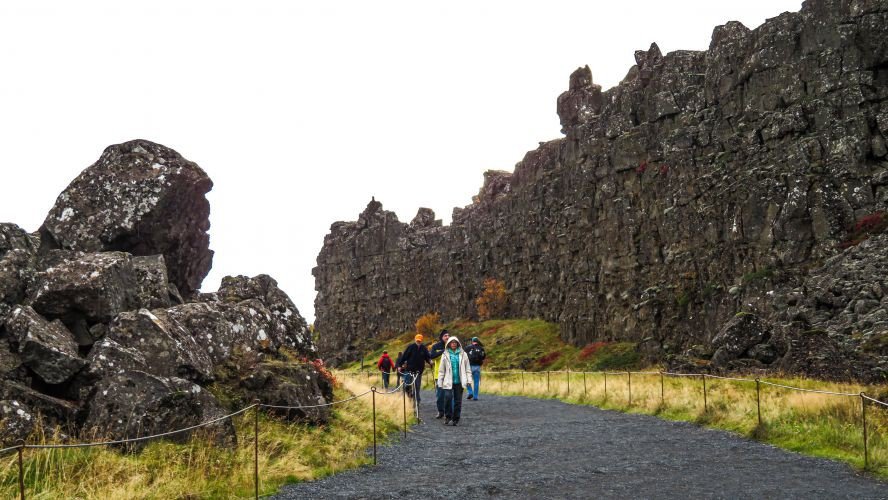 Walking the Rift in the Mid-Atlantic Ridge 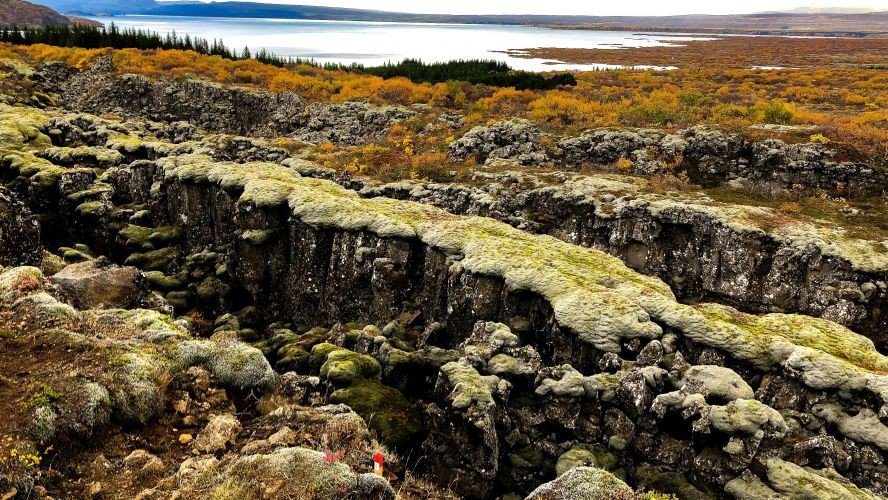 Rift Valley over the Mid-Atlantic Ridge 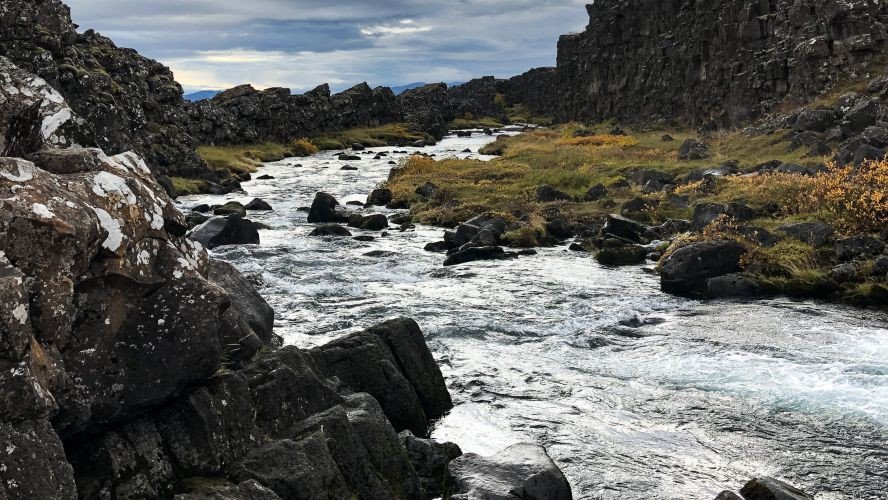 Haukadalur Geothermal and Geyser (above) Area is an unbelievable tour. Haukadalur is one of several areas of hot springs, geysers, and volcanic vents in Iceland. 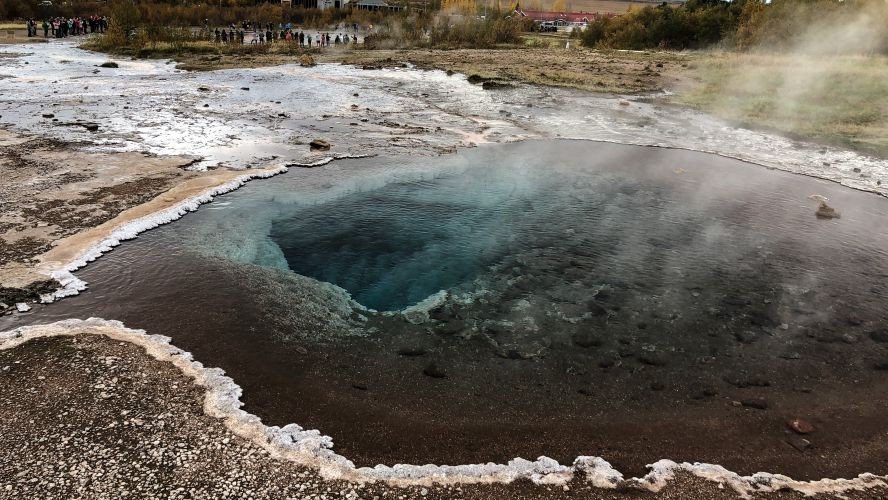 And finally, I leave you with a photo of the Icelandic horse.  It is a small horse, sometimes pony-sized, bred in Iceland. It is sturdy and long-lived/

I know we left Iceland in a rush, knowing we had to make a return trip. We only scratched the surface, and there was more of that beautiful, rugged land to discover. Next trip, we will stay as long as necessary to find and photograph the northern lights! 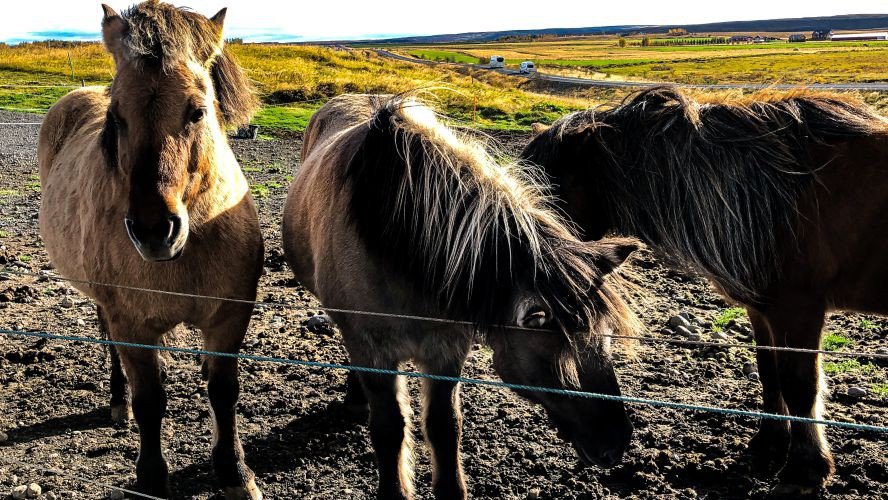 Feeling at Home in Ireland
Ljubljana, Slovenia, The Best Place You Never Knew...