Four Friends and a King in Bhutan 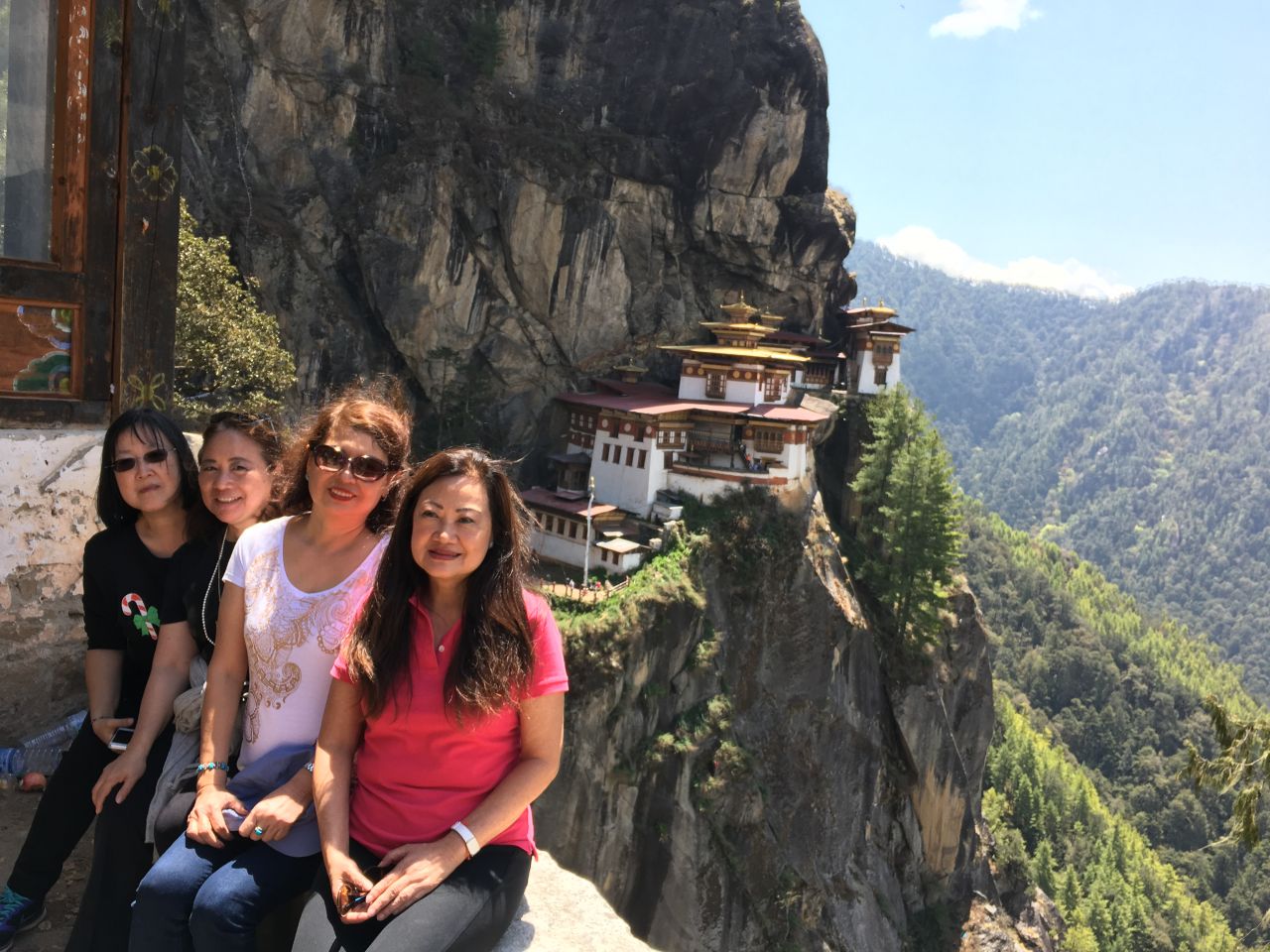 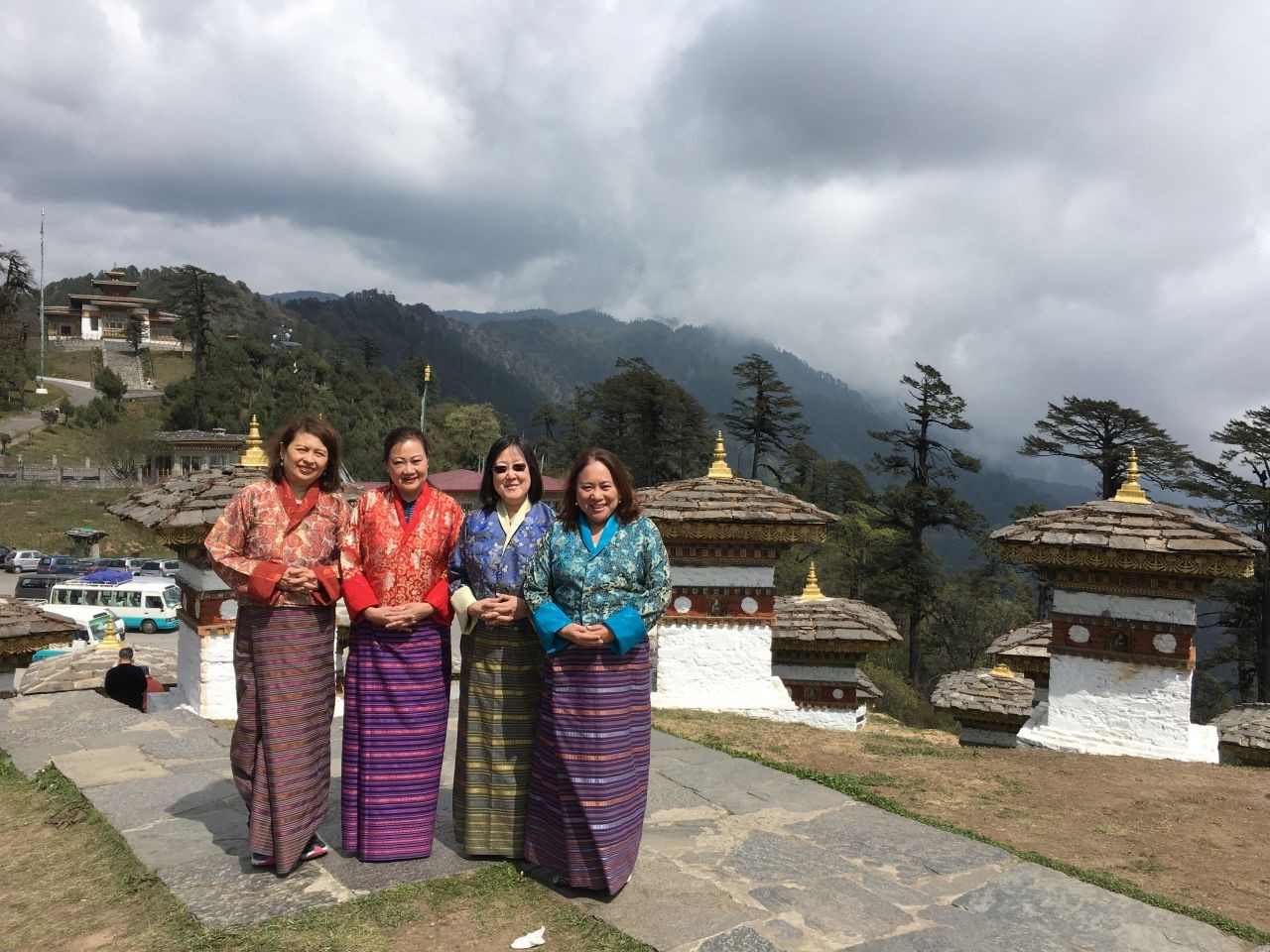 The world of royalty is one I only read about in books and magazines, or see on television and movies. Meeting a royal figure, therefore is an experience I can only dream of and imagine. My closest encounter with anything royal is visiting beautiful castles abroad, mostly in Europe and a few in Asia, where at least I had a glimpse of how royalty lived. During these trips, never had I seen any real king, queen, prince or princess. That is, not until I went to Bhutan recently with my good friends Lolet, Marge and Bebeng, who were my former classmates in graduate school and are now my occasional travel buddies.

Upon landing at the Paro International Airport, our pretty tour guide Kuen picked us up and brought us to nearby Thimphu, the capital of Bhutan, where we were to stay for the next two nights. Before checking in at our hotel, we first had lunch and made the rounds of tourist spots such as an old bridge, the Buddha Point and the National Memorial Chorten. This latter attraction, also known as a stupa, is a prominent Buddhist structure with golden spires and bells and is the focus of daily worship of many Bhutanese. Among other things, Kuen narrated that Bhutan is a kingdom ruled by King Jigme Khesar Namgyel Wangchuck who is only 37 years old and is married to Queen Jetsun Pema who is ten years younger than him. They were both educated in London, England, and have a one year old son. Lolet then jokingly said that we wanted to see the king.

On our way to the hotel after our tour, our van passed by the chorten which we visited earlier in the afternoon. Then all of a sudden, Kheun exclaimed that she just saw the king in the chorten. Hoping we could take some pictures of the king, we asked our driver to park our van on the street across the chorten. Marge was able to take one picture on her IPad but it wasn't so clear as the subject was quite far from us. Then one of the king's security guards approached our van and said we were not allowed to take pictures of the king. And so the king went inside the building and we just thought of waiting it out in the van so we could steal another shot of the king.

After about five minutes of waiting, we decided to go down and enter the grounds of the chorten to at least get a better view of the king. And then, we again saw King Jigme garbed in the traditional Bhutanese attire for men called "gho" with a yellow sash signifying his stature. He was going around, stopping to talk to each group of tourists. And then it was our turn! He asked us where we were from and we proudly replied that we were from the Philippines. He thanked us for visiting his country and explained the reason for the renovation being done in the site. He told us that this was in preparation for their flower festival in June. During our three minute conversation wherein we were just a foot away from him, we noticed that he was so handsome and charming and spoke in fluent English.

The four of us were so thrilled afterwards and began texting our family and friends on viber about this incident. Bebeng, the most excited among us, even repeated this story to several Bhutanese we casually met during our trip. We had no pictures to prove that this brief royal encounter ever happened but this episode will forever be etched in our hearts and in our minds. Meeting royalty became a reality for four friends in Bhutan.

Why Visit New Taipei? It is Everything That is Not...
Visit Cape Town, A Remarkable Experience

Our Four Days in Eclectic but Gritty Barcelona