Dijon, France is More than Just About the Mustard 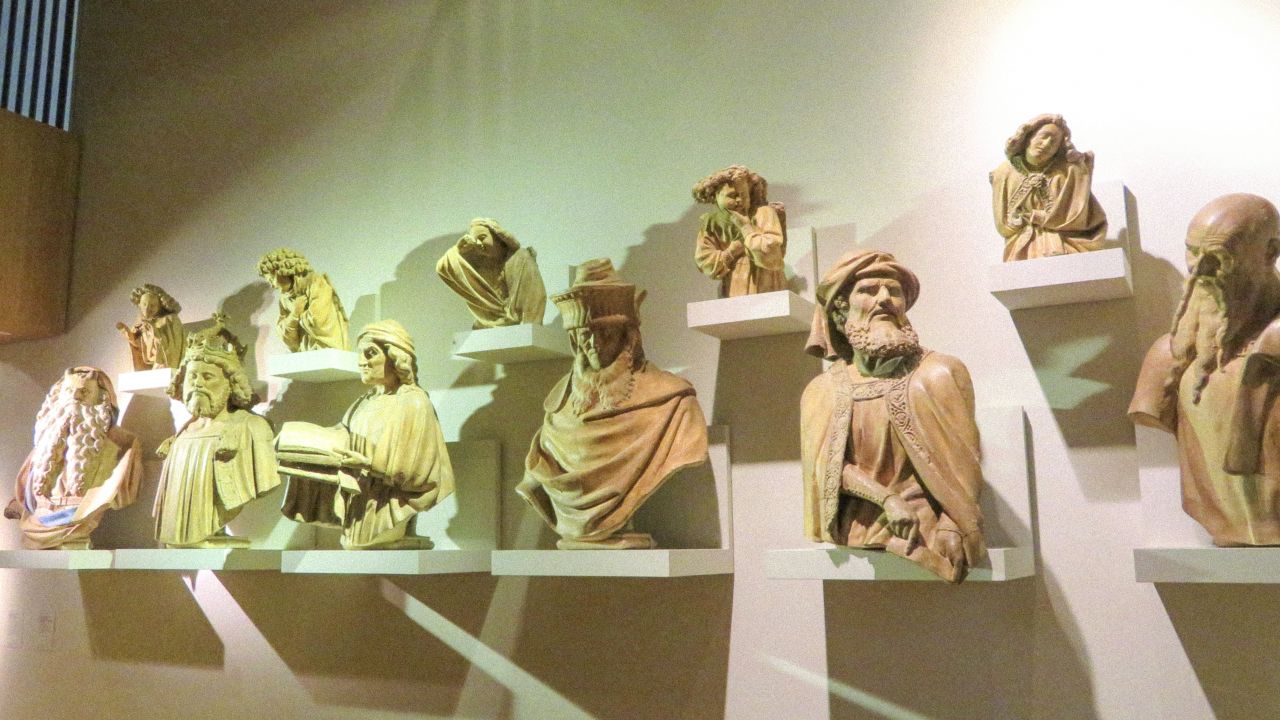 When you tell someone you've been to Dijon in France, the next question predictably, is that the mustard?  Dijon is the historic home of the mustard, but the city is lovely and elegant.  The capital of the Burgundy (Bourgogne) region of France with the fabulous burgundy wines and the Dijonaise cuisine.

I wanted to go to Dijon because it was the hometown of my French teacher, Ghislaine. She had many stories of growing up there, some 93+ years ago. Her uncle, on her mother's side, was a Poupon, of mustard fame, which eventually became Grey Poupon. You will not see the name Grey Poupon anywhere in the city except on a faded sign atop an old building near the train station that says, "the original home of Grey Poupon mustard. 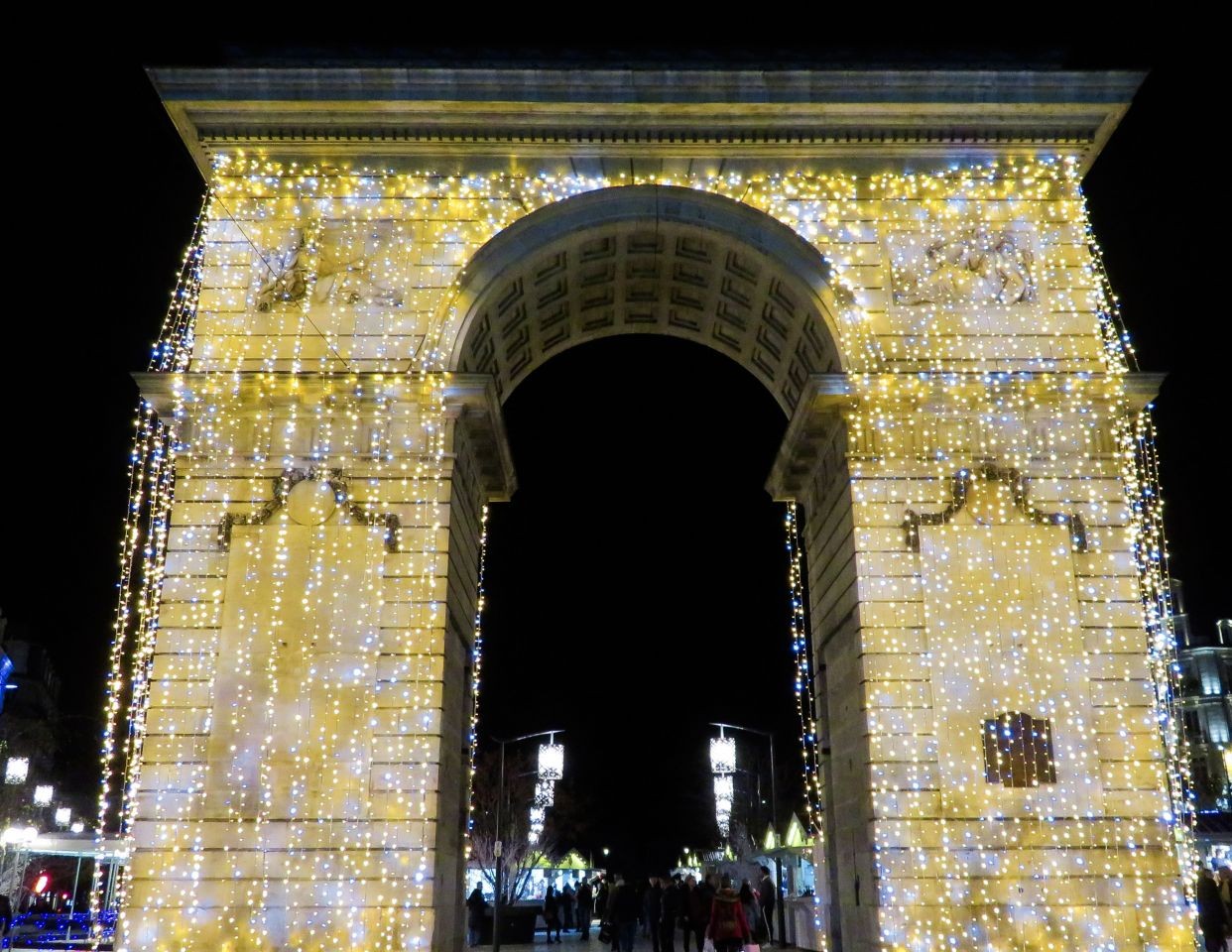 We planned an overnight trip to Dijon, expecting your typical small town with a "Vieux Ville" next to the train station. We had been to Annecy a few weeks ago, and I thought we stayed there one day too long. We knew we completely wrong as soon as we landed in the Gare Dijon. A day and a half were not going to be enough to see the sites in Vieux Dijon, let alone sites outside of the Vieux. For one thing, the Vieux is more extensive than any of the old towns we've seen so far. It is also a bit of a walk from the Gare Dijon where our hotel was. We meandered, trying to figure out the shortest way to the main road.

We finally figured out a shortcut to the main road which meant going back into the train station, go up one level and out. We, at this time, had begun using hotels right at the train station, which made it convenient to drop our bags off before continuing with our day. Forget about taxis. You usually have to call for a cab rather than hail it from the street. Uber may be available in some cities, but it is not as plentiful as it is in the US.
So, the first thing to know when planning your short trip to Dijon is to prepare yourself for a lot of walking. We finally reached the Vieux Dijon at Porte Guillaume or Dijon's version of the Arc de Triomphe. After the long walk, it was time for lunch or a snack and, more importantly, a place to sit. A creperie down the street was just the right place!.

Home of the Mustard

Yes, Dijon is the historical home of the mustard. If you were expecting a lot of fanfare and Disney-ish storefronts, you would be disappointed (or not). I felt a little gauche inquiring about such a mustard place when we were at the tourist office. The tourist officer gave me this little confused French look (which, I have come to see often) and said, a moutarderie? As far as the French are concerned, mustard is a condiment.

Well, there was one store, the Edmond Fallot Moutarderie, that was on the Owl Trail. It was a small shop where you could sample different mustards from mustard pumps. Who knew mustard could be anything but your ballpark variety slop? Pimiento mustard, anyone? They were all quite good, and we bought several small samples for a Euro a bottle. By the way, the other customers in the shop? Other gauche Americans!
Here is a final piece of information about the mustard. It was introduced to the French monks by the Romans (and the Greeks before them) in the 9th century. Pope John XXII of Avignon loved the mustard so much that he created a position of grand mustard master of the Pope. He gave the title and post to his nephew, who happened to live in Dijon. This event occurred in the 14th century, and since then, Dijon became the mustard capital of Europe. Mustard-making became so crucial that Dijon moutardieres were given exclusive rights to the product in the 17th century.

Commercialization of the mustard started in the mid 19th century with the merger of the companies of the British, Maurice Grey, and the French, Antoine Poupon, to create Grey Poupon. It eventually became more British than French. Today, the US, Canada, and the UK are the most significant users of mustard. In France, the mustard exists with such a variety of tastes that you will not know how to use them. I even saw some homemade mustards, at our local marché, mixed with fruits and truffles. I loved it when the vendor pointed to a stack of mustards that he said; he made out of an original 14th-century recipe. 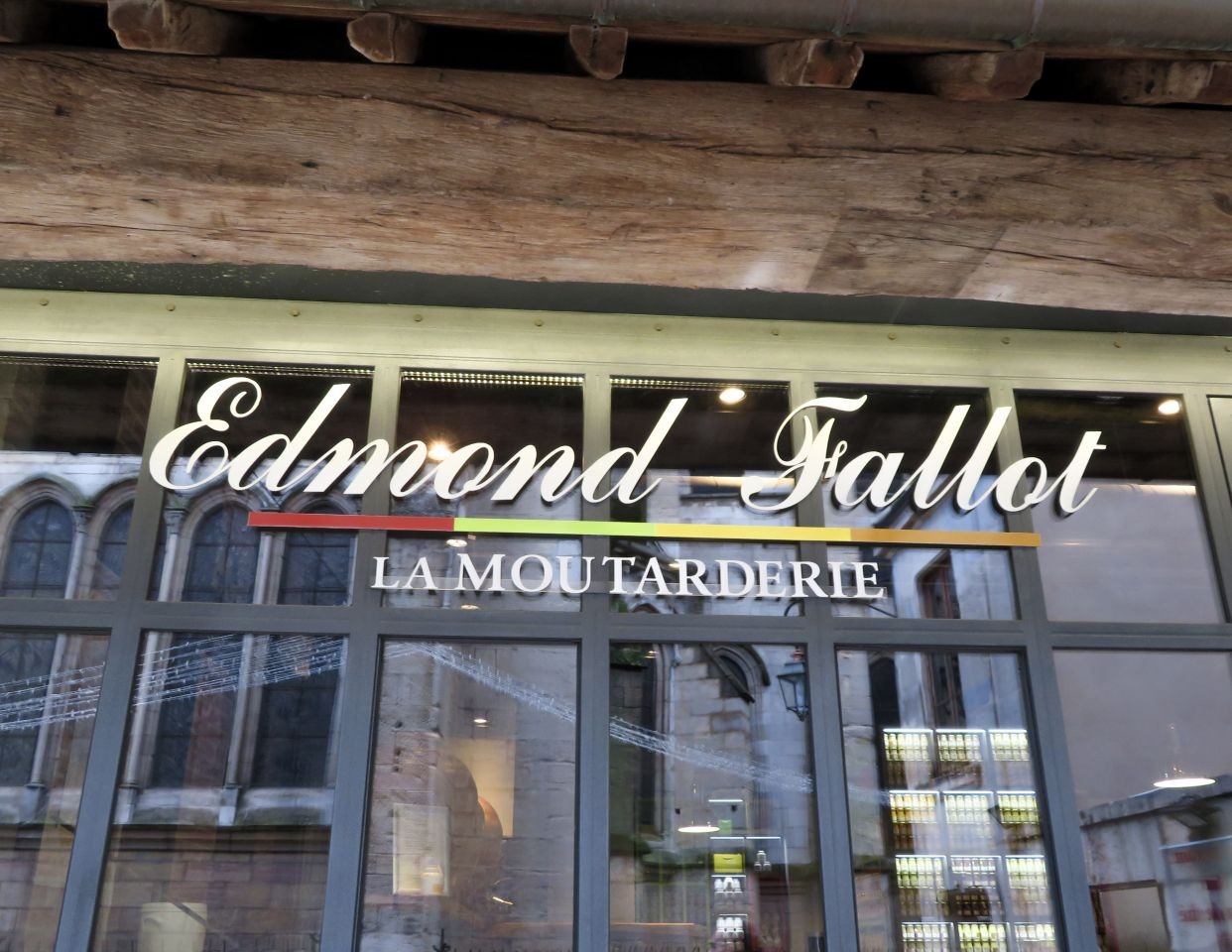 Bourgogne to the French, Burgundy to You

The third thing to know about Dijon is that it is in the heart of the Burgundy region. Burgundy, together with the Rhone-Auvergne (Lyon) valley and the Alps regions, form the central valley, which is the undisputed wine and breadbasket of France. In this region, there is nothing more important than food and wine.

Burgundy has five winemaking regions that produce a variety of wines, from the lowly regional wines to the most expensive Grand Cru wines. The best wines come from an area called the Cote d'Or (Gold Coast), which is a strip of land on the west side of the Saone River, south of Dijon to Beaune. I had planned on a wine tour on the short trip, but we completely misjudged how fast we could get through the Vieux. I've put a visit to Beaune on my tickler. Beaune is a popular destination because of its history and the many wineries. 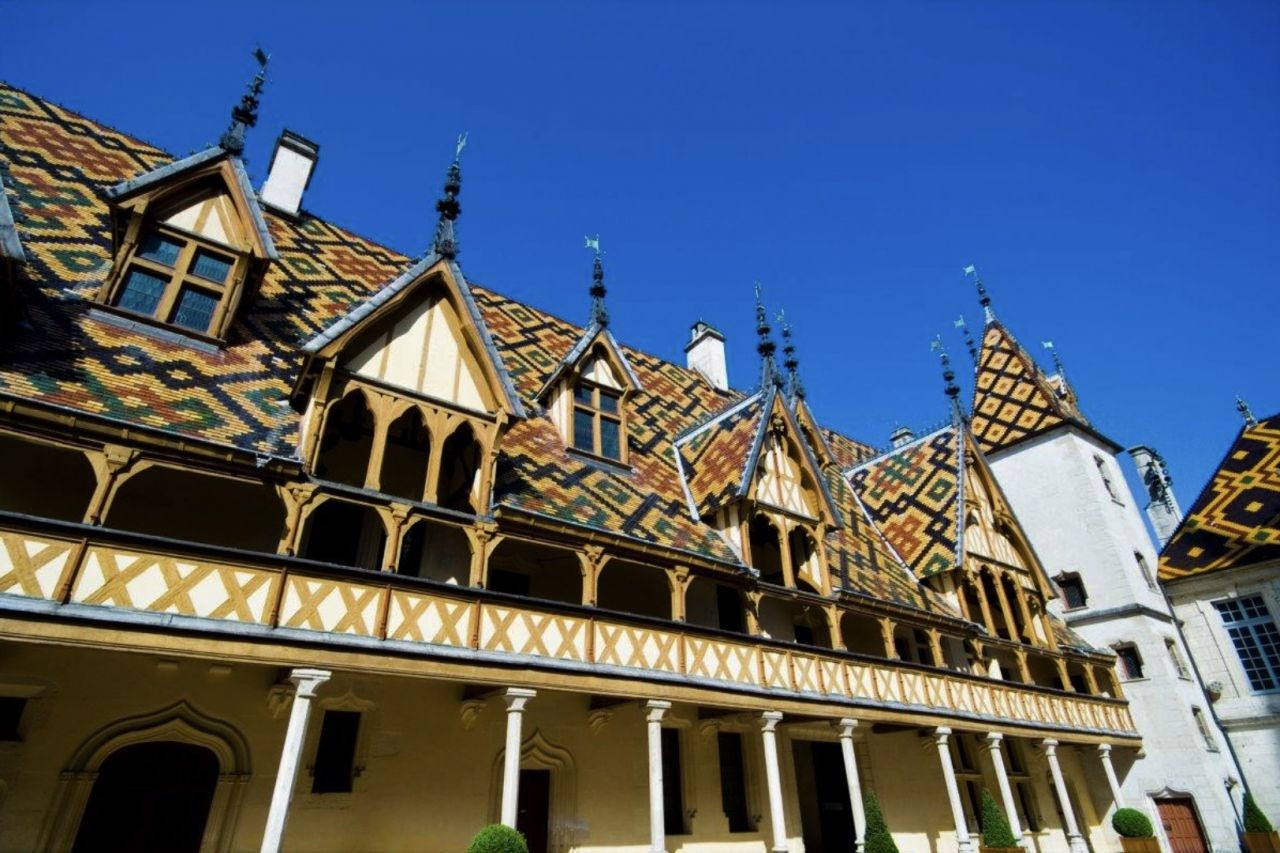 When you get to Dijon, everything will be about the Dukes or Les Ducs de Bourgogne. Historically, the Duchy of Burgundy ruled portions of land west of the Saone River, and Duchy rivaled the French king in wealth and power. It existed from 843 until the French king confiscated it in 1477 due to the lack of a male heir. The Habsburg Dynasty absorbed it through marriage for a short period then surrendered it to France in 1529 in a "royal land swap." Today, the succeeding House of Bourbon is mostly ceremonial. The fortunes of the Dukes are evident, from the expanse of the city, the monuments, churches and museums. 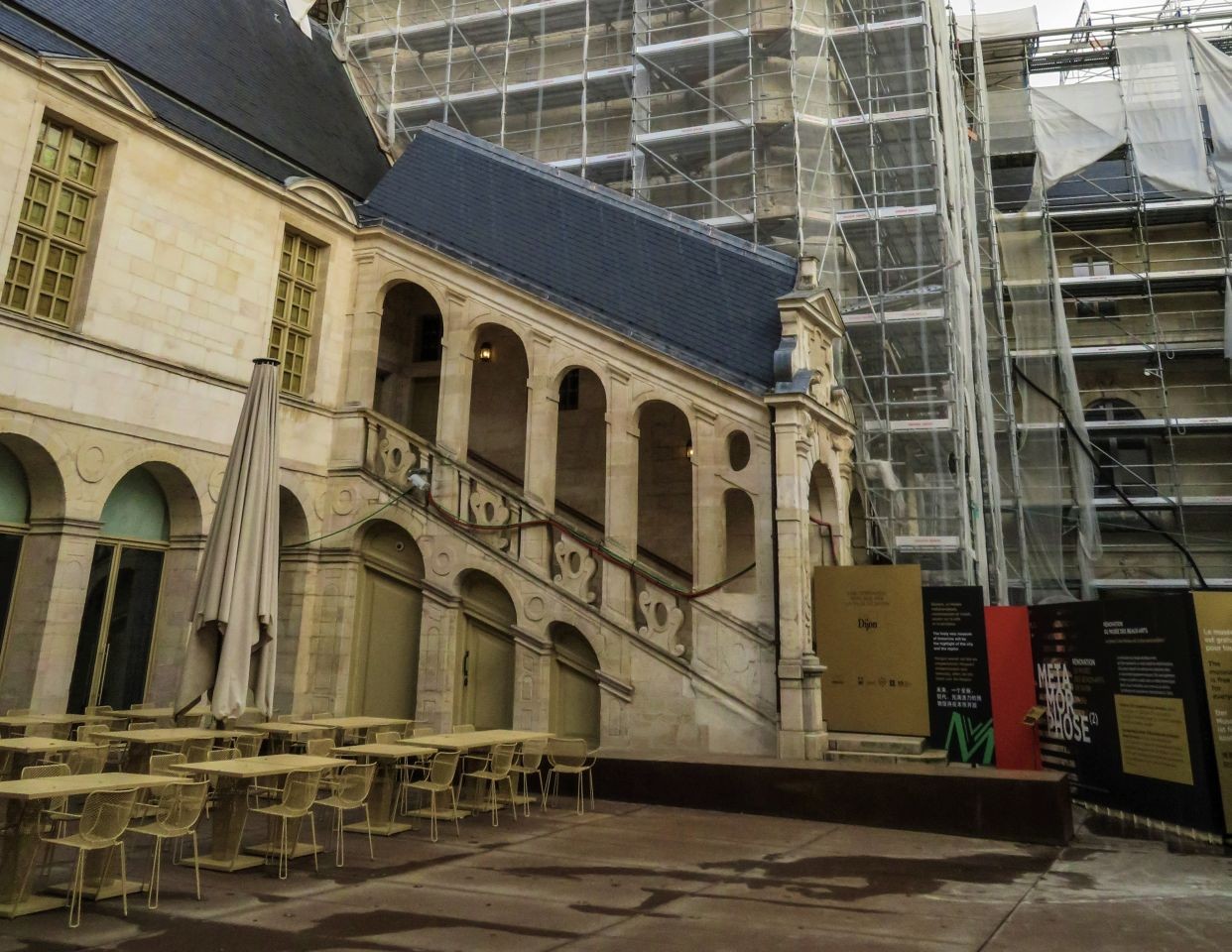 The center of Vieux is the Place de la Liberté. It is designed as a semicircle and anchored on one side by the Palace of the Dukes (Palais des Ducs), and restaurants and shops on the other. This 17th-century semi-circular structure was destroyed, rebuilt and upgraded over the years. Three fountains were added to the plaza in its most recent facelift in 2005. It was restricted to pedestrian traffic at that time, making it the most popular public space in Dijon. At the time of our visit, the City was completing holiday decorations of a beautiful Christmas tree and a carousel for children. 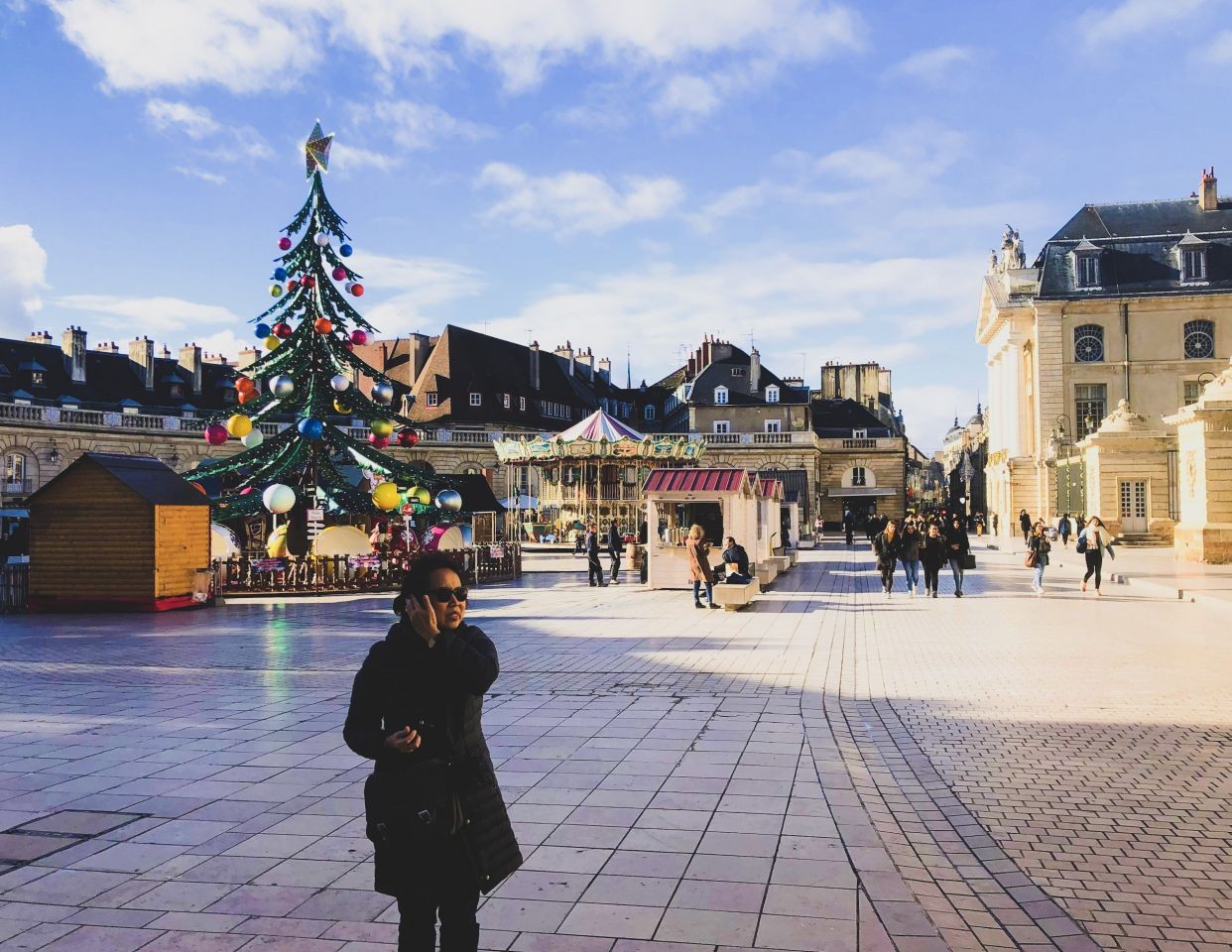 The Palais des Ducs is a magnificent building. The original structure was built during Gallo-Roman times, reconstructed in the 14th century and then again in the 17th century by famous Versailles French architects, Mansart and Gabriel. Since the late 1700s, it has been home to the Musée des Beaux-Arts. It is undergoing renovation since 2013, but it remains open to the public. While the structure is magnificent, the exhibit itself is top-notch. See past dukes, their art collection, and their lifestyle from the Middle Ages to the Renaissance.

A favorite exhibit of mine is the Abbey of St. Benigne, which is also the Museum of Archeology. You will appreciate the beautiful Romanesque architecture built in the 11th to 13th centuries. The Cathedral of St. Benigne, the Abbey, and the Crypt are next to each other and makeup Place St. Benigne. 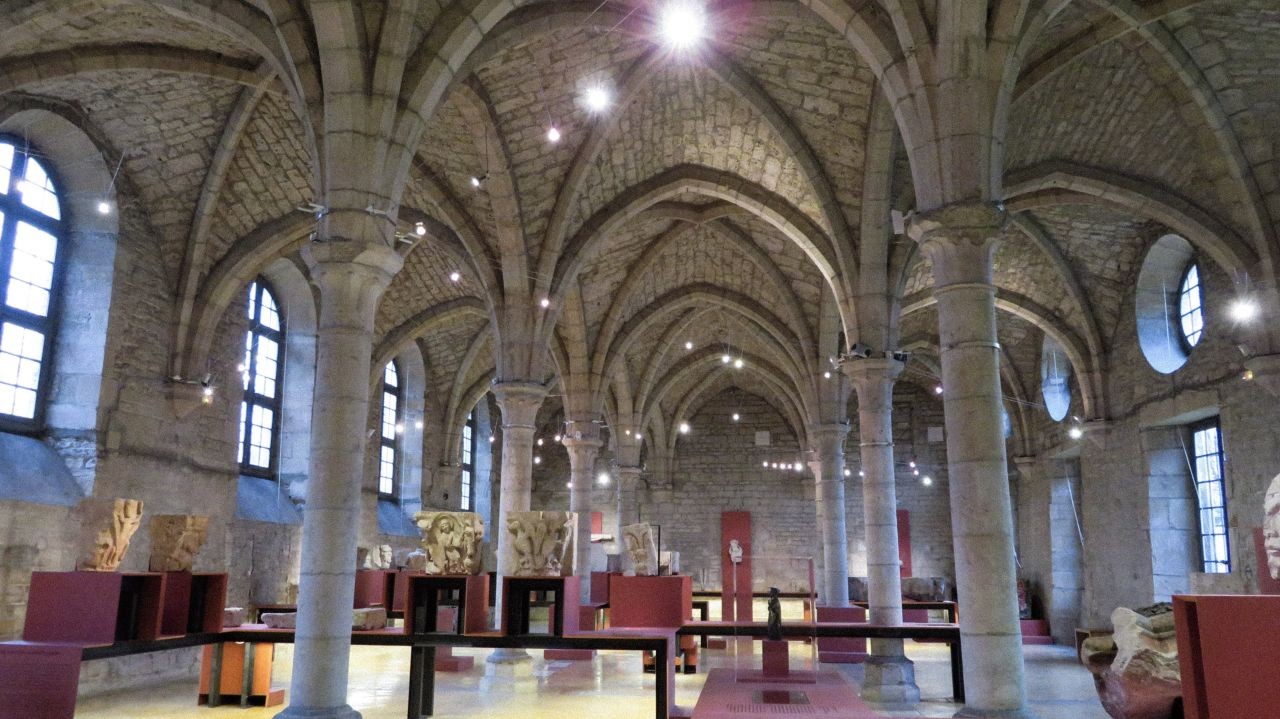 The Notre-Dame Cathedral of Dijon (13th century) is an imposing building with its very tall spires. There were many buildings under renovation when we were there, including the Grand Theater and the Museum of Contemporary Art. But, you can still visit the Cathedral of St. Michael and St. Philbert. 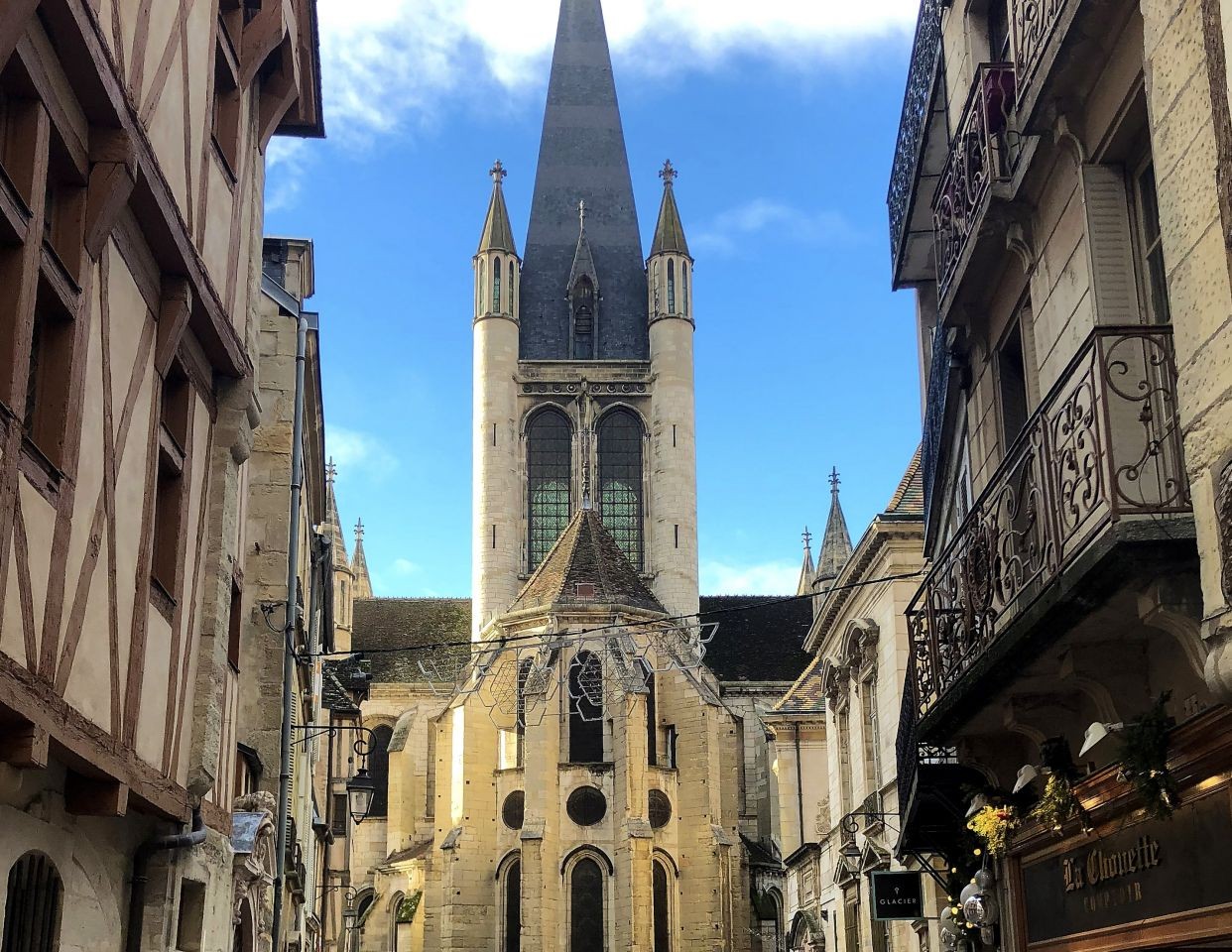 See my other pictures of Dijon in the gallery that follows. 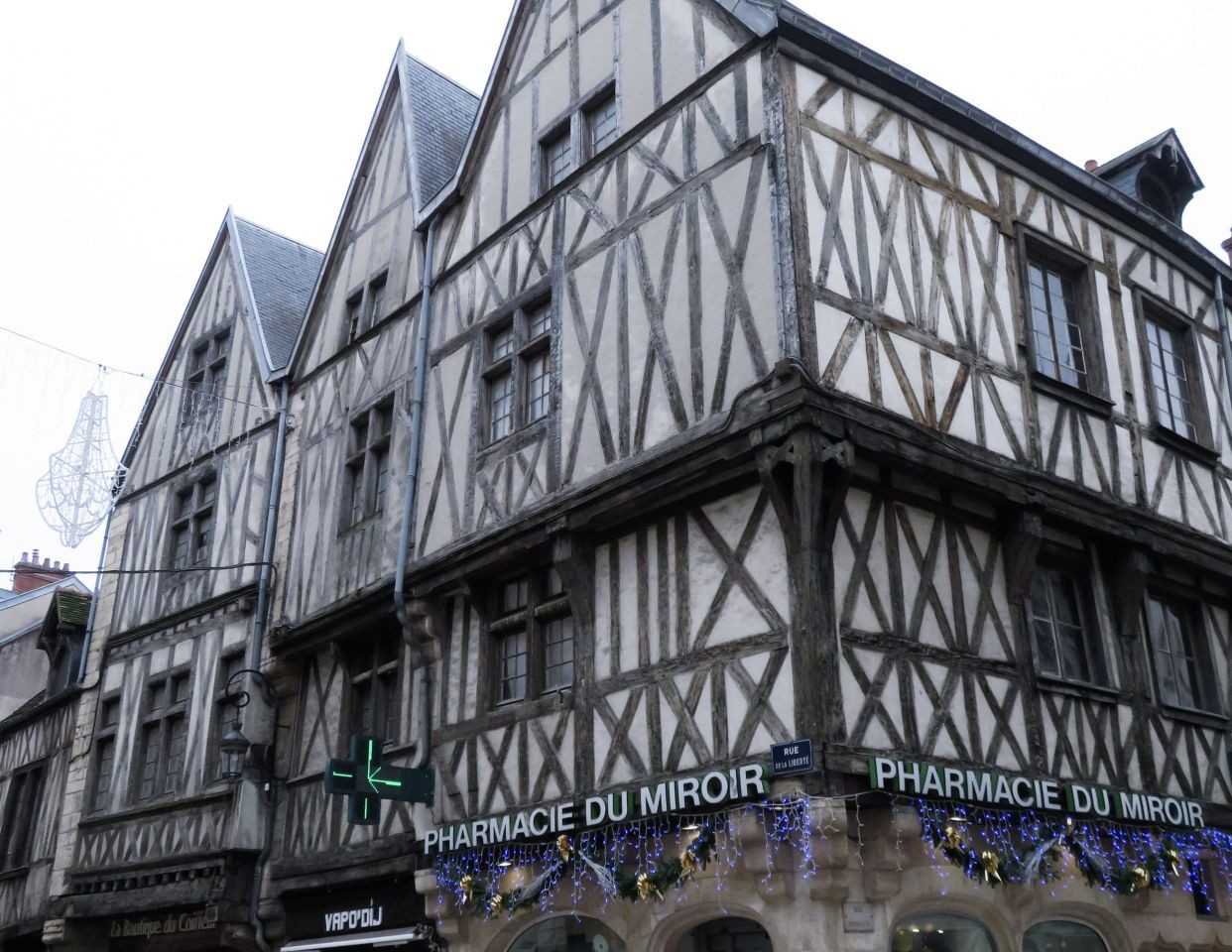 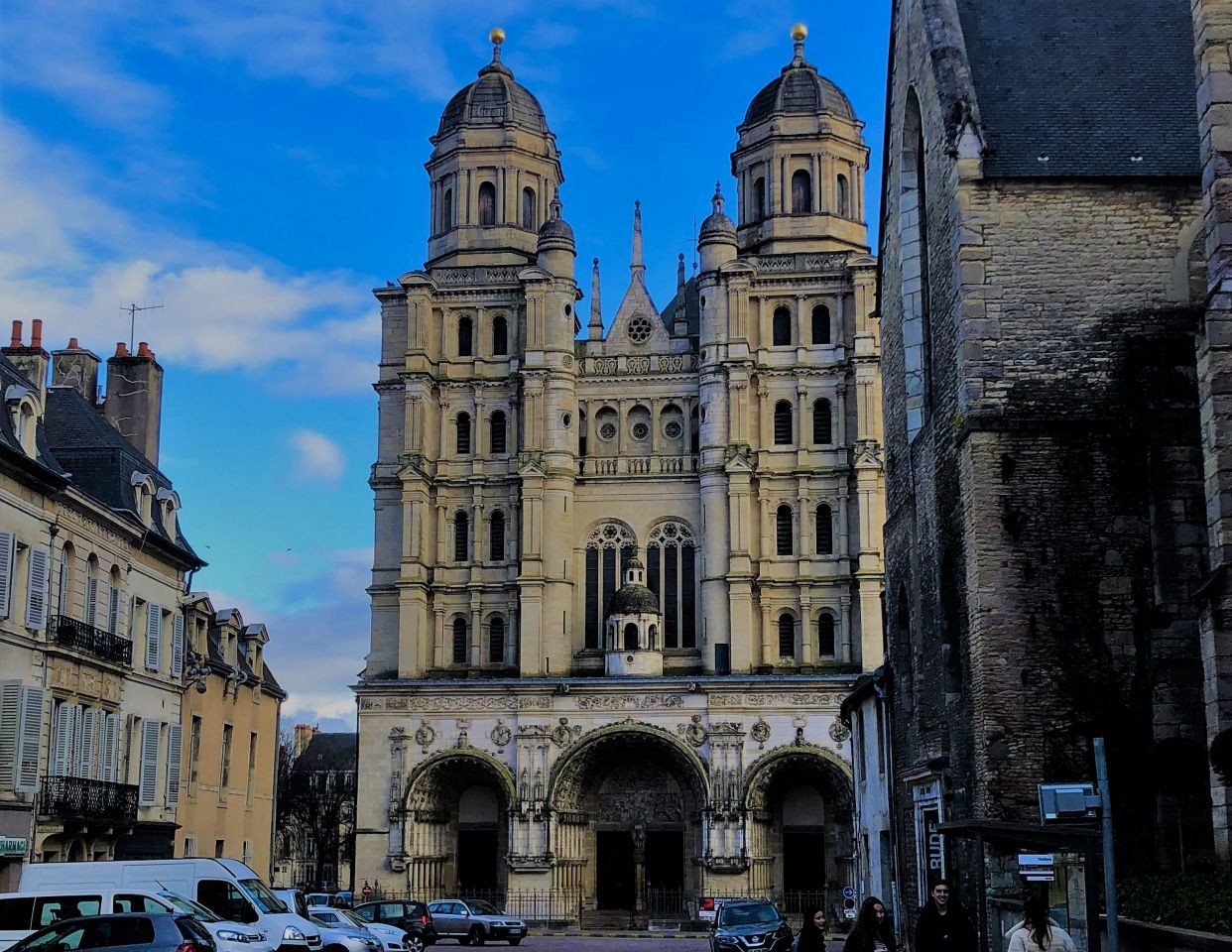 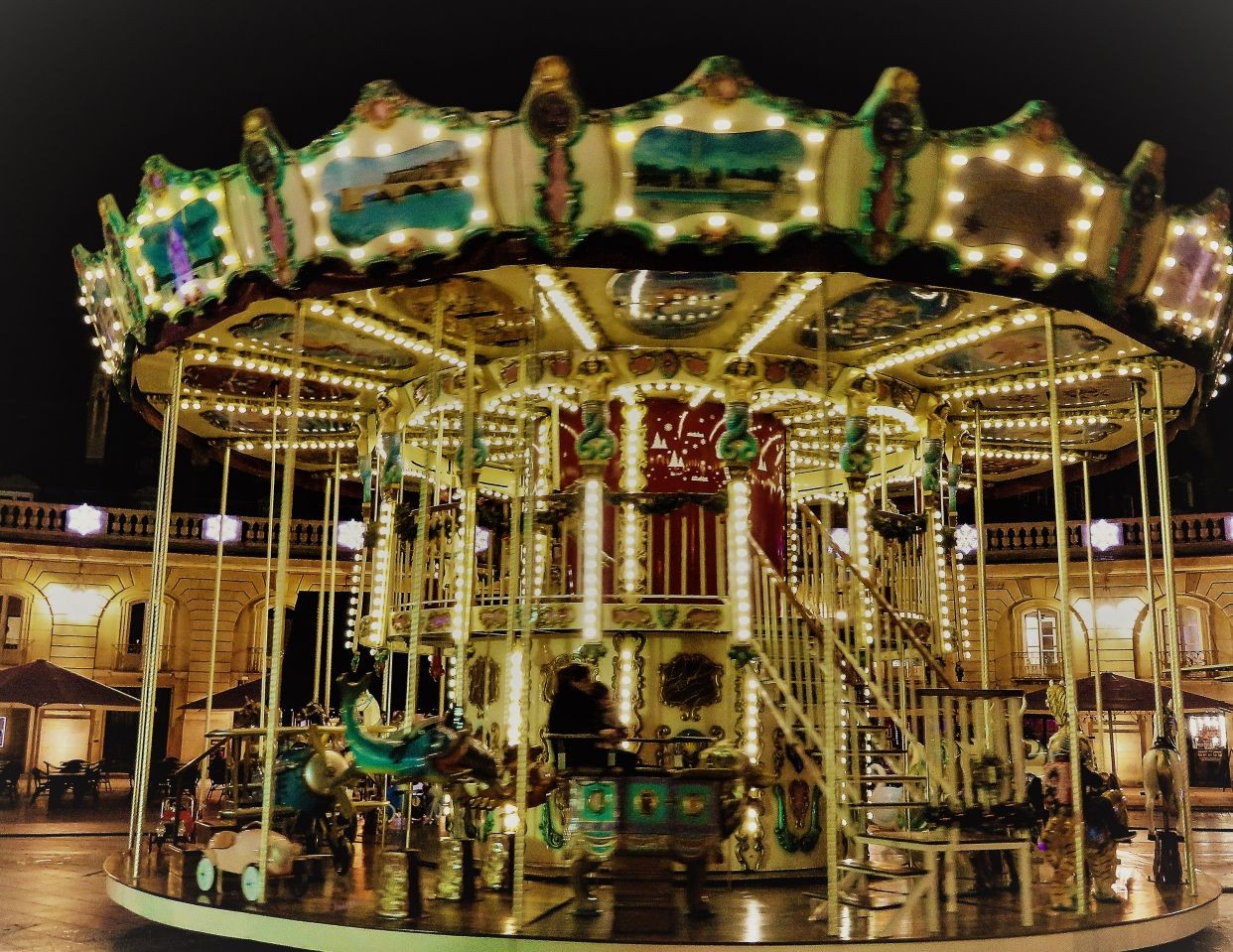 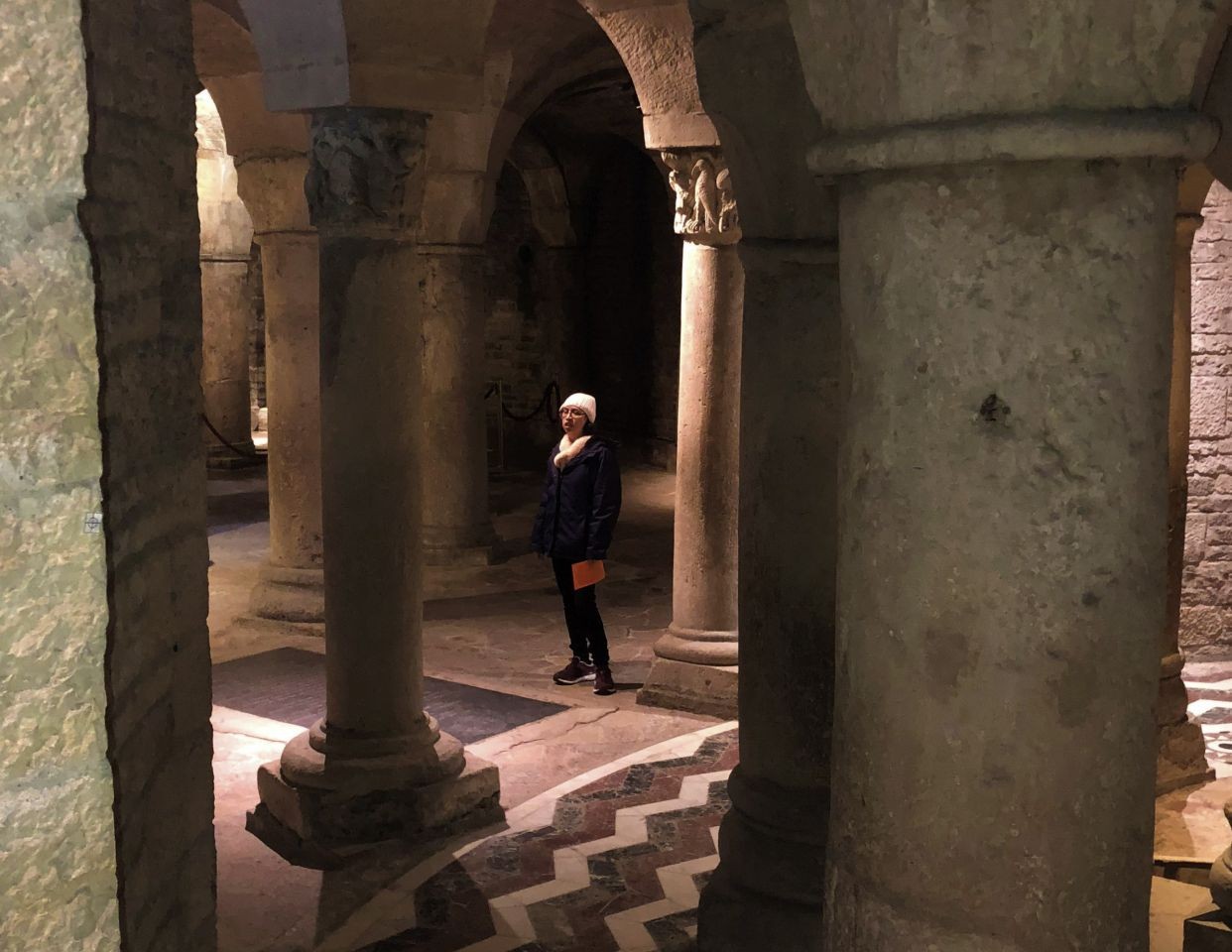 I Fulfilled My Number One Bucket List to Live in France, What's Next?