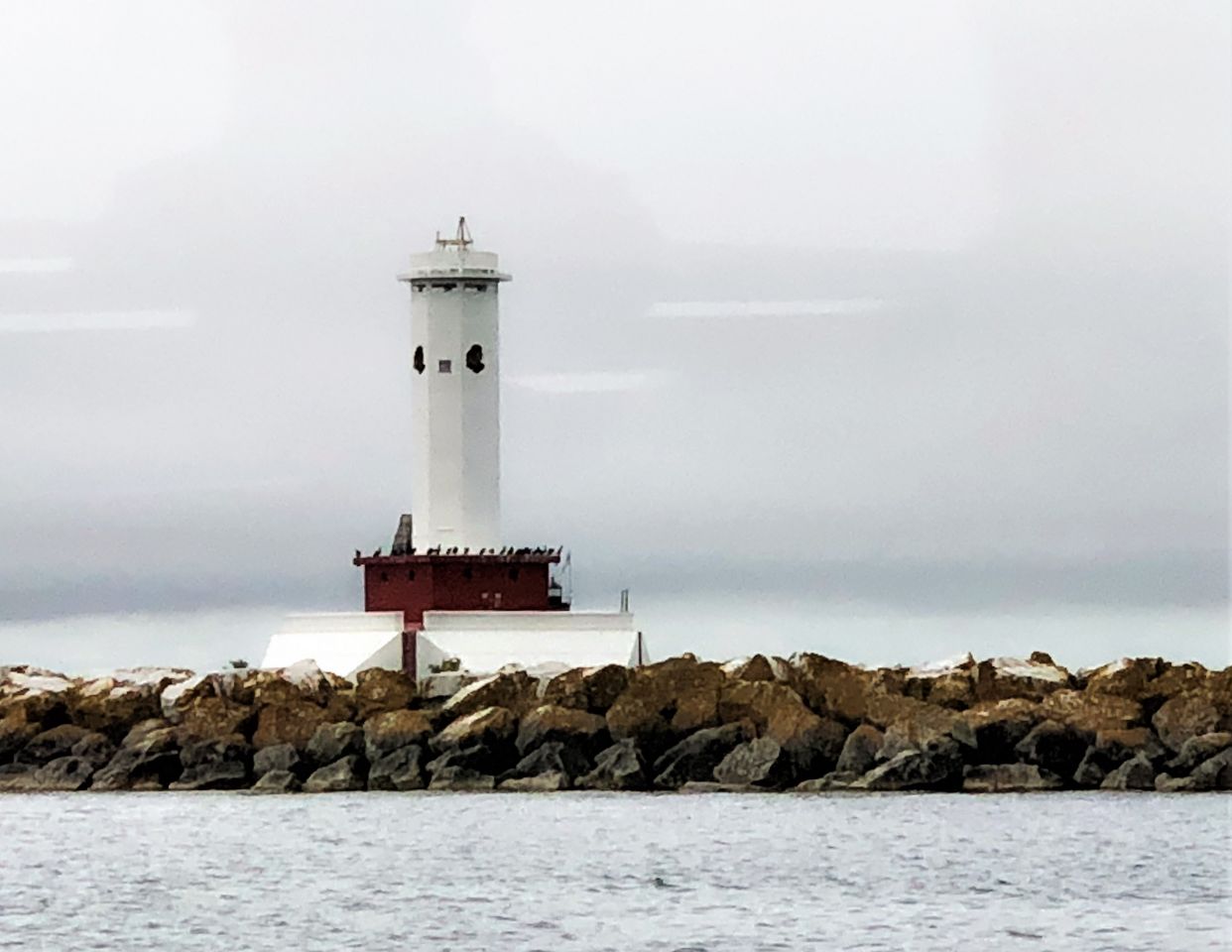 For those of us who have lived close to the sea, a lake vacation is a different experience.  But, if you want a place that will change your mind about lake vacations and lake beaches, check out Mackinac Island on Lake Michigan.  Some of the best beaches are on Lake Michigan i.e. without the extensive shoreline and the clinging sand. 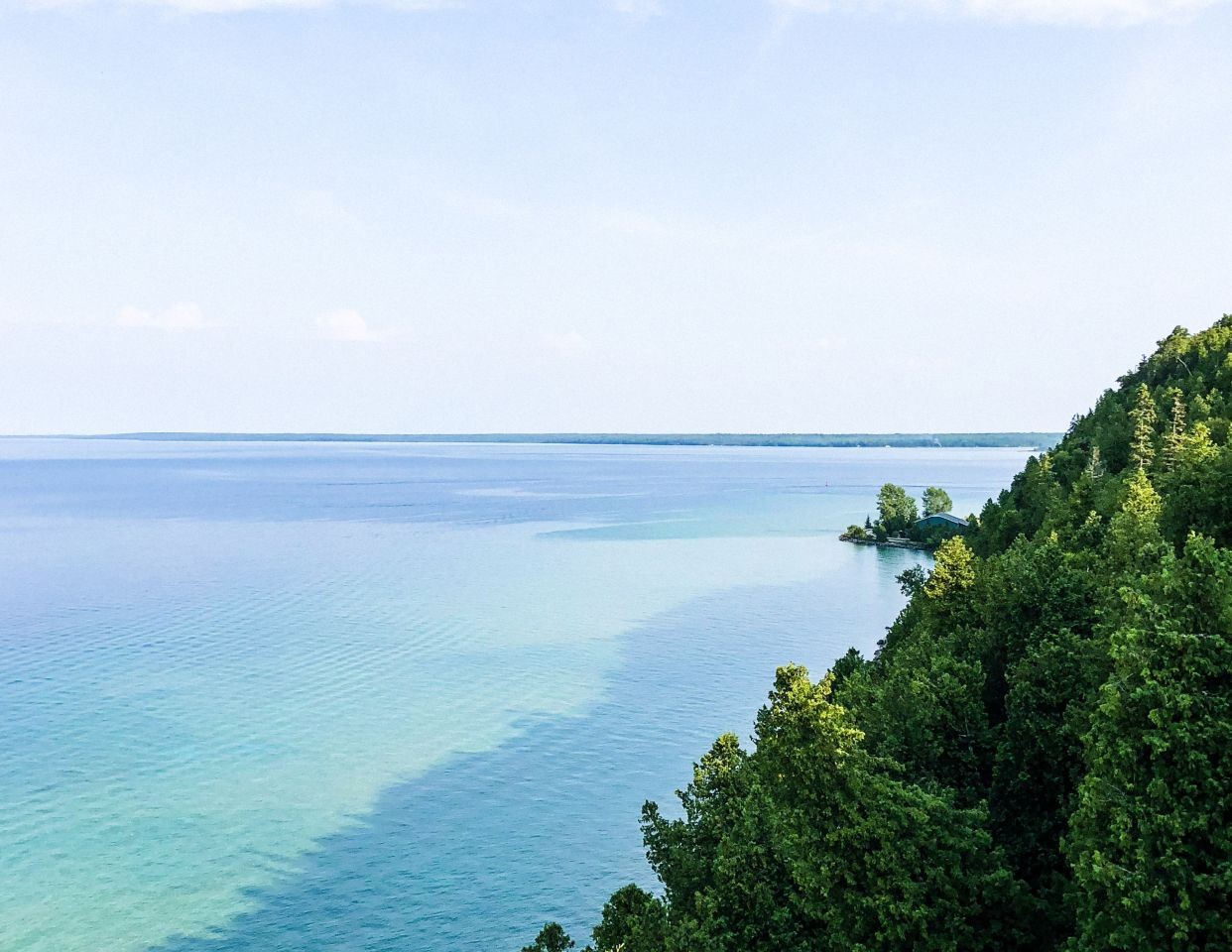 It's a little island on Lake Michigan and Lake Huron between the lower and the upper peninsula of Michigan. Well, it's actually on the Lake Huron side, but you wouldn't know the difference.

Mackinac Island (pronounced Mackinaw) is little known to most people outside of the Midwest.  I went to school in Michigan, and Mackinac was always on the virtual travel bucket list of places to visit.

Decades later, and in retirement, I finally made the trek.

My husband rushed his annual summer visit to northern Michigan anticipating our departure for France. He goes every year to visit his relatives and old friends. Since he was able to convince us to go on this trip, he decided to add Mackinac Island on the itinerary as a bonus.

With the subsequent frenzy of our move to France, our summer trips fell entirely off the radar. So, here's my effort to revive our lovely visit to Mackinac Island. 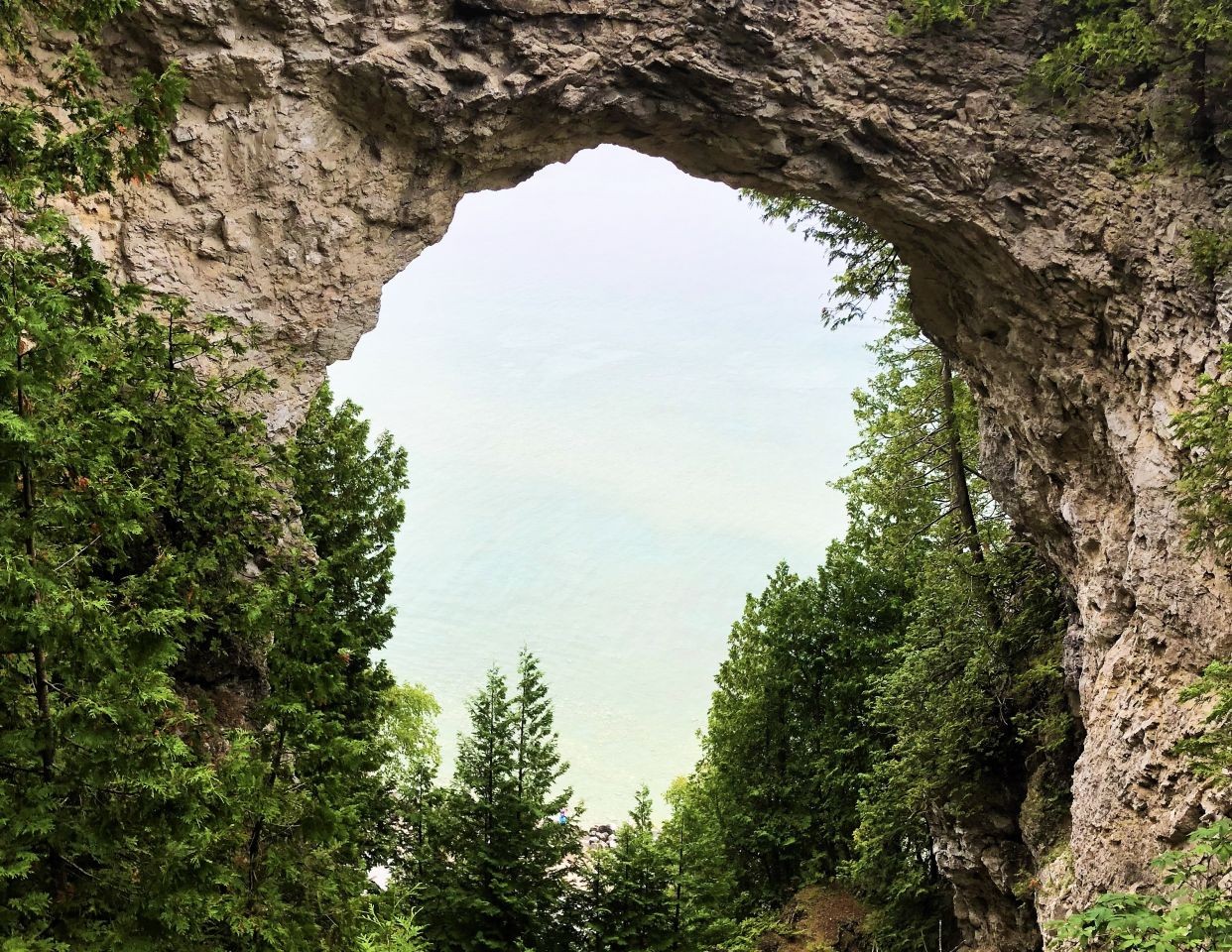 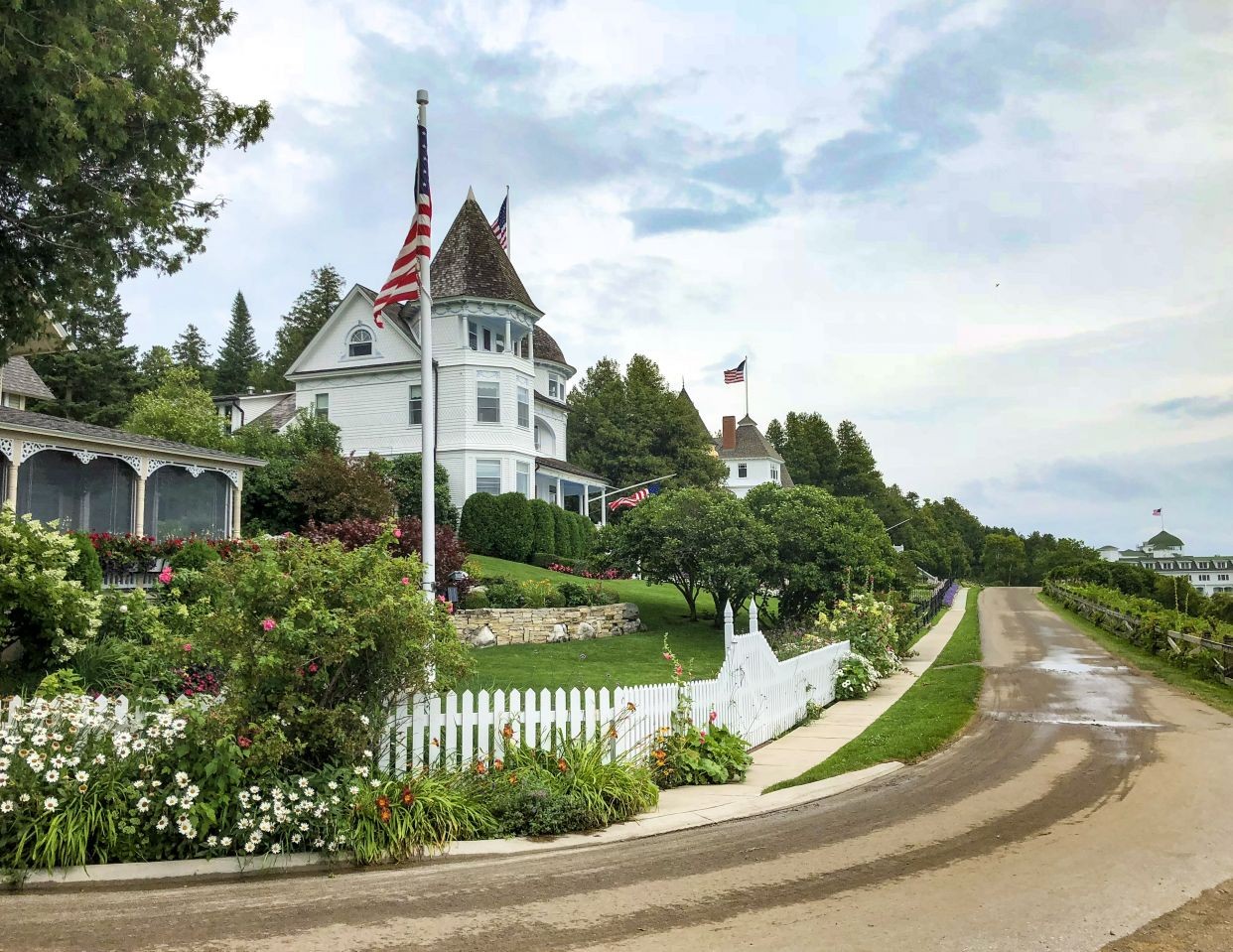 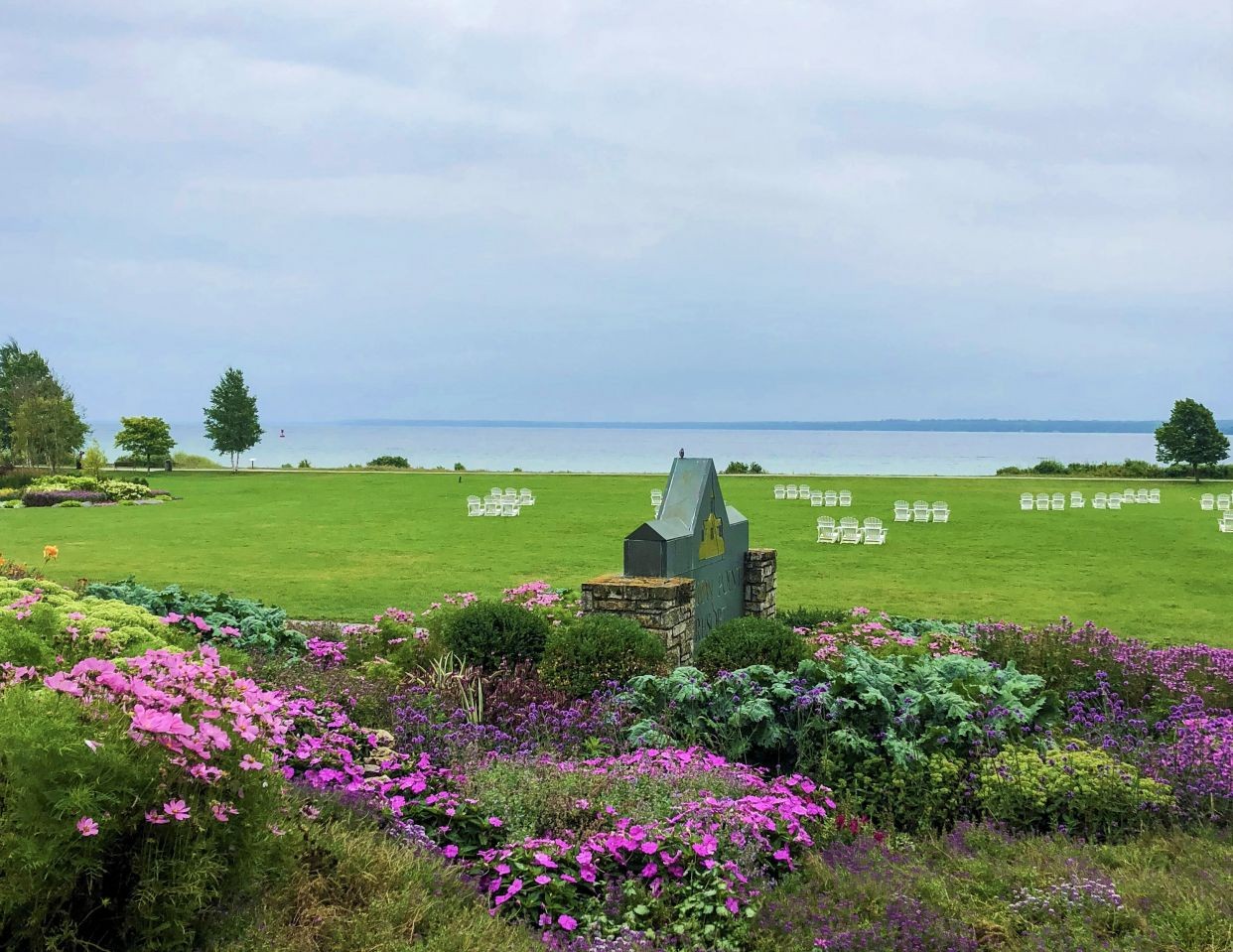 No Cars on the Island

​There are no cars on the island except for emergency vehicles. You won't find many places in the U.S. that will provide this complete car-less experience. What is remarkable is that it has been this way since 1895 -- not just a recent climate change promotion.

At first, it was because it scared the horses, then later, it was to preserve its quaint, historical, pre-auto ambiance. The simple act by the village council to ban "horseless carriages" was prescient, and it kept the island's natural beauty. More power to the village council of today, the State Park Commission, to resist the pressures of development and commerce!
So here on the island, you can take long walks and take deep breaths. If you have not experienced a smog-free environment for some time, here is your chance to give your lungs a break!

It is a Working Island

​Mackinac is a working island. There are 500-700 horses on the island that take care of city services like trash, recyclables, and deliveries. There is a U. S. Post Office, but they don't deliver mail, but Jeff Bezos can have your Amazon package delivered to you -- by horse and carriage, of course.

You can get a cab or a limo, but it comes with a slow and sometimes stubborn horse. Hotel buses pick you up from the harbor and deliver you and your luggage to your hotel by horse and buggy.

All food is shipped to the island by boat. I've seen the Sysco Foods truck on a cargo boat. They deliver the orders, but they never leave the harbor. There are police officers on the island, and they can give you a speeding ticket for...biking too fast.

Your "Hop On Hop Off" bus is the largest carriage you will ever see (30+ seats).  Six horse will haul the bus plus the tourists around the island.  You can rent your own carriage with or without a chauffeur. There are lots of bike rental places offering all types of bikes - for people or pets. Or, you can bring your own bike.
If you want to go horseback riding, there are many stables available. Here's the downside -- there is horse manure everywhere, and yes, it smells! 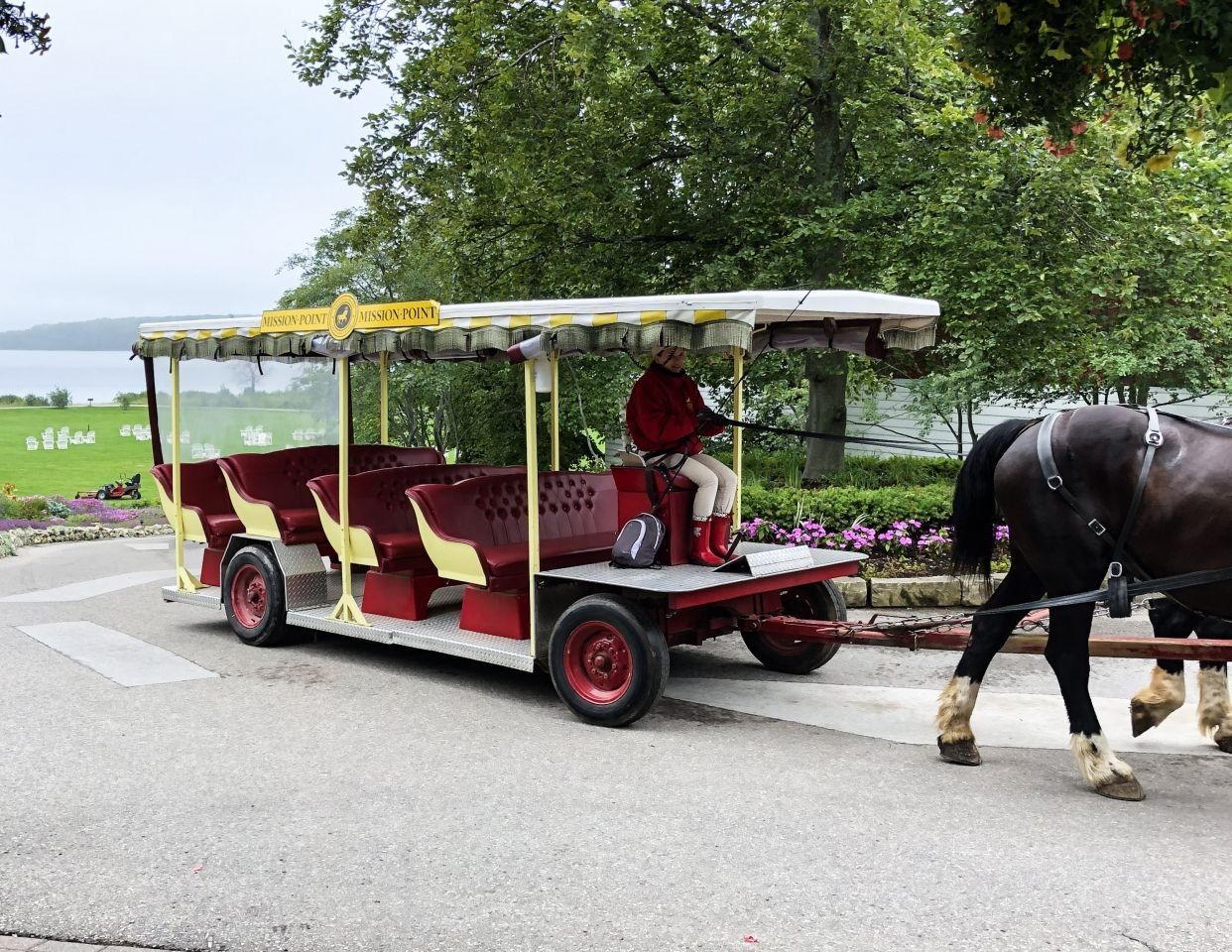 ​Lake Michigan is pristine, and I hope it stays that way.

The beaches are clear with blue-green waters. You can see right through to the bottom. Its natural beauty is truly food for the soul.

You can gaze at the limestone cliffs, the Arch Rock, and the Round Island Lighthouse on the horizon. There is a 5-mile bridge, which divides Lake Michigan and Lake Huron that connects the mainland (Mackinac City) to the upper peninsula. You can drive to the upper peninsula, then take a ferry to the island.  The quickest way is to take the Star Line Ferry from Mackinac City directly to the island. It's all very organized and neat.
A few people live on the island year-round. The majority of people on the island are seasonal residents or workers.  Season workers work the summer and leave in November.
The lakes freeze in the winter, and the last ferry crossing is sometime in January. We've talked about staying on the island until the first snowfall. It would be an adventure, especially for those of us who live in the South.
We've seen films of winters on the island, and it is very picturesque, but it can be harsh. They keep a few horses on the island but snowmobiles takeover.  Are they considered horseless carriages?

Mackinac Island is a State Park

​Eighty percent of the island is a state park.

It started as a military outpost in the late 18th century, first with the French and then some back and forth between the British and the Americans. It became a National Park in 1875, the second only to Yellowstone. In 1895, the Feds transferred the fort and the park to the State of Michigan.
Fort Mackinac, which sits on a hill, is part of the state park, and so is the Governor's (Michigan) summer residence. Marquette Park (named after the French Jesuit priest who established a mission there in the 17th century) is a beautiful park in the center of town. It's fresh green grass is perfect for picnics, throwing frisbees or enjoy lazing under the sun.
There's a golf course, too, if you are into that. There are accessible hiking routes around the island and others, which are a bit more challenging. There are water sports and sailing, too. There's an annual amateur yachting race that starts from Chicago to Mackinac Island every summer called the "Mac." It is the longest yachting freshwater competition.  Mackinac Island is an outdoor paradise. You can be as active or as relaxed as you wish.​

​What about the 20 percent?  It is made up of the private commercial side.

The Grand Hotel and the Mission Bay Inn are the two largest hotel resorts located on either end of the island. You might remember the movie "Somewhere in Time" with Christopher Reeve. It was filmed in the Grand Hotel.  You can enjoy the movie aspect of the hotel, but for me, the views from the terrace are spectacular.

There are a lot of old Victorian houses that are now B&B's and inns. There are excellent restaurants, pizza places, fudge shops, and tee-shops.  Some of the shops are very touristy, unfortunately. I think the city tries very hard to keep the commercial side "classy," in keeping with the rest of the island. 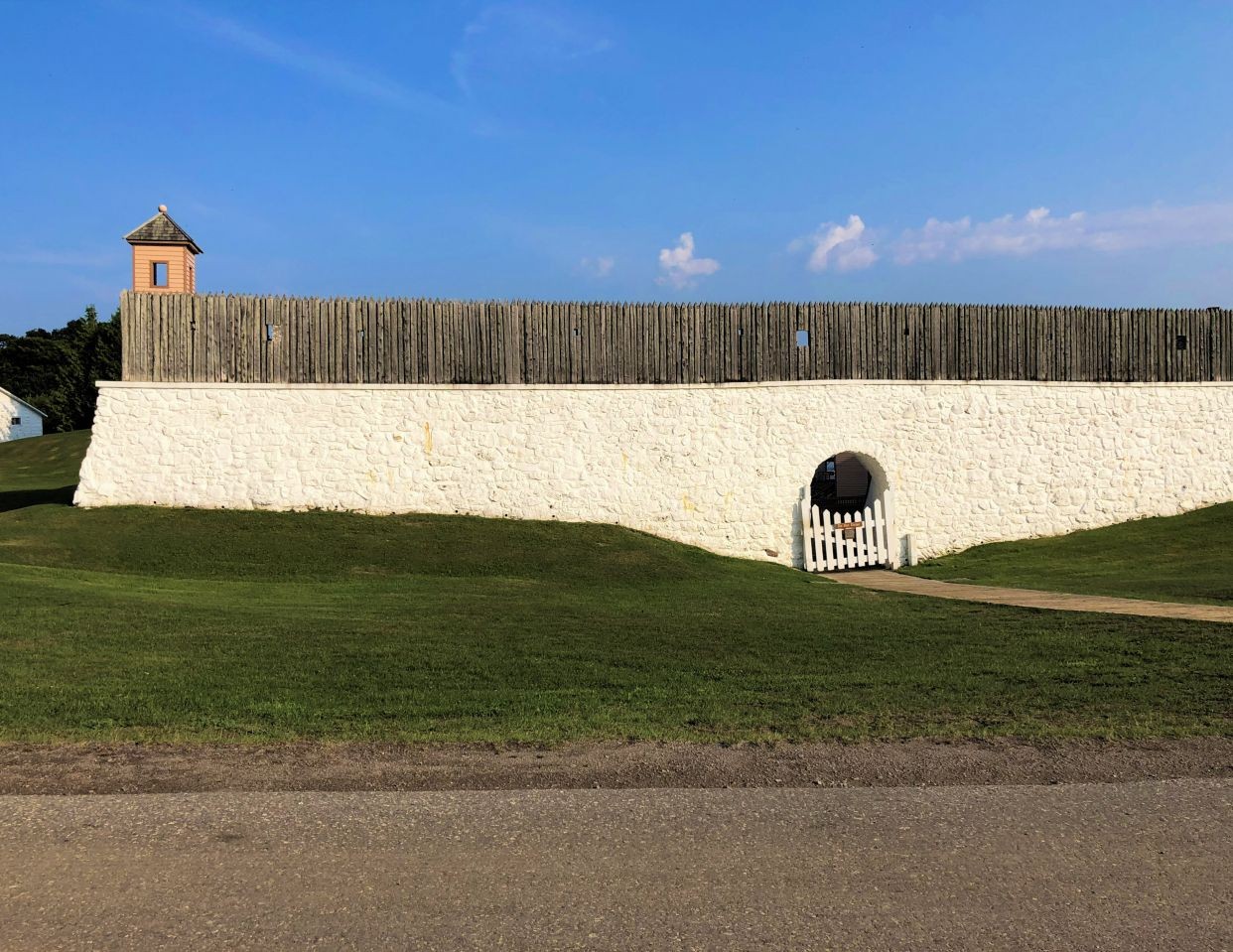 ​The best thing about the island is that it is nostalgic and wholesomely American.

I read that back in the days, soldiers, from the old Fort Mackinac, used to come back to the island to visit to get a sense of peace and to forget the wars of the past. I understand that sense of peace and timelessness completely.  No sounds of traffic nor other stresses of busy lives.
People on the island seem so reasonable. Families, from grandparents to babies, are traveling together, biking, lying on the grass, or having a picnic, enjoying the outdoors. There are boy scouts training to be future leaders. You have young college kids working summer jobs like it used to be. You have the fort firing off their cannons on schedule.

People seem to be naturally patient, kind, and courteous. They make eye contact when they say hello or good morning. It's America, I remember, where you respect your neighbors, care about your neighborhood and environment. It's like stepping back to a time when all the world seemed right. 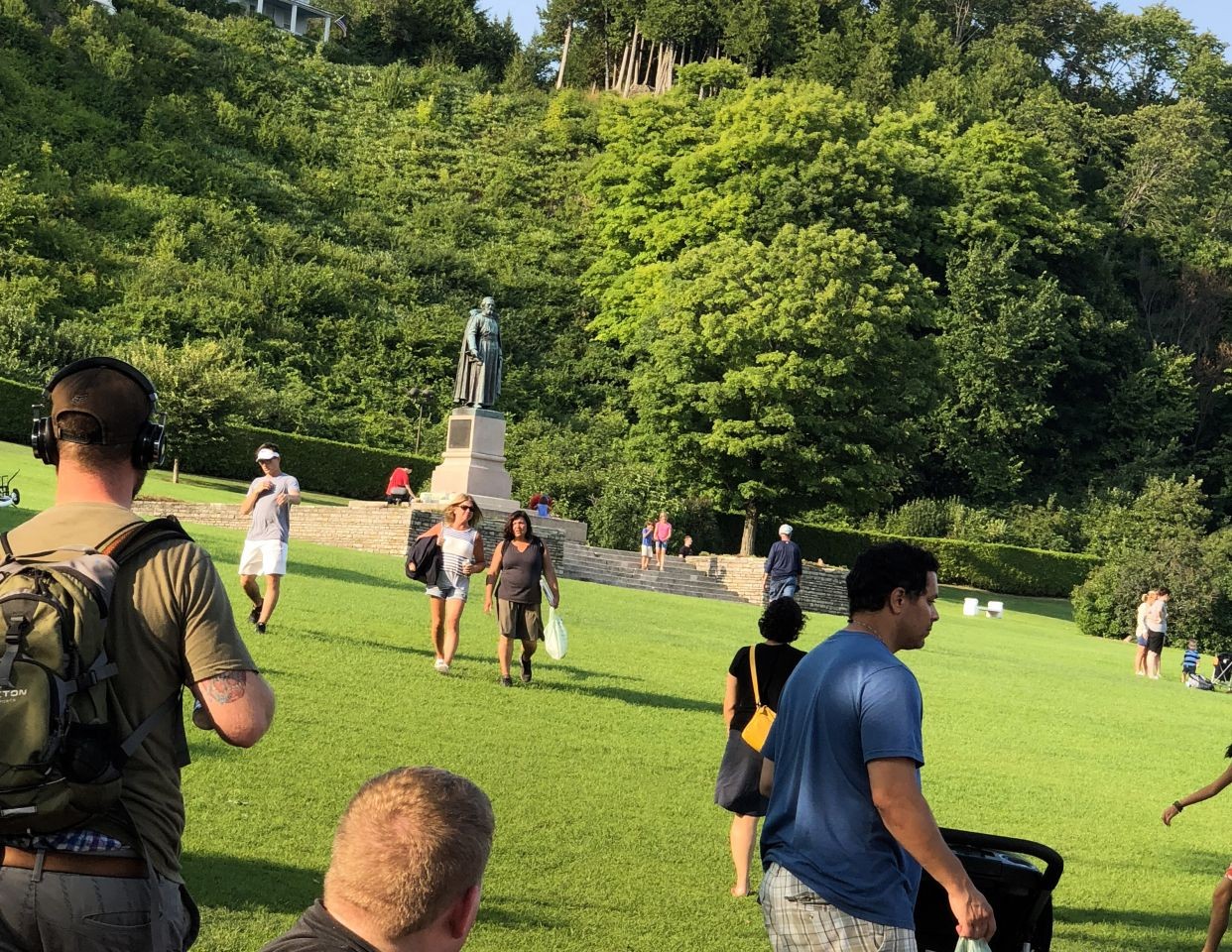 If you liked what you read, subscribe! Comments and suggestions are appreciated.

Read about Whistler Mountain in BC if you want to know about another wonderful outdoor experience!

Our Four Days in Eclectic but Gritty Barcelona
Dijon, France is More than Just About the Mustard