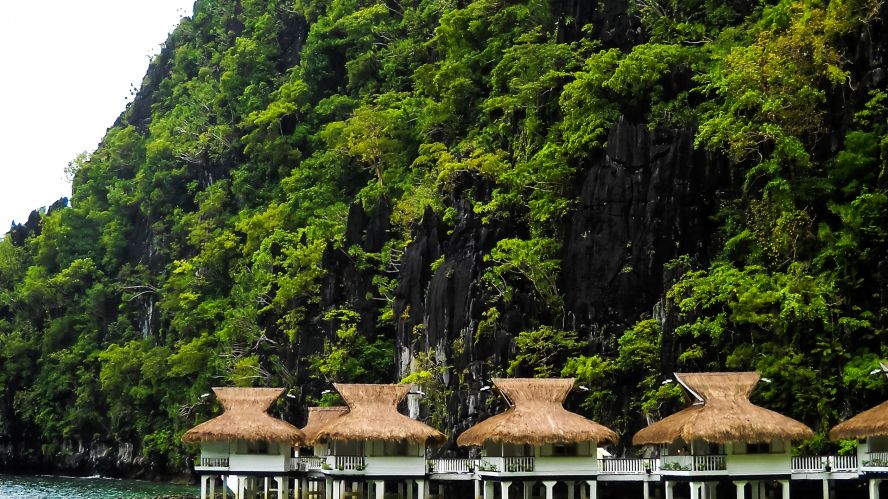 Our vacation to the island resort of Miniloc was my best vacation. The island is in the middle of nowhere, and is one of 7,100 island archipelago.  You've heard of wealthy individuals vacationing on island all their own, or owning the island altogether. Miniloc has 60 cottages and can have no more than 100 people.  This is the closest I will ever get to a private island vacation.  Now, I don't own a plane or a yacht, so getting there will be long.  But, it's worth every flying or boating hour to reach Miniloc. 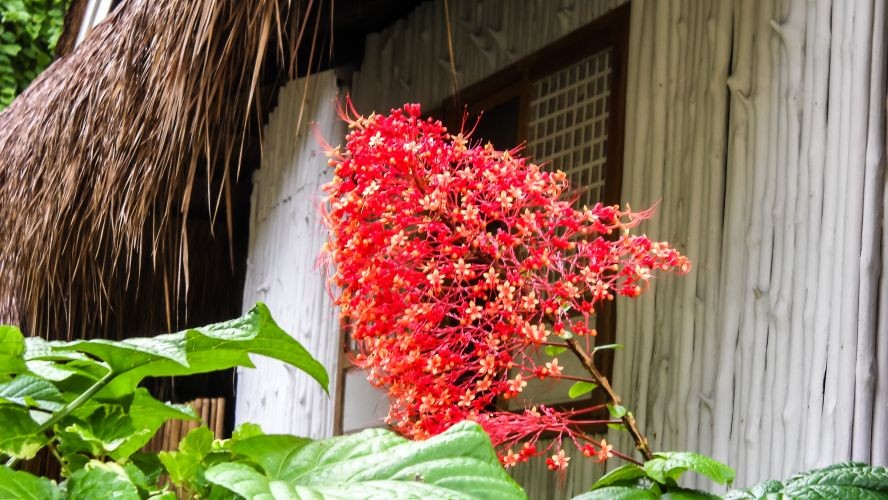 Getting There is Part of the Adventure

We are in the Philippines. If you are coming from the United States, you've flown almost a day to get there. The Philippines is an archipelago of 7100 islands. The province of Palawan, comprised of a total of 1788 islands, is the longest and narrowest island of the archipelago. Palawan lies in between the South China Sea and the Sulu Sea, southwest of Borneo in Indonesia. One of the islands of Palawan is the island of El Nido.  Miniloc is one of the islands close to El Nido.

Growing up in the Philippines, Palawan had a reputation of being unique, pristine, and somewhat mysterious. It is rich in natural resources, secluded, and hard to get to access. For years, it was out of reach of would-be real estate developers. Palawan has the most productive fishing grounds. It is a marine sanctuary, host to lush flora and fauna endemic to the island. The underground river in Puerto Princessa, the capital of Palawan, is a UNESCO World Heritage site. Palawan is the "Last Ecological Frontier of the Philippines." The island is also rich in natural gas, which is why China is claiming ownership of some of the islands of Palawan (Spratley Islands) in the South China Sea.

From Manila's domestic airport, you will take a private jet to the El Nido Airport, then a 45-minute private outrigger ride to this amazing island resort. The resort owns the planes and outriggers.

The city of El Nido is a grouping of about 40 islands on the northern tip of Palawan. One of these islands is Miniloc.

El Nido is famous for its crystal clear waters and ancient limestone cliffs.  Conde Nast rated El Nido, one of the most beautiful beaches in the world. There are many resorts in El Nido. One is a group of resorts called El Nido Resorts that consists of 4 island resorts: Apulit, Miniloc, Lagen, and Pangalusian. Employees at the resort told me that Miniloc was originally built by the Japanese, exclusively for the Japanese, in the heyday of the Japanese economy in the 1980's. It was eventually sold to a local group and more recently purchased by one of the largest development companies in the Philippines.

I don't know how or when the four resorts came together but the four share resources and amenities. Each resort differs in style, amenities and customer focus. I was very happy with Miniloc. It had a small beach, modern bathrooms and buffet meals. I'm all for unlimited food! Miniloc has only 60 rooms with a maximum occupancy of 100 guests. Nothing is grown on the island so all goods are transported via outrigger. The small number of guests helps keep the environment sustainable and manageable. 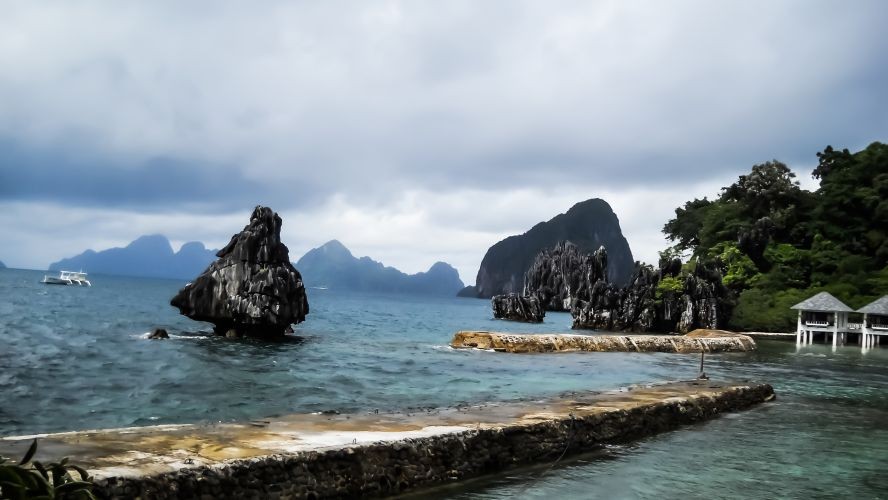 My friend, Trisha, was joining me for this trip to El Nido, and she flew from Washington, DC. Another friend of ours, Janet, who is a travel agent in Manila, was able to snag a three day and two-night package for us. It was at an offseason promotion that we thought very reasonable. Our flight was scheduled to leave the Manila domestic airport at 6:00 AM, which meant we had to leave about 3:00 AM to get to the airport. We did not know how traffic was going be like on the way to the airport, and we were not sure what terminal we needed to go to for this small airline. Luckily, traffic was light, the terminal easy to find, and the check-in process efficient. The passenger waiting lounge was air-conditioned and comfortable, and the bathrooms clean! We munched on breakfast snacks and espresso coffee available at the airport kiosks and waited, sleepily but patiently, for our flight.

The plane ride was uneventful and comfortable. The plane was a 737 with 60 plus seats. The lone flight attendant was very attentive to our needs, although there was no food or drink served. The arrival at the El Nido airport was exciting. Our plane was the only plane to land in the small airstrip. We were met by several very welcoming people and a very long jeepney to transport us to the pier, where outriggers were waiting. At the dock, we were given colored life jackets depending on which resort we were going to. For the entire stay, we were subject to a two-boat transfer process, a boat for shallow waters to take us from the pier to a larger outrigger for deeper waters. The crew was very hospitable and provided us with blankets in case we got wet and plastic bags for our purses or cameras. 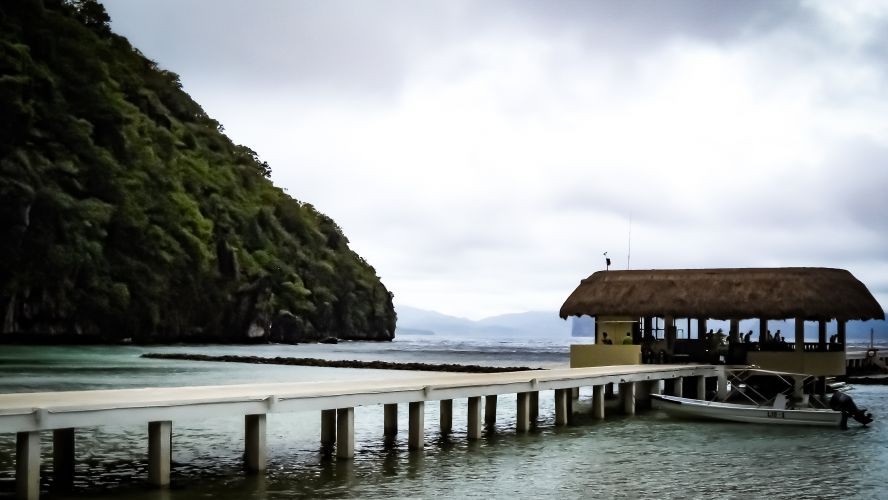 At the Miniloc Escape

At Miniloc, we were met by greeters, who provided us leis, and, in the main house, staff entertained us with local songs and offered us a local fruit juice drink. Then we were given a preview of meals and how to book for activities and spa services. We booked an island cave tour after a sumptuous lunch, but I opted to stay and nap in a cabana to nurse a cold. We stayed in a garden cottage, which was very comfortable. I checked the bathroom first and, yes, an upscale bathroom with hot and cold running water. I was content.

There were more luxurious cottages on stilts, which we did not book. The scenery was so beautiful with the backdrop of limestone cliffs around a small beach and lagoon. It was so beautiful and restful that you automatically relaxed. There were no crowds, and cabanas were readily available. Everyone was amiable, accommodating, and hospitable. 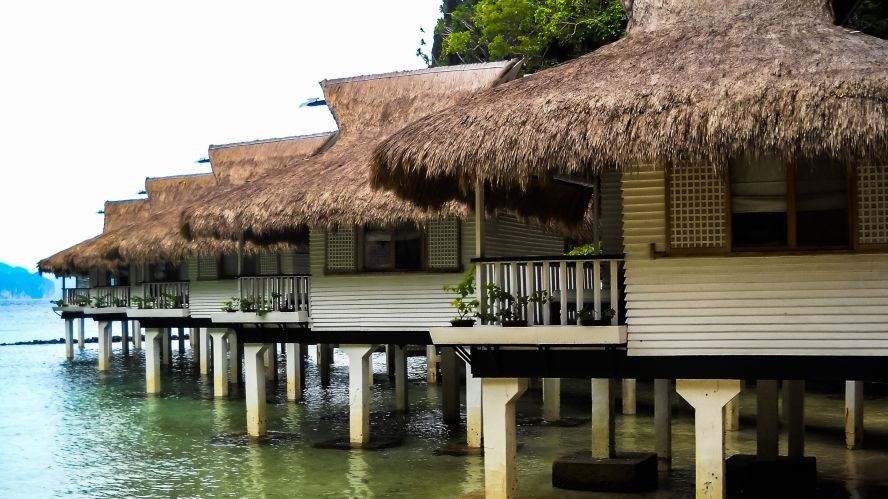 The Buffets, Relaxing Amenities and the Sea

I booked a massage later that afternoon, and it was great. I was the only customer at that time of the day, and I had the massage cabana to myself. The masseuse was quite good considering where we were so kudos to management for excellent staff training! The massage guaranteed me a good night's sleep, and I felt so much better the next day.

The next day, we booked to have lunch at Lagen Island Resort, which had a beautiful swimming pool. The resort received a renovated, and the cottages and the restaurant looked very attractive. I thought it looked too modern and too stark against lush foliage. The restaurant was well equipped. I had a chance to speak with the chef, and he was telling me about all the new kitchen equipment he got with the renovation. The highlight of the meal was a gigantic conch oyster. The conch measured as much as 4-5 inches wide and is used to make shell ornaments called "capiz." The oyster was grilled with olive oil and a local vinegar marinade. 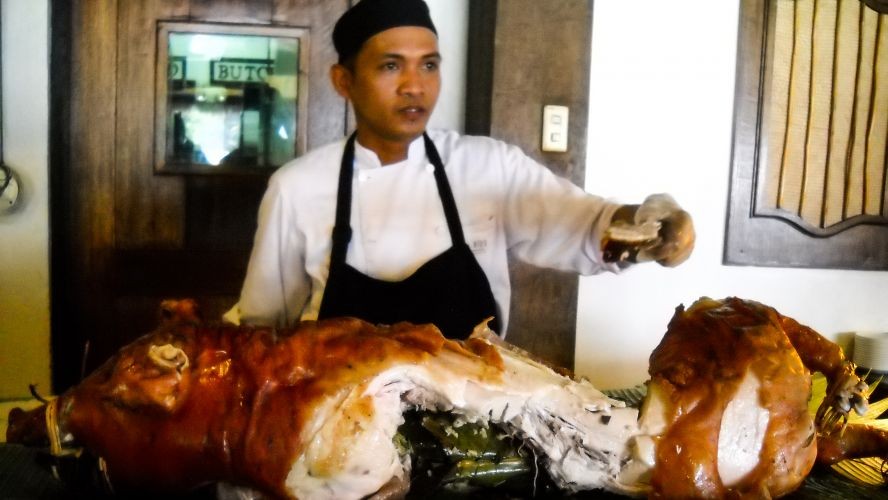 Back at Miniloc, I had booked a scuba diving class but prudently canceled it because I still had a cold and cough. Instead, we went to practice kayaking to get ready for our kayaking expedition the next day. I am so glad we had a chance to practice because we were embarrassing ourselves, so much so that our kayaking instructor, with a worried look on his face, had to ask us how old we were! The rest of the afternoon, I jumped off the pier and swam with the required life jacket while Trisha tried her hand at paddleboarding.

It had rained every day, especially at night. The sun managed to shine during the day, the two days we were there except the final day of our stay. The island had caught the tail end of tropical depression from the south, but the local coast guard cleared us for our kayaking outing. We planned to kayak in the large and small lagoon followed by snorkeling before lunch. We were leaving for the airport to return to Manila late afternoon, so we wanted to make the most of the day, rain or shine.

It was still showering when we got to the lagoons, but our kayaks were ready for us there. We did not have waterproof cameras, so our guides hospitably held on to our cameras to take photos. Due to "operator errors" in navigation, we grounded our kayak on a rock at the entrance to the small lagoon. It is called a small lagoon because of the tiny access to the lagoon. I will mention that we were the only ones in the group that experienced this problem. Trisha used her hips to thrust our kayak off the rock and back into the water. I couldn't stop laughing throughout our dilemma, and the crew laughed along with us. 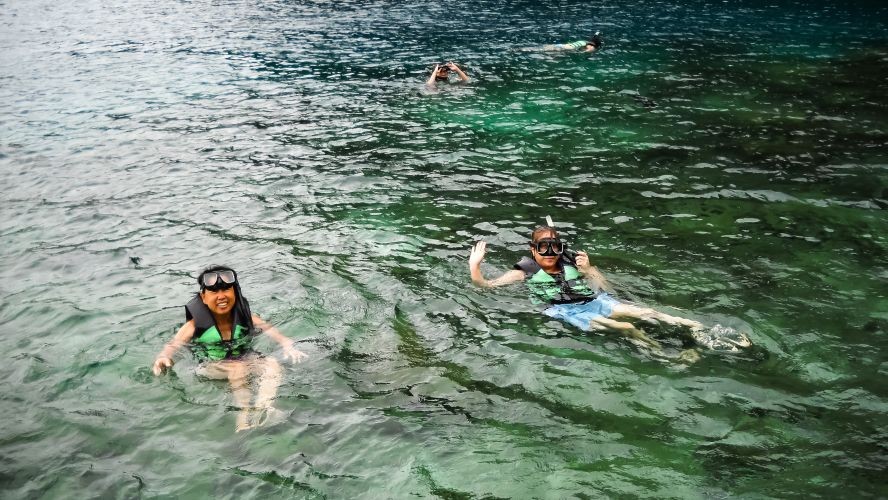 On the outrigger, we got to know some of our fellow guests. A lovely Swedish couple was living in Shanghai, two male partners, one from Brazil, the other from New Zealand. There was a group of women friends, some from China and some from the Philippines. Finally, there was a Muslim newlywed who we thought were from Malaysia. After kayaking, everyone had fun just jumping off the boat into the water and enjoying the very clear and the entirely lukewarm waters. The Muslim couple warmed up a little and seemed to enjoy the outing as well. The bride was wearing a burkini, which looked very confining. It certainly took the fun out of swimming. The guides showed us some flora and fauna native only to Palawan. There was a sea turtle and a small shark somewhere around.

Back at Miniloc, we joined our guides snorkeling for marine life around the pier. I wish I had had a water shoe because the coral sand and the rocks were sometimes sharp or slippery. The waters were hot and cold, combining warm seawater and cold waters from the cliffs. The colorful schools of fish were fantastic, and three-foot tunas were swimming alongside. 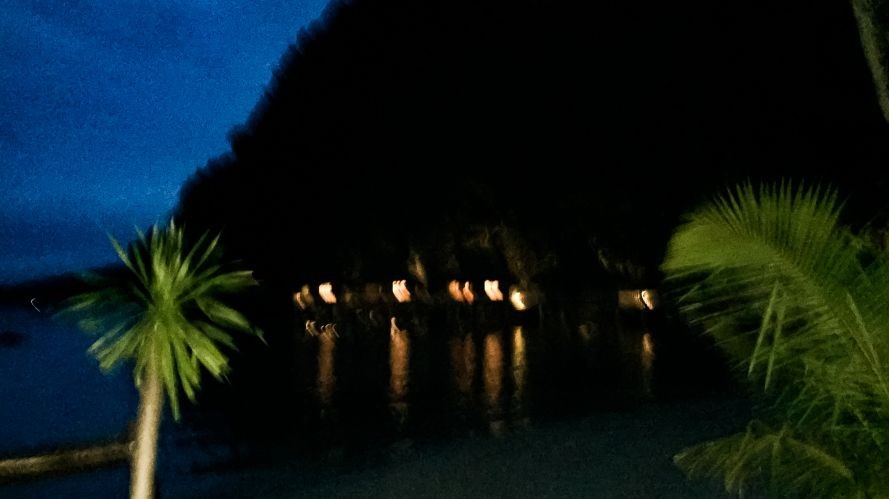 Nightime on the Island

Alas, the day was over. We had lunch, showered, and checked out. It was still raining, and we were given slickers in addition to the life jackets and towels for our trip back to the El Nido Airport. The sea waters were choppy, and we were soaked by the time we got to the airport. Check-in and security check was in a small makeshift building. Security officers insisted on checking our bags for contraband flora or fauna. They let most of us go because all they could see were wet suits and laundry. We weighed our carry-ons and hand carries and got our boarding passes. Trisha had this great idea of weighing herself on this massive luggage weighing scale. I saved myself the agony of getting on the weight scale because I knew the news would not be good. Meanwhile, Trisha must have thought she was on a diet of nuts and insects these last couple of days. Her loud screech brought her back to reality!

These two, somewhat rounder, ladies had a great time! 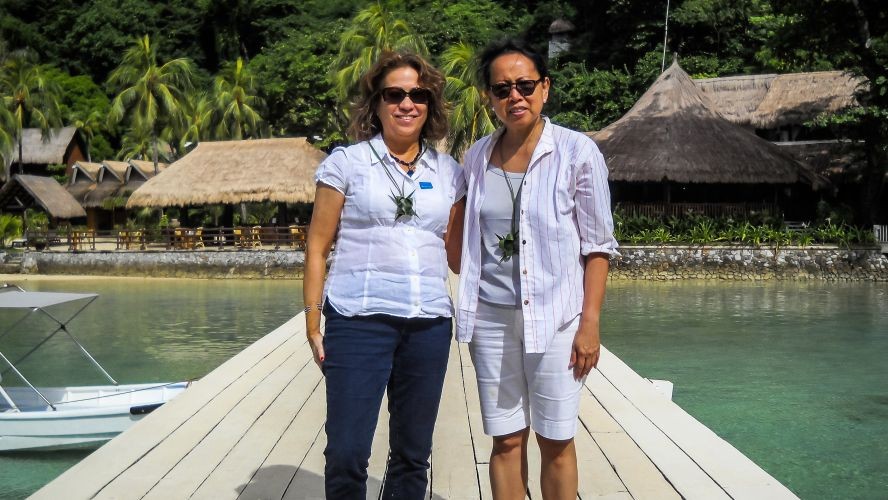