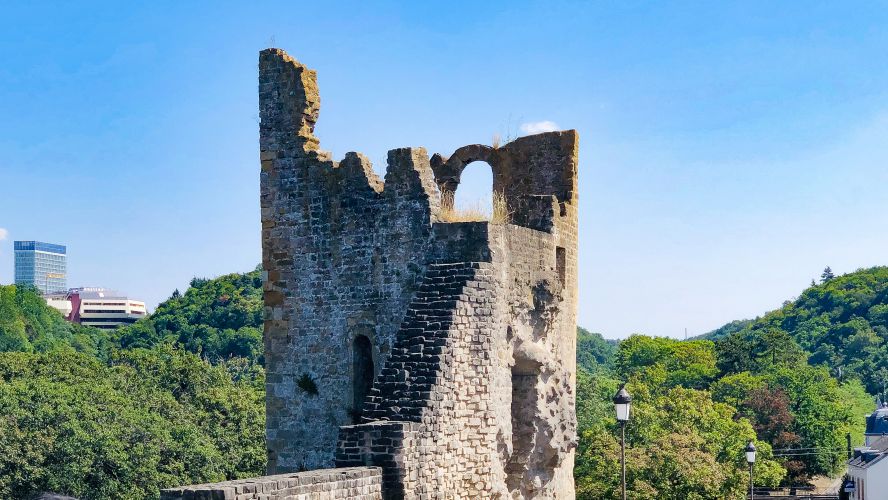 This Grand Duchy is the #28 smallest country in the world by total area. Luxembourg is a small country squeezed between Germany, France and Belgium in Western Europe.  Why visit Luxembourg? It may be a small, but Luxembourg is unexpectedly beautiful, vibrant, and yes, rich. 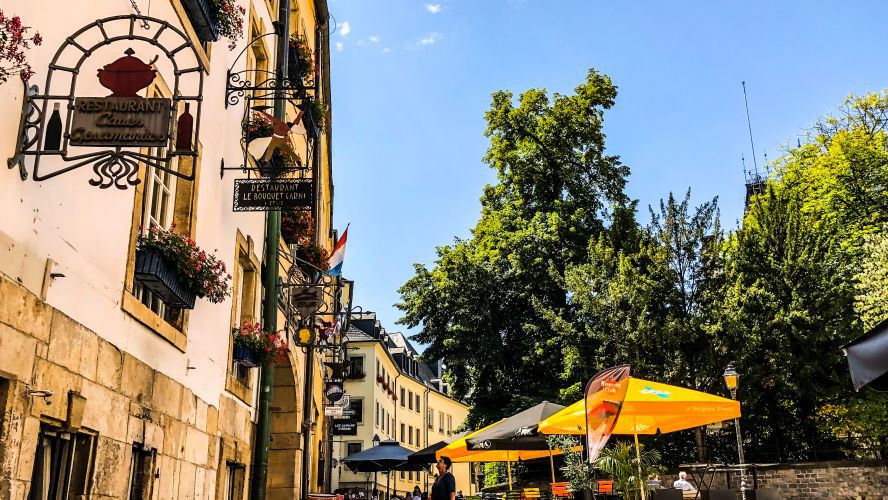 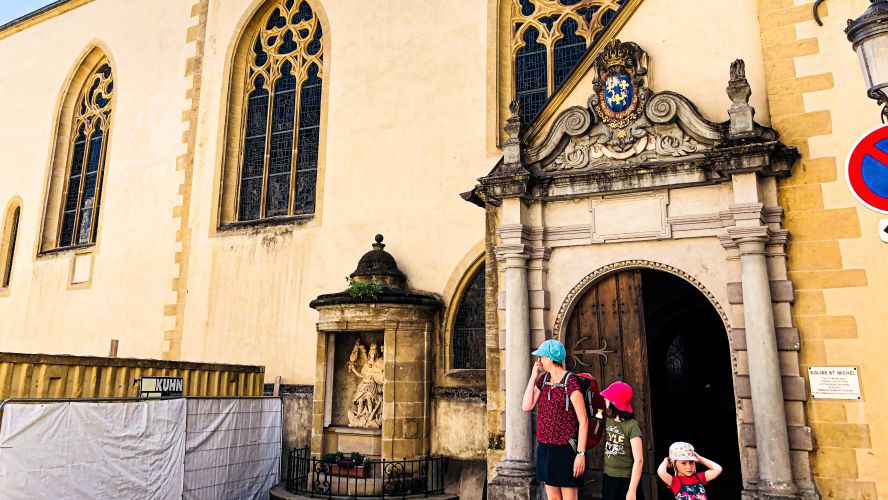 In the U.S, you would call this a "fly-over" country, meaning it is a country or state of no importance.  It is a place you bypass or fly-over, in the case of a plane.

We thought the same.  But we were wrong.  Read on.

Our trip to Luxembourg started in Hamburg. I had been on a "girl trip" to Ireland for 12 days, while my husband and daughter were on a Royal Caribbean Cruise to Scandinavia. On Deutsche Bahn (DB), we went from Hamburg to Braunschweig to visit a friend, and then to Cologne, and then to Luxembourg.

We were on the 19th day of our road trip around Europe, and we were travel weary. We decided to continue to Luxembourg to visit the daughter of a good friend of mine who had recently gotten married. Luxembourg was only three hours away, and we might as well add to our country count.  It was there for the taking, or should I say, "counting."

We had been following the Moselle River from Koblenz, Germany, where the terrain changed dramatically. Farmlands became rolling hills dotted with vineyards for miles and miles. The Moselle River is a large river that snakes from village to village offering fantastic scenic views. Courtesy of Google, I learned the Moselle flows through northeastern France, east Luxembourg, and southwest Germany. A tributary of the Rhine River, it joins the Rhine at Koblenz.

We were at the height of the summer, and I could see many campers in recreational vehicles parked along the river banks. It was a beautiful day and not very hot as it had been the last several weeks. I spotted some river cruises, and I just wanted to be on that deck to soak in the glorious weather.

I looked forward to Luxembourg, and I suspected we were in for a treat! 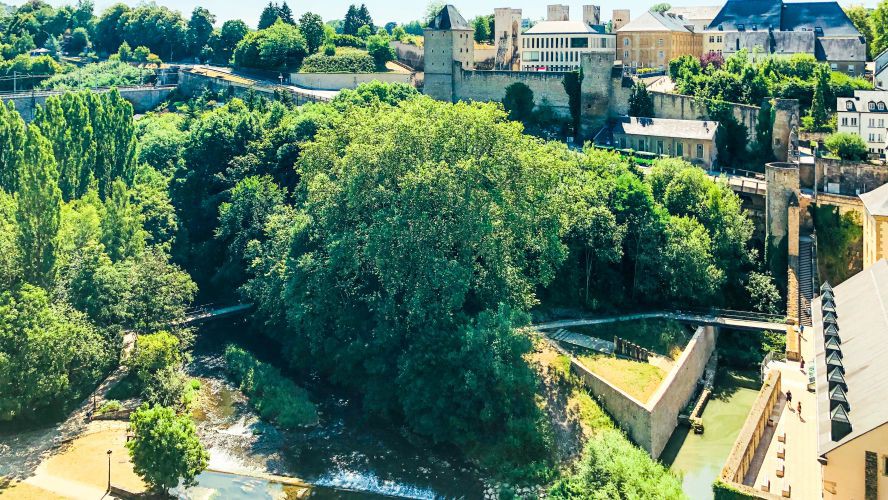 Scenic Greenspace Along the Alzette

​Luxembourg is what you call a Grand Duchy or a constitutional monarchy. It is the only one in existence today.

It first became a duchy in 1334 until Burgundy conquered them in 1443. For the next several hundred years, Luxembourg was invaded or absorbed by competing European powers - Spain, France, Austria, and Prussia.

Luxembourg regained its independence in 1815 after the defeat of Napoleon. It was named a Grand Duchy with the personal union to the Netherlands, meaning the country belonged to William I, the King of the Netherlands, and Prince of Orange-Nassau, but Luxembourg controlled their internal affairs.

Prussia also controlled its military installation as it was previously part of the German Federation. Sounds like a mess?

In the interim, William I ceded land to Belgium and France and finally to Germany.  In 1866, it became completely independent, although the Prussian garrison remained in the capital. William I offered to sell Luxembourg to France for 5 million florins (around 3 Million Euros), but Otto Von Bismarck disapproved of this.

Under the 1867 Treaty of London, Luxembourg pledged perpetual neutrality in exchange for complete autonomy. Prussia withdrew from the garrison, and the fortress dismantled.

The Grand Ducal is the House of Luxembourg-Nassau headed by the Grand Duke, a hereditary position. The Head of State is Henri Albert Gabriel Felix Marie Guillaume since the year 2000. 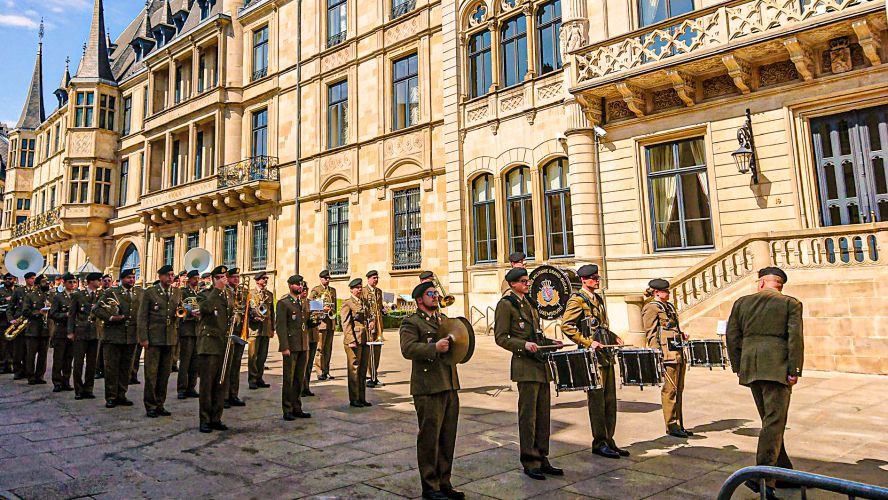 ​Luxembourg is sometimes called the Fortress of the North or the Gibraltar of the North. Why?

The story starts with Siegfried I, Count of Ardennes, who exchanged his land in Ardennes for an old Roman castle on a rocky ledge called Bockfiels or Bock. The Bock overlooked the Alzette River, which surrounded them on three sides, making it a natural fortification. Siegfried called his castle "lucilinburhuc," which means "little fort." This settlement grew to become Luxembourg.

The Bock fell on the left bank of the Rhine, strategically on the border between France and Prussia.  The fortifications became one of Europe's most daunting military fortresses and, thus, the name.
Successions of the best defense engineers from the Burgundians, the Spanish, the French, the Habsburgs, and Prussians expanded and reinforced the installation. The Bock became a system of underground tunnels and casemates built into the rocks. The tunnels were 23 km long and 40 meters deep. It had 40,000 square meters of bombproof rooms, which could shelter thousands of defenders and horses, equipment, workshops, and artillery, kitchens, bakers, and slaughterhouses.

Decommissioned under the 1867 London Agreement, the dismantling lasted 16 years, and the tunnel reduced to 17 km.  Luxembourg's Old Town and the Casemates became a UNESCO World Heritage site in 1994. 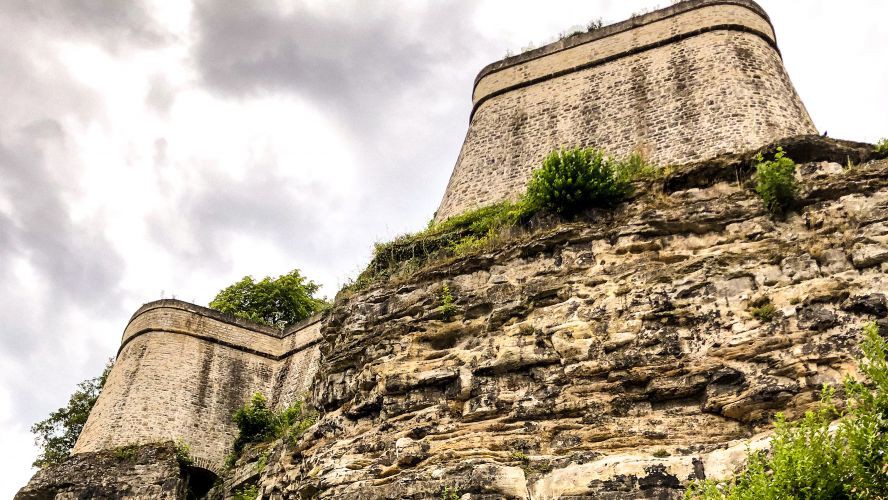 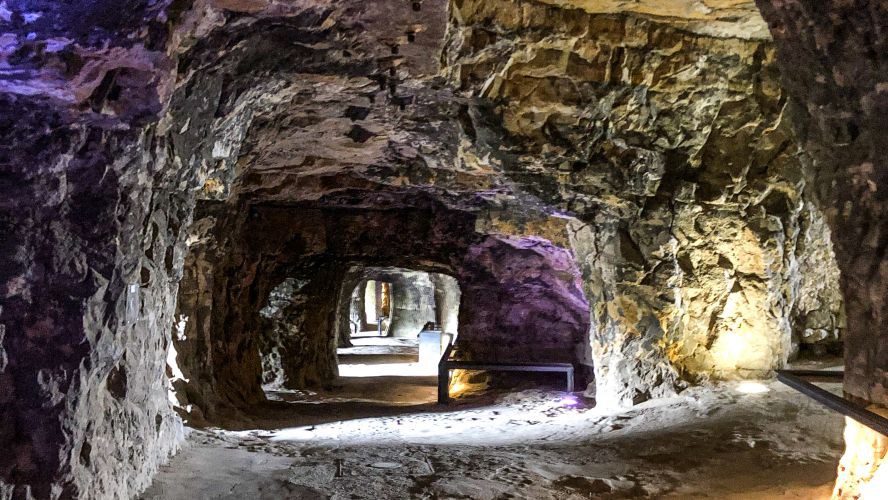 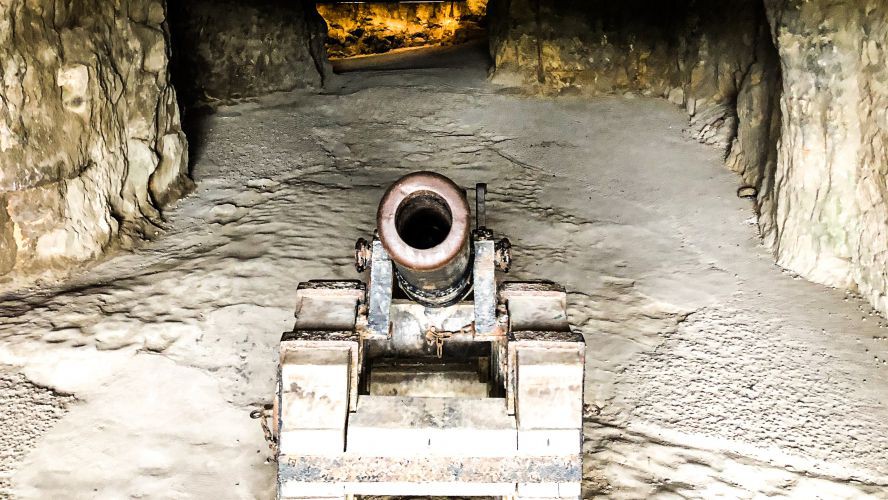 ​The citizens are called Luxembourgers, and their language is Luxembourgish.

The Luxembourgers are tri-lingual. The vernacular is Luxembourgish. German is used for written communication, while French is for official letters and law.

Luxembourgish is very similar to German comparable to the dialect spoken in southwest Germany.

The push for national identity gained momentum in the 1970s as the country became prosperous. Luxembourgish became a national language in 1985, a declaration of its independence. 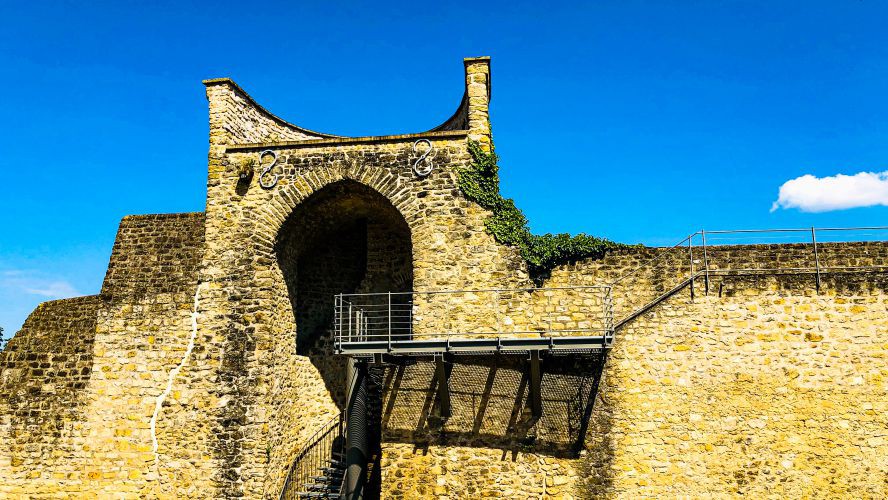 4. How Did They Become So Wealthy?

​Throughout its history, Luxembourg was in a chess match between France and Germany. In the mid to late 1800s, it lost parts of the original territory to France, Belgium, and Germany.

The loss of land and territory impoverished the country. It was an underdeveloped agricultural economy. Like many countries in Europe, there was significant emigration to America. It forged an alliance with Germany for cast iron and steel in exchange for coal, which continued until WWII.

The county embarked on an effort to change their international presence. It became one of the first countries to join the League of Nations. After WWII, it joined the United Nations and NATO. It entered into monetary alliances with Belgium and the Netherlands. It succeeded in attracting big international companies such as Goodyear, Dupont, and Monsanto in the 1960s. They became an economic powerhouse when it drew the steel company, Arcelor.

The service sector, in particular, the financial services industry, began to grow in the 1920s after WWI. Favorable tax laws and banking secrecy laws caused a boom in Luxembourg during the interwar years. Continued diversification and changes in tax laws fueled the growth in this industry. Today, Luxembourg is a major player in all aspects of finance. Financial services make up greater than 80% of its GDP.

The financial sector produces a significant number of high paying jobs with significant accounting firms represented in Luxembourg.  They employ not just local citizens but many international workers. Higher than sixty-percent of all workers commute from other countries.
Luxembourg has the lowest unemployment rate and the highest minimum wage in Europe. It has the second-highest GDP in the world, second only to Qatar.
It's small but wealthy! 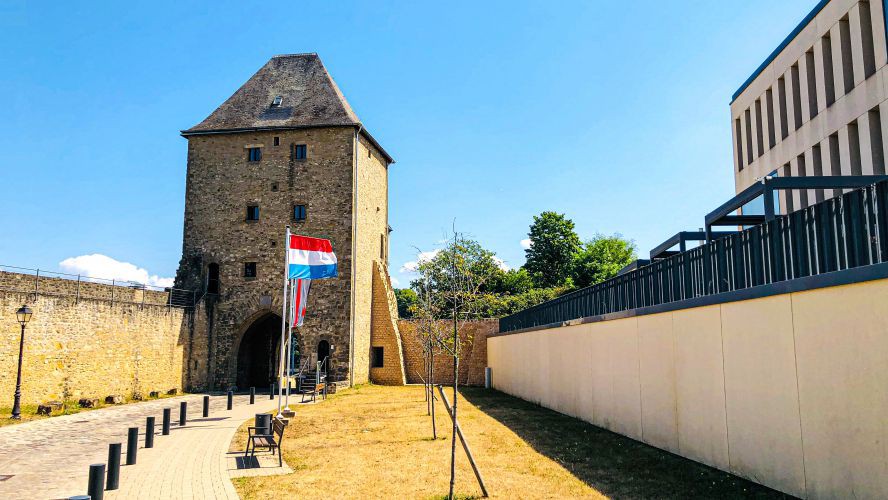 5. Why Are They Important?

​Luxembourg plays a significant role on the international stage. It often plays the role of intermediary between large countries. Its neutral part is essential in mediating between the two largest economies of France and Germany. They are in a strategic position to influence power.

The country hosts a large number of European institutions such as the European Court of Justice. The Schengen Agreement, Europe's agreement on visa policy and border control, established in 1985, was signed in the town of Schengen at the border where France, Germany, and Luxembourg meet.
Schengen includes 26 counties covering a population of 400 million people. 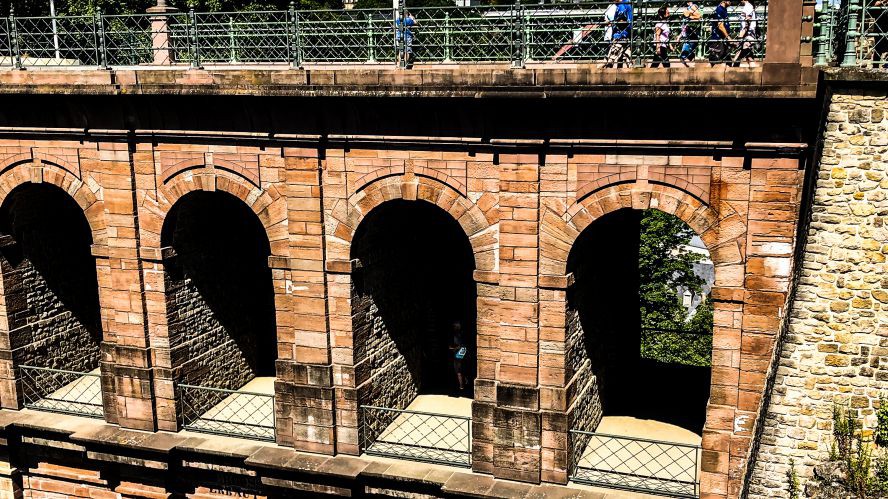 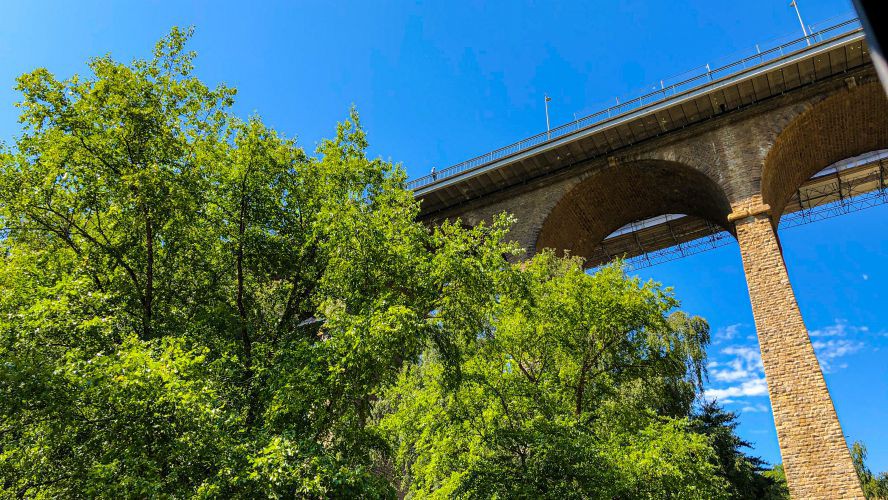 In addition to the Bock and the Grand Ducal, Luxembourg has Old Town neighborhoods in the valley below the rocky ledge. 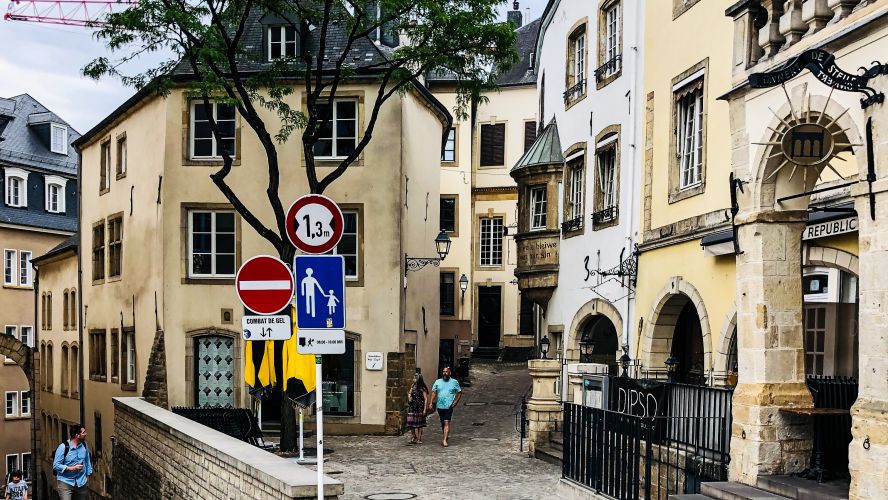 Back Streets in Old Town 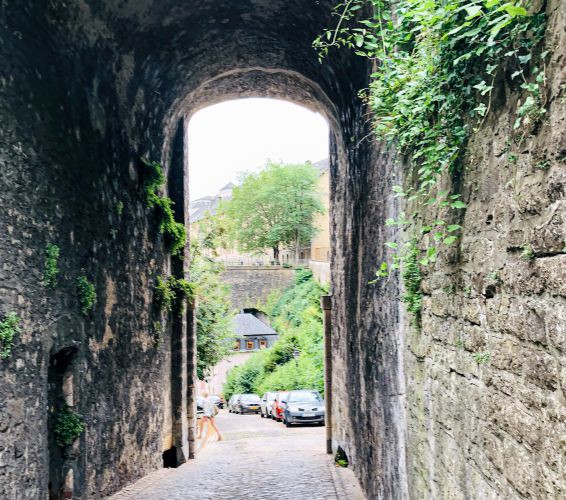 Back Streets in Old Town

​In addition to the Bock and the Grand Ducal, Luxembourg has Old Town neighborhoods in the valley below the rocky ledge.

There are old churches and the bridges (above) that connect the rocky plateaus: gardens, walk and bike paths, museums, and more. 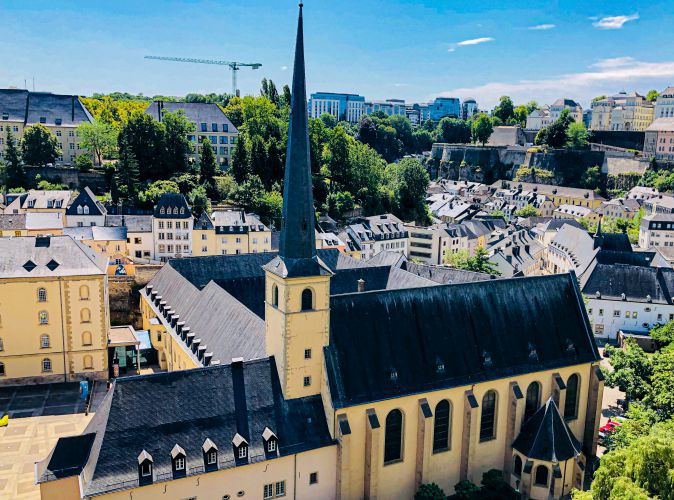 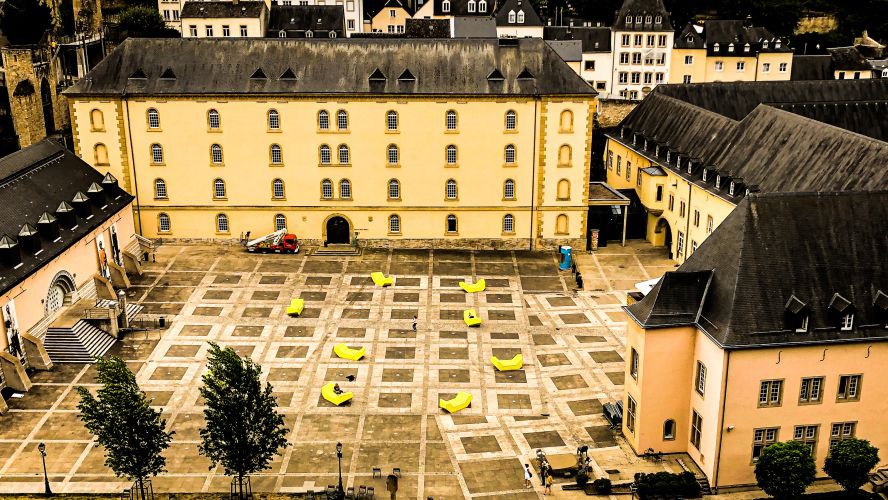 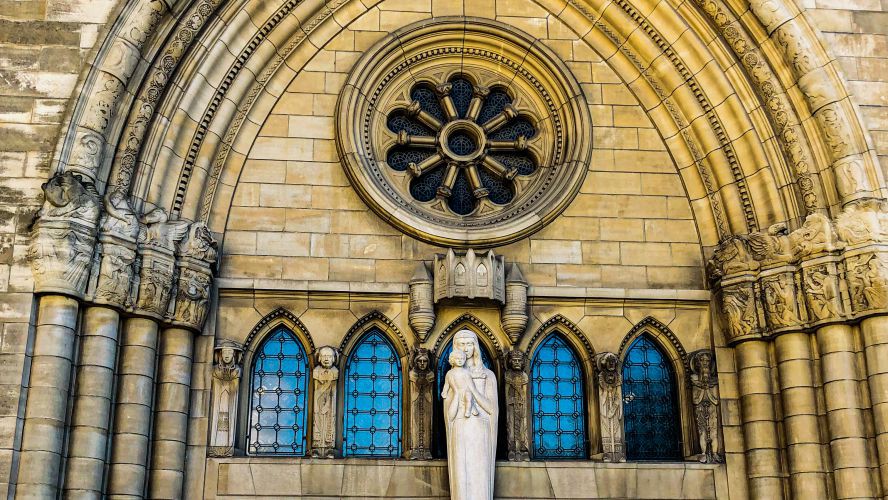 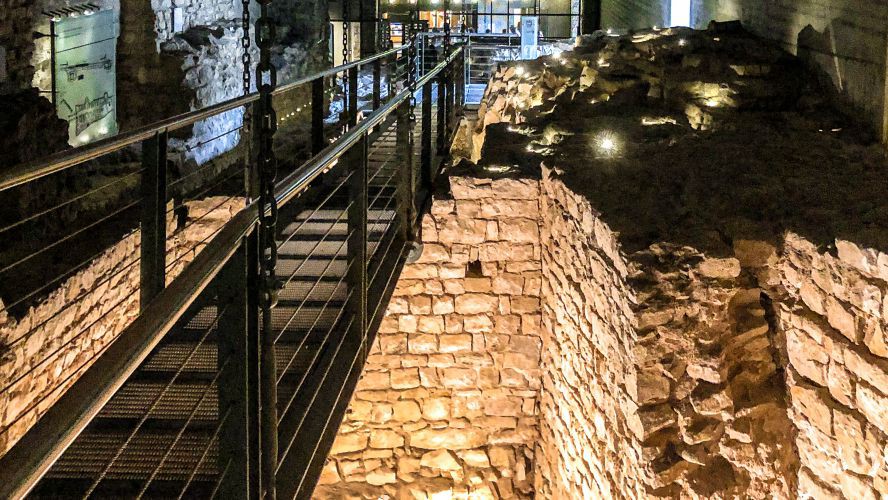 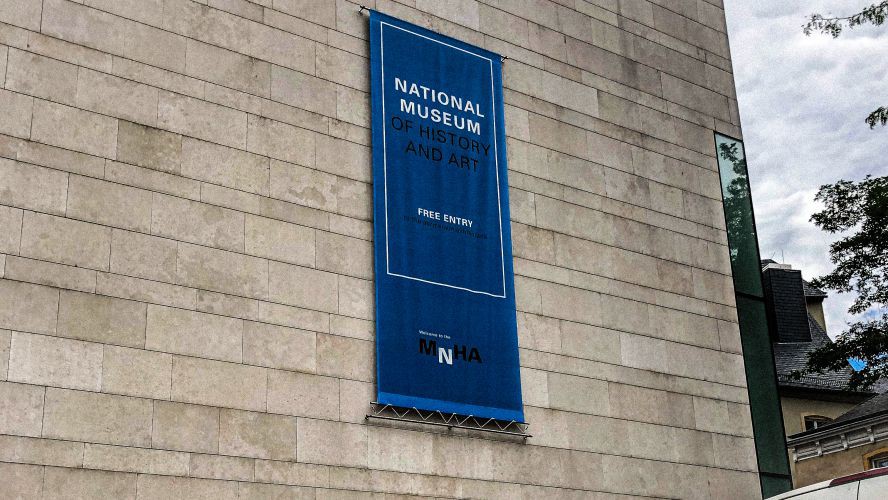 What Did We Miss?

This area was in the center of many WWII battles, most significantly, the Battle of Bulge. There are numerous sites and memorials around Luxembourg and Belgium that mark events of WWII.

There is a museum dedicated to General George S. Patton, who is buried in Belgium.

If you haven't had your fill of castles, there are 130 around Luxembourg; many are privately owned or turned into hotels. Vianden is the most popular.

​I hope you get to visit Luxembourg. It will impress you as it has us.

If you have visited Luxembourg, please share it in the comments!

Look out for more of our trips around France and Europe.

In the meantime, happy Traipsing the Globe!